1 European Empire Building Leads to WWI
SS6H6d. Explain the impact of empire building in Africa and Asia on the outbreak of WWI

5 On the rise in Europe: Nationalism: love of one’s country Militarism: using strong armies and threats of war European countries signed treaties agreeing to help each other in case of attack.

7 The Great War (WWI) 1914-1918 Causes:
MAIN : Militarism, Alliances, Imperialism, and Nationalism Tensions over territory in the Balkans Assassination of Archduke Franz Ferdinand of Austria and his wife by Gavrilo Princip, a Serb

10 THE U.S. TRIES TO STAY NEUTRAL
Most Americans supported the ALLIES. But - many German-Americans and Irish-Americans were anti-British, supporting the CENTRAL powers. Britain’s navy stopped all shipping carrying weapons to Europe.

11 WORLD WAR I: U.S. NEUTRALITY
Later, Britain stopped all trade with nations on the European continent. The US protested, but Britain remained careful in its relations with the U.S. Germany tried to break the British blockade by using the submarine, called U-BOAT.

12 Why the U.S. Entered the War
In May, 1915, Germany sank the British liner LUSITANIA. 1198 died, including 128 Americans. As Wilson campaigned for re-election, he began a naval rearmament program.

13 U.S. Enters the War Germany sank all ships in the waters around Britain. This UNRESTRICTED SUBMARINE WARFARE made Wilson break off diplomatic relations with Germany. Wilson asked Congress for a declaration of war, which he got on April 6, 1917.

14 THE U.S. FIGHTS TO VICTORY
American DOUGH BOYS began fighting in Europe in 1918. 1918: Russia pulled out of the war after the Communists took power. In Belgium and France, TRENCH WARFARE led to stalemate. Germany first used POISON GAS in 1915, and Britain introduced the tank in 1916.

15 War Ends The turning point came in mid- 1918 in favor of the Allies.
Germany signed an ARMISTICE at eleven o'clock on the eleventh day of the eleventh month of 1918, which ended the war (now called Veteran’s Day). The Allies won. Germany was blamed for the war. 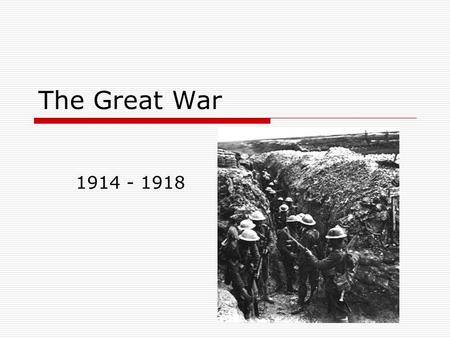 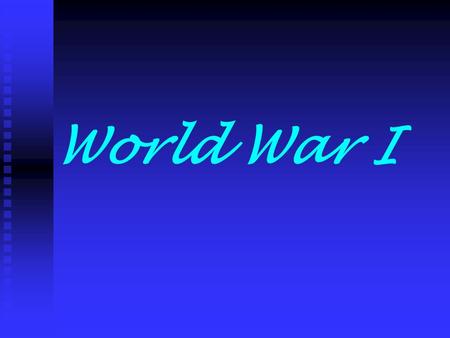 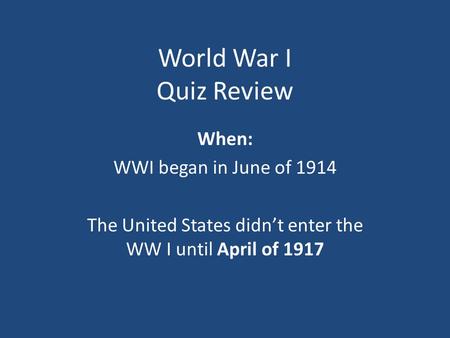 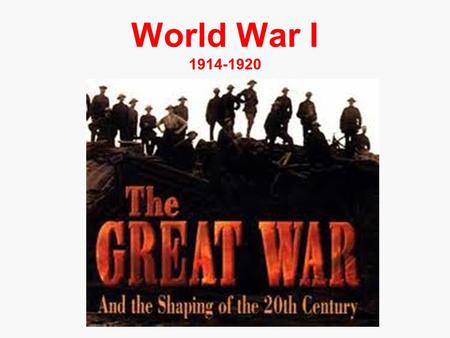 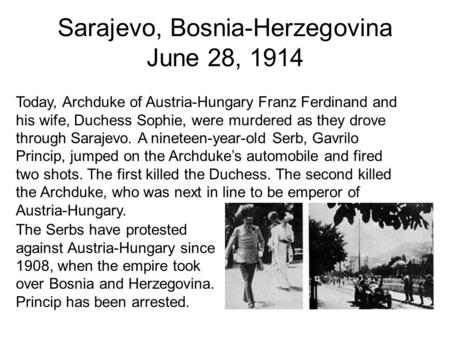