World War I 1914 -1918. Intro: Europe Before the War Germany – Strongest Army; Allied to Austria- Hungary (AH); Wanting to establish itself as a European/World.

Presentation on theme: "World War I 1914 -1918. Intro: Europe Before the War Germany – Strongest Army; Allied to Austria- Hungary (AH); Wanting to establish itself as a European/World."— Presentation transcript:

2 Intro: Europe Before the War Germany – Strongest Army; Allied to Austria- Hungary (AH); Wanting to establish itself as a European/World power Russia – Large/not as strong; allied to France and Serbia; fairly unstable population; people unhappy; Protective of Slavic nations France - Fairly strong power; Also loosely allied with Great Britain; Lost to Germany in 1871 war; Looking to get back at Germany for that loss and regain lost lands Great Britain – Best navy in world; competing with Germany for colonies; allied to Belgium; wanting to maintain its position as a strong world power through naval superiority Austria-Hungary – Big military but not too strong; does not like Serbia; aging empire looking for a boost in pride

5 2. The War Expands Germany was unable to quickly defeat France Russia entered the war in the east Germany had to fight on two sides (2-Front War) A stalemate started, Both sides dug trenches Both tried attacking the trenches - failed “Over the Top” offensives resulted in Thousands of casualties Neither side had the offensive power to break the stalemate (defeat the trench) Defensive weapon – Machine gun too powerful No Man’s Land –area between trenches = wasteland Battle lines “stayed the same” for the next 3 years But both sides still kept attacking each other

8 4. America Favors the Allies The US wanted to remain neutral during the war but favored the allies over Germany for three reasons 1Germany attacking Belgium upset many Americans (attack a Neutral? US is Neutral too!) 2Unrestricted Submarine Warfare USW = Germany’s version of a blockade Sink anyone trading with the Allies (non-military ships too – including American ships) Wilson warned Germany = “You’ll be responsible for any loss of American life” 3 Stronger connection to British culture US favored the Allies but vowed to remain Neutral But the US traded war supplies to the Allies Germany viewed America’s decision as not being neutral – viewed them as the enemy

9 5. German Subs Anger the U.S. German subs continued to hunt Allied ships May 7, 1915 – British passenger ship the Lusitania was sunk by a German sub 1,200 died including 128 Americans Other ships sunk too – some were American ships President Woodrow Wilson threatened Germany with war unless they stopped their USW Germany promised to follow the rules of Sub warfare (the promise was known as the Sussex Pledge) By 1917, Germany was losing the war Returned to using USW as a way to win (“our only chance”) Germany was hoping to win the war before the U.S. could mobilize and get to Europe

11 6. The Final Straw against Germany (Feb. 24, 1917) GB intelligence intercepted a coded message between Germany and Mexico The Zimmerman Telegram Germany offered TX, AZ, NM to Mexico if they attacked the US Germany hoped a war with Mexico would keep US troops out of Europe America would be forced to defend their home territory Mexico never agreed to the offer, but the damage was done Wilson was upset that Germany was trying to line up countries against them Went to Congress to ask them to declare war

Download ppt "World War I 1914 -1918. Intro: Europe Before the War Germany – Strongest Army; Allied to Austria- Hungary (AH); Wanting to establish itself as a European/World." 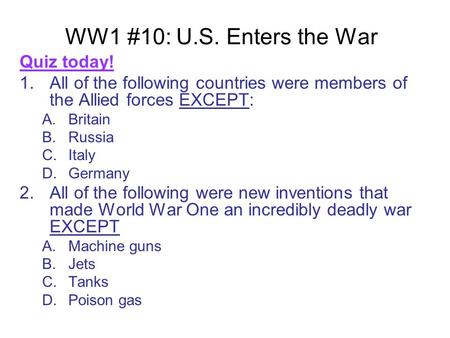 WW1 #10: U.S. Enters the War Quiz today! 1.All of the following countries were members of the Allied forces EXCEPT: A.Britain B.Russia C.Italy D.Germany. 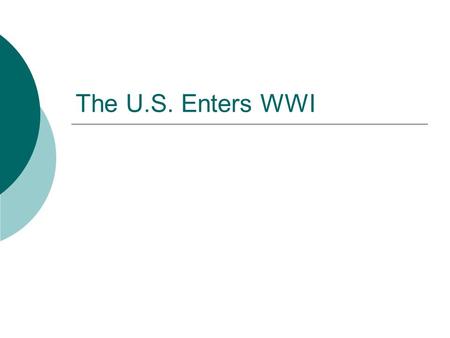 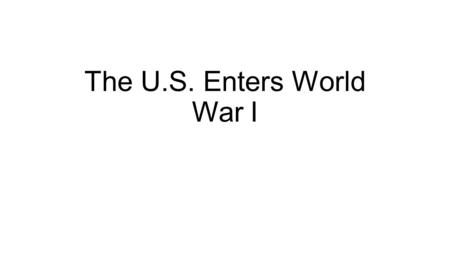 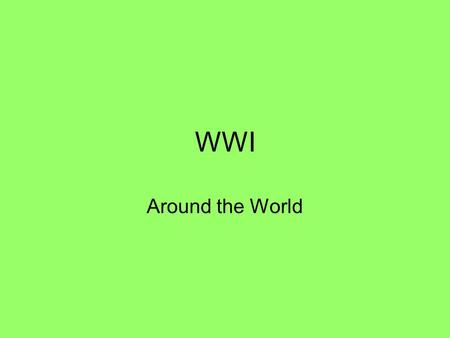 WWI Around the World. Warm Up What were the 4 causes of WWI? A =MAIN What were some of the new weapons used in WWI? Why did Princip assassinate Franz. 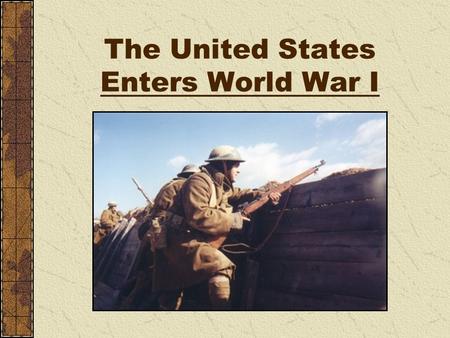