4 PLOT THE SERIES OF EVENTS IN THE STORY

5 EXPOSITION Introduces the setting and provides background information. Conflict is introduced as well.

7 CLIMAX Turning point of the story

11 CONFLICT-TENSION OR PROBLEMS IN A STORY Internal- Struggles within his/her own mind. man vs. himself External- Struggles a character must deal with outside of himself or herself Man vs. man Man vs. nature Man vs. society

12 PLOT EFFECTS Suspense- The tension a reader feels as conflicts and complications grow in a story Foreshadowing- Clues given in a story that may indicate the outcome of a plot. Flashback- When the sequence of events in a story is interrupted to return to an earlier event.

13 SETTING Time and place of the story- The mood- The feeling of the story Time- Time of day, day of week, year etc. Location-The building, region, country Atmosphere- The weather or psychological feeling Historical setting- Historical events that happened when story was set.

18 STATIC VS DYNAMIC Static characters do not change in a story Dynamic characters experience some personal change in the story. Ex. learn a lesson, feel regret, become confident etc.

20 CHARACTER AND STYLE Foil- A character who contrasts with the main character. Epiphany- A sudden realization for a character that may help them resolve the conflict

22 FIRST PERSON POINT OF VIEW The narrator is the character in the story. “I”

23 THIRD PERSON, LIMITED The narrator, who is not a character in the story, tells the story from the outside, from the perspective of ONE character

24 THIRD PERSON, OMNISCIENT The narrator, who is not a character in the story, tells the story from the outside, from the perspective of several characters. The narrator is all knowing.

26 STREAM OF CONSCIOUSNESS A literary style that presents a character's continuous random flow of thoughts as they arise. It is a technique an author uses to “get inside a character’s head” These thoughts are usually expressed in a flow of words without transitions

27 STREAM OF CONSCIOUSNESS VS. OTHER STYLES 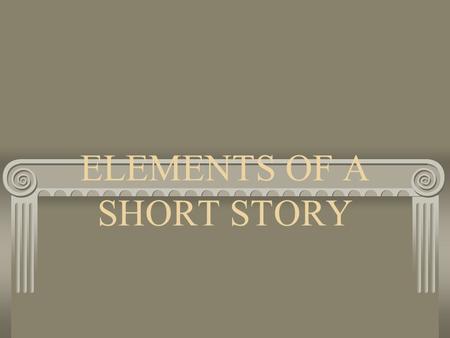 ELEMENTS OF A SHORT STORY. PLOT Series of related events that make up a story. Logical series that has a beginning, middle, and end. 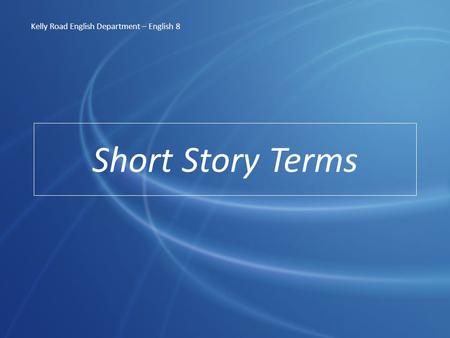