2 The Journey to the Holy Land and Jerusalem To provide security for religious European Pilgrims To get land, wealth, treasure, trade routes, and adventure

4 Few knights knew what to expect. Dressed in full armor Abandoned heavy outfits before reaching the Holy Land Peasants and poor on foot with no weapons and little money many died along the way others captured and sold into slavery

6 http://weekly.ahram.org.eg/2000/481/boo6.jpg 1099 The Capture of Jerusalem What castle defenses and what siege weapons do you see in this picture? Many Muslims and Jews who lived in Jerusalem were killed.

8 http://www.chriscollingwood.com/images/dhm1016.jp g http://www.mondotime.com /1200AD/f17.jpeg Richard the Lion Heart and the Third Crusade (1189-1192) Started out with England, Germany, and France as allies Only England was left when they reached the Holy Land Battles with Saladin over Jerusalem Fighting results in a truce Jerusalem remained under Muslim rule European Christians able to visit Jerusalem safely How can you tell Richard is a Christian?

9 Other crusades exist: Peasants and Children ’ s Crusades “ Fourth Crusade ” Europeans on crusade to get treasure Only reached Constantinople, a Christian city Crusaders sacked (attack and steal from) the city Constantinople was on the same side as they were, Christians Crusaders never reached the Holy Land Crusades ended afterwards when Muslims regained control of all of their former lands and Christians lost faith in the Church

13 necrobones.com/knights/ http://www.irregularminiatures.co.uk/images/25mm% 20C9.jpg Review Crusaders set out to win back Holy land with a Holy war They succeeded with the First Crusade The rest did not turn out well and they lost Jerusalem Muslims taught Europeans new ideas Holy Land ends up in Muslim rule, but Christians and Jews allowed to visit and live there. Question: Do you think that tensions today between Christians and Muslims could have begun during the Crusades?

14 http://www.kuttersknives.com/pr oduct_images/m_9776.jpg The End For more information on the Crusades, use this website link: http://www.medievalcrusades.com/ 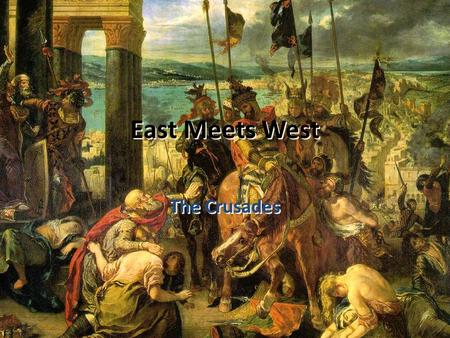 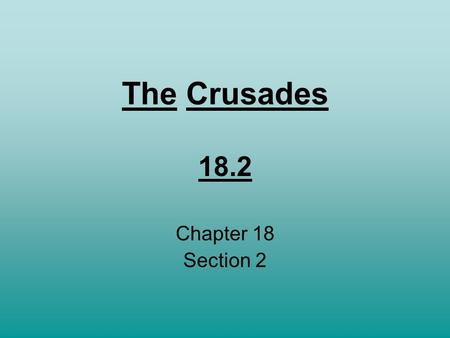 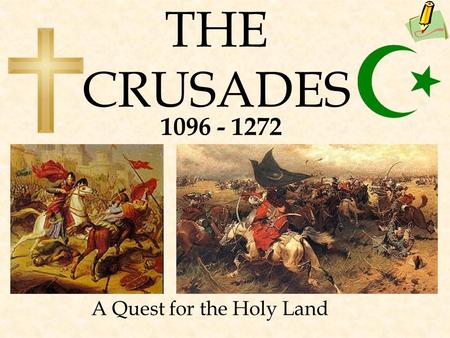 THE CRUSADES A Quest for the Holy Land