2 CONFLICT A struggle between opposing forces Types : –1) External – character struggles against another person or some outside force –2) Internal - involves a struggle within a character Kinds: –1) Person vs. Person/Creature– ex. Spiderman vs. Green Goblin –2) Person vs. Nature – ex. New Orleans vs. Hurricane Katrina –3) Person vs. Society (social) –ex. Ruby Bridges vs. Southern Segregation –4) Person vs Himself/Herself – ex. Student lies to parents about test grade 5) Person vs. God/Higher Power * Stories can include more than one kind of conflict!!!

3 PLOT Sequence of related events that make up a story A.Exposition = provides needed background information; presents a character in a situation that contains the possibility of action. Introduction of conflict. B. Rising Action =develops the basic situation; the conflict intensifies C. Climax= the turning point of the story; a change occurs. (the most tense or exciting part of the story when something happens to decide the outcome of the conflict) D.Falling Action= the action after the climax; loose ends are tied up E.Resolution= conflicts are often resolved.

8 Theme The meaning, moral, or message about life or human nature that is communicated through the literary work Most themes are not directly stated in the text – you need to infer what it might be based on… the title of the story changes the characters go through important phrases about freedom, courage, love, family, friendship, loyalty, etc.

9 Point of View The perspective from which a story is told Types: 1)First-person point of view - is in use when a main character narrates the story with I-me-my-mine in his or her speech. 2)Third-person point of view – told by a narrator outside of the story; uses the third person pronouns he, she and they to tell the story Omniscient: the author has access into every action and thought of all the characters. He/she is all-knowing, in other words. Limited Omniscient: insight into every thought is now limited to just one character in the story, or maybe a few different characters separated by parts of the book. Author has significant insight but is not ALL knowing. 3)Second-person point of view - Using this viewpoint, the author control all of the information and gives the reader whatever they want. (*rare)Ex.“You open your eyes and the sun is already high in the sky. You’ve slept away the whole morning. 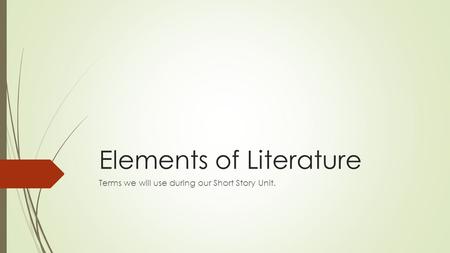