Presentation on theme: "Discover the factors that led to the outbreak of war in Europe. Find out why World War I was deadlier than any earlier conflict. Learn how the United States."— Presentation transcript:

1 Discover the factors that led to the outbreak of war in Europe. Find out why World War I was deadlier than any earlier conflict. Learn how the United States moved from neutrality to involvement in the war. Objectives

3 What were the causes of World War I? In the early 1900s, several factors led to rising tensions among European nations. In 1914, these tensions erupted into the largest war the world had yet seen.

4 The following factors caused tension in Europe. Imperialism Nations competed for trade and territory. Militarism Nations built up their armed forces. Alliances Nations promised to aid one another in conflict.

5 The spark that set off the war occurred in Sarajevo, Bosnia. July 29, 1914 June 28, 1914 A Serbian nationalist assassinated Archduke Franz Ferdinand, heir to the throne of Austria-Hungary. Austria-Hungary declared war on Serbia.

7 The alliance system drew more than 20 countries into war. Two sides formed: the Allies and the Central Powers.

8 Fighting began in France. Both sides hoped for a quick victory, but neither could gain an advantage. By early September, German forces were within 30 miles of Paris. French and British troops halted the German advance. This deadlock, or stalemate, lasted for over three years.

9 The stalemate was made worse by the use of trench warfare. Central Powers’ trenches Allies’ trenches They fought back and forth over the same land. https://www.youtube.com/watch?v=s77y2zU2a8ghttps://www.youtube.com/watch?v=s77y2zU2a8g (Hell in the Trenches 6:23 min) Neither side could successfully cross no man’s land. no man’s land

10 Technological advances such as airplanes, tanks, and machine guns made the war more lethal. Poison gas was the most feared weapon. Gases caused blindness, choking, and blisters. In 1925, many nations agreed to ban chemical weapons in war.

11 President Wilson proclaimed U.S. neutrality, but not all Americans agreed. Americans had ethnic loyalties to one side or the other. Many Americans began to take sides. Britain used propaganda to win American support and exaggerated or made up horrifying tales about the Central Powers.

12 Allies Even though the U.S. was neutral, they supported the Allies by trading with them. United States Central Powers Most American trade was already with the Allies. Then, Britain set up a blockade of German ports.

13 Conflict grew between Germany and the United States. In 1915, Germany sank the Lusitania, killing 128 Americans. The U.S. was able to convince Germany not to target neutral ships. In 1917, Germany began targeting U.S. merchant ships again, and the U.S. cut off diplomatic relations.

14 Events in 1917 finally led America to enter the war. Britain intercepted the Zimmerman Telegram. Zimmerman Telegram Germany asked for Mexico’s help in the war. In return, it would help Mexico take U.S. lands. The British showed it to President Wilson.

17 A revolution in Russia removed the final obstacle to America’s entry into the war. Russia’s tsar was a tyrant who opposed democracy. In March 1917, the tsar was overthrown. The U.S. would not have to side with a tyrant to join the Allies.

18 On April 2, 1917, President Wilson asked Congress to declare war against the Central Powers. Wilson’s goal was to fight “…for the rights of nations great and small and the privilege of men everywhere to choose their way of life and of obedience. The world must be made safe for democracy.”

Download ppt "Discover the factors that led to the outbreak of war in Europe. Find out why World War I was deadlier than any earlier conflict. Learn how the United States." 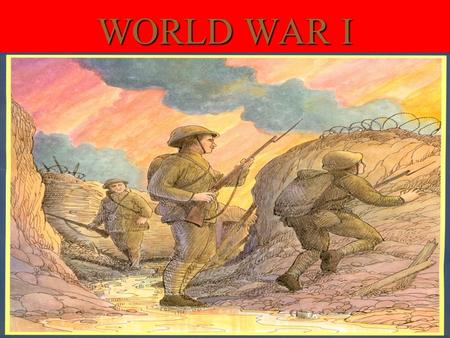 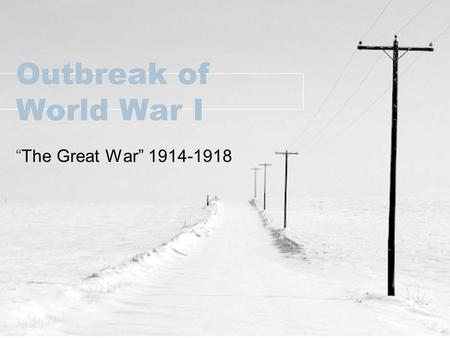