3 Causes of World War I Imperialism –competition for colonies.
Nationalism – extreme patriotism; prove they were the best Militarism –powerful military primary goal; built up armies and navies. Alliances – bound European nations together. An attack on one nation forced its allies to come to its aid.

5 America’s Path to War Key? – What events brought America into the war?
Woodrow Wilson policy of neutrality. Sinking of the Lusitania by a German U-boat turned Americans against Germany. Wilson stayed neutral and was re-elected with the campaign slogan, “He kept us out of war. Germany resumed submarine warfare.

7 Revolution in Russia In March 1917 Czar Nicholas was forced to step down. Vladimir Lenin took power with a Communist government. Communism political system in which a single party holds power and the state controls the economy with the goal of common ownership of all property. Russia pulled out of the war by signing the Treaty of Brest-Litovsk. 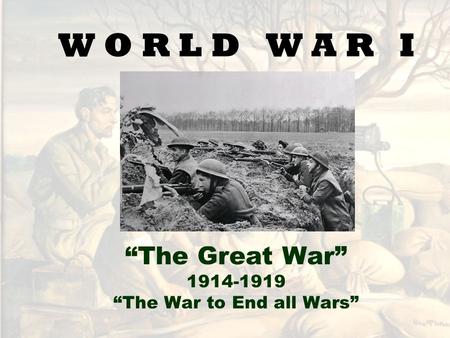