3 Muslim armies capture many countries After Muhammad’s death, Abu Bakr became the first caliph, the title that Muslims use for the highest leader of Islam. Caliphs were not religious leaders, but political and military leaders. Abu Bakr directed a series of battles against Arab tribes who did not follow Muhammad’s teachings.

4 Growth of the Empire Muslim armies battled tribes that did not follow Muhammad’s teachings. The Muslim armies united Arabia, then defeated the Persian and Byzantine empires. Conquered people could not build new churches or dress like Muslims. Christians and Jews could continue to practice their own religion. After years of fighting Muslim armies, many Berbers, a native people of North Africa, converted to Islam and joined forces with the Arabs. A combined Berber and Arab army invaded Spain and conquered it in AD 711.

6 A Mix of Cultures As Islam spread through trade, warfare, and treaties, Arabs came into contact with people who had different beliefs and lifestyles. Language and religion helped unify many groups that became part of the Islamic world. Muslims generally practiced tolerance, or acceptance, with regard to these people. Jews and Christians, in particular, could keep their beliefs.

7 Growth of Cities Baghdad Capital of Islamic Empire One of the world’s richest cities through trade and farming. Center of culture and learning Cordoba By the AD 900s, was the largest and most advanced city in Europe Showplace of Muslim civilization

8 Expansion of Islam The great era of Arab Muslim expansion lasted until the 1100s. Three non-Arab Muslim groups built large, powerful empires that took control of much of Europe, Asia, and Africa.

9 Ottoman Empire Ottomans were Muslim Turkish warriors who took territory in the mid-1200s. The Ottomans were aided by slave soldiers called Janissaries. They had new gunpowder weapons. Mehmed II and Suleyman I led conquests that turned the Ottomans into a world power. During Suleyman’s rule, the Ottoman Empire reached its height. Ottomans took control of the eastern Mediterranean and pushed farther into Europe from 1520–1566. They would control these areas until the early 1800s.

10 Safavid Empire Begins Safavids were Persian Muslims. A conflict arose over who should be caliph among the Safavids, Ottomans, and other Muslims. Islam split into two groups. The Shia thought that only members of Muhammad’s family could become caliphs. The Sunni thought it did not matter as long as they were good Muslims and strong leaders. 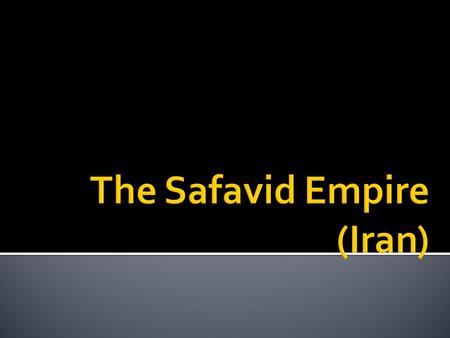 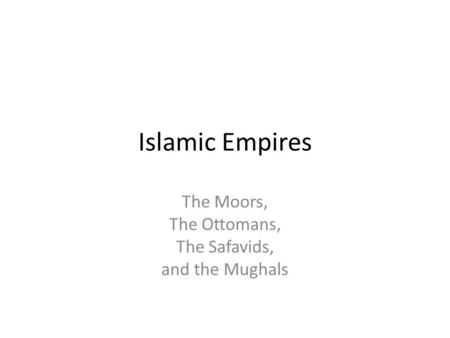 The Moors, The Ottomans, The Safavids, and the Mughals 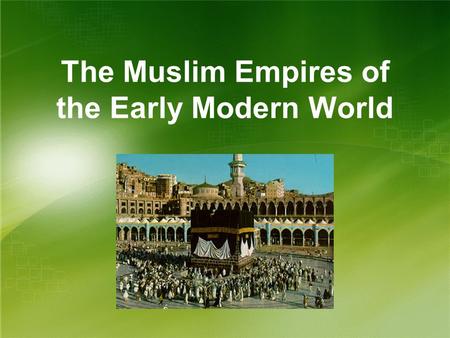 The Muslim Empires of the Early Modern World. The Ottoman Empire The Challenger to Christian Europe. 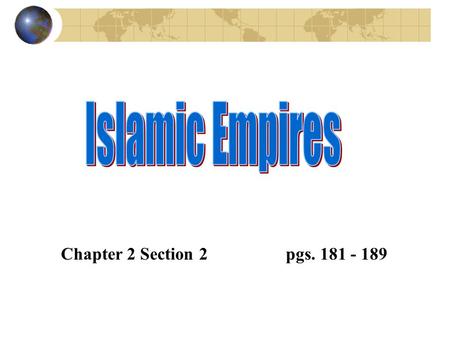 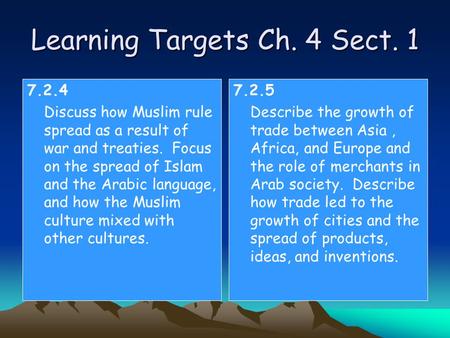 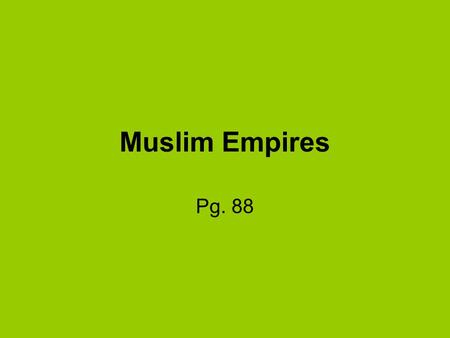 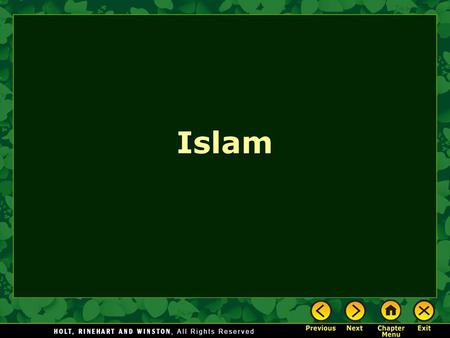 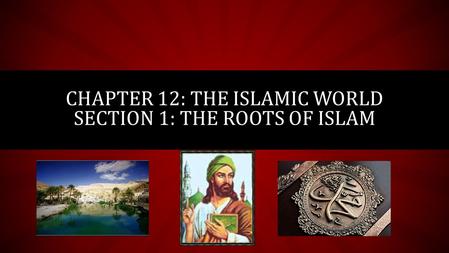 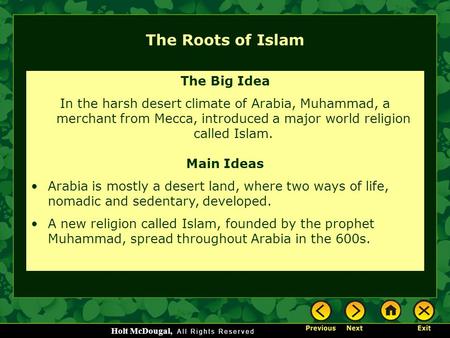 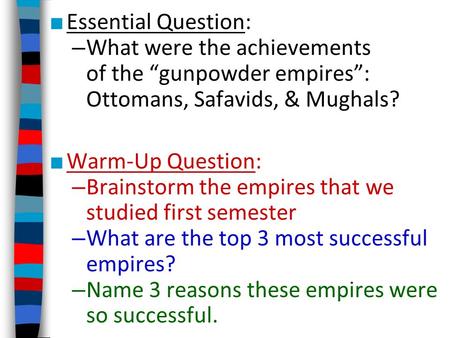 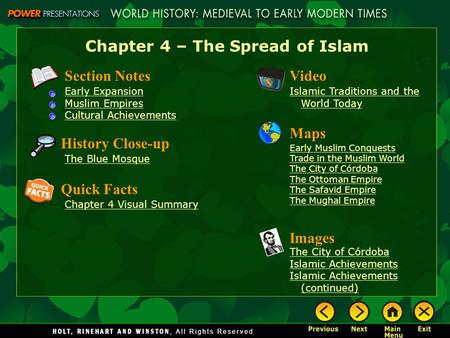 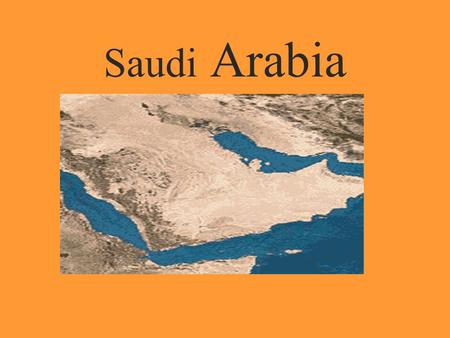 Saudi Arabia. Origin of Name The name of the country comes from the ruling royal family AL-Saud It is the world’s only country named after its ruling. 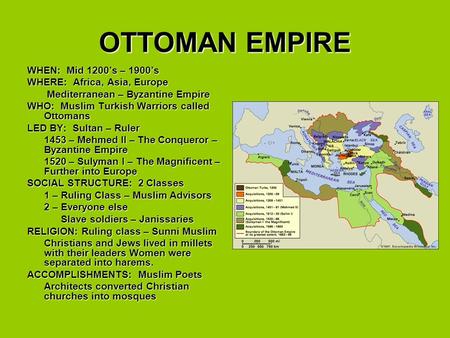 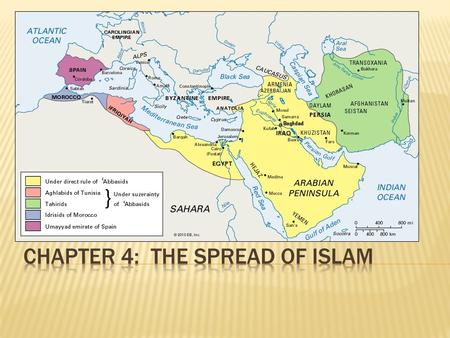 Chapter 4: the Spread of Islam