Presentation on theme: "THE MIDDLE AGES. Aka the Medieval Period Lasted from 5 th to 15 th centuries Began with the fall of the Western Roman Empire to Germanic tribes Ended."— Presentation transcript:

4 THE MIDDLE AGES IN THE EASTERN ROMAN EMPIRE Eastern Roman Empire, centered around Constantinople, existed long after Western Roman Empire Became known as the Byzantine Empire Lasted until 1453 Both Greek and Christian state Christian Church of Byzantine Empire came to be known as Eastern Orthodox Church Did not believe that pope was the sole head of Christianity Caused them to have a schism (separation) with the Roman Catholic Church The Byzantine Empire’s greatest external threat came from the Seljuk Turks in Asia Minor 1071: Seljuk Turks take over Leads to the Crusades

5 WHAT WERE THE CRUSADES? Military expeditions Launched by European Christians Goal was to win back the Holy Land from Muslim control Holy Land = Jerusalem and surrounding areas This is where Jesus lived: sacred to Christians

7 WHO WERE THE SELJUK TURKS AND WHAT DID THEY DO? Persian Muslims Did not allow Christian pilgrims into Jerusalem Persecuted Christians who were there Violence escalates and 3,000 Christians are massacred Causes the Byzantine emperor Alexis to send a letter to Pope Urban asking for help

8 POPE URBAN II AND THE START OF THE CRUSADES 1095: Pope Urban II gives a speech at Clermont, France Calls for European knights to go and free Holy Land from Muslims Saw this as a great way for the knights to stop fighting each other Promises anyone who goes on the Crusade that all their sins will be forgiven and that they are guaranteed to get into heaven

9 THE KNIGHTS’ CRUSADE VS. THE PEOPLE’S CRUSADE The knights take time to organize their crusade While they are preparing, a preacher named Peter the Hermit calls for a “People’s Crusade” Peasants and serfs leave their manors to join him Peter leads the unorganized mob towards the Holy Land Loot towns and kill Jews along their journey Their reasoning is that if they are going to attack Muslims they should be punishing the Jews for what they did to Jesus as well Muslim Turks ambush People’s Crusade 20,000 Crusaders are executed or sold into slavery

10 THE FIRST CRUSADE Knights finally get organized and begin march towards Holy Land Journey lasts 3 years Fight many battles along the way 1099: Jerusalem falls to Crusaders Crusaders show no mercy 10,000 inhabitants of Jerusalem are slaughtered

12 THE THIRD CRUSADE Crusaders led by King Richard “The Lion Heart” of England Richard and Saladin fight to a draw Agree that Jerusalem will remain under Muslim control Unarmed Christian pilgrims will be allowed in Jerusalem There would be several other attempts at Crusades, all of which failed Including Children’s Crusades

13 EFFECTS OF THE CRUSADES Increased trade with the East Introduced the use of money instead of bartering New ideas and technology from Muslims were brought back to Europe Broke down feudalism Allowed kings to create stronger central governments Paved way for development of nation-states By mid-1400s, 4 strong nation-states emerged in Europe Portugal Spain England France

Download ppt "THE MIDDLE AGES. Aka the Medieval Period Lasted from 5 th to 15 th centuries Began with the fall of the Western Roman Empire to Germanic tribes Ended." 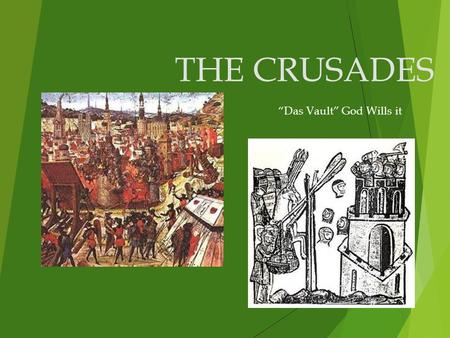