5 Deprived Child Deprived child is a legal name for a child under the age of 18 who is without adequate food, shelter, or protection: The state prosecutes parents/guardians who neglect children under their care. DFCS (Georgia’s Division of Family and Children Services) helps children who are abused. A guardian ad litem is a person appointed by the juvenile court to represent a child’s best interest in any legal proceedings.

6 Unruly Child A child who commits an act that would not be considered a crime if committed by an adult is called an unruly child or a status offender. Behaviors displayed by an unruly child 17 or under: absent from school on a regular basis without legitimate excuse (truant) run away from home disobeys reasonable commands from parent/guardian hangs around public places between midnight and 5:00 a.m. goes to a bar without parent or possesses alcoholic beverages, disobeys terms of supervision contained in a court order Unruly behaviors may be handled through informal adjustment: Family is given counseling and a plan of supervision for a child. A period lasting at least 90 days and may be extended another 90 days. The juvenile has to follow certain conditions and restrictions.

8 Section 2: Juvenile Courts and Justice
Essential Question: How are juveniles treated differently under our judicial system?

10 The Rights of Juveniles
Amendments 1, 4, 5, and 6 of the U.S. Constitution sets out rights of juveniles: to have their cases decided quickly for their cases to be decided by a judge, not a jury to be notified of charges against them to be protected against self-incrimination to have the right to an attorney to confront and question witnesses against them to present a defense, introduce evidence, and testify on their own behalf for all hearings to include a parent or guardian to have an attorney who is appointed by the court if parent or guardian cannot afford a lawyer

11 Steps in the Juvenile Justice System
Reasonable suspicion is something more concrete than a “hunch” but less certain than probable cause. A regional youth detention center (RYDC) is a holding facility for juveniles. Intake The juvenile court designates a court officer (intake officer). Procedures of intake officer include: investigating charges, determining which of 4 options to follow, and deciding whether to release juvenile into custody of parents or guardian or detain at the RYDC. Detention Hearing Within 48 hours of being detained at an RYDC, a juvenile court judge reviews the intake officer’s report. Judge decides whether to detain juvenile (hearing takes place within 10 days) or release on bail (hearing takes place within 60 days).

12 Adjudicatory Hearing Elements of the adjudicatory hearing:
procedure (somewhat like a trial) those present include the juvenile, juvenile court judge, attorneys, witnesses, parents or guardian judge reads charges stated in the petition; juvenile is asked to admit or deny charges if juvenile denies charges, hearing continues judge hears case; decides if juvenile charges are a delinquent act if juvenile is found not guilty, he/she is released; if found guilty, court schedules a hearing to determine consequences

13 Dispositional Hearing
Components of a dispositional hearing: procedure similar to sentencing in adult court judge determines remedy / solution for offense prosecutor and defense can call witnesses; present evidence that might influence court’s plan judge has 5 – 6 options to use to decide the best interests for juvenile and society one option is probation-comes with restrictions; juvenile’s behavior closely monitored 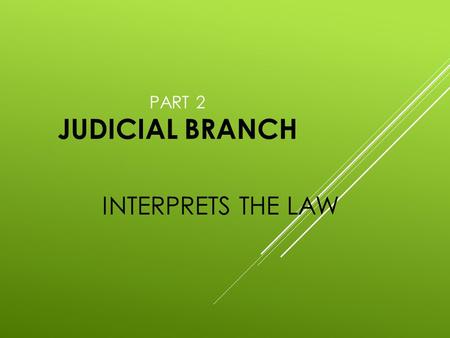