Presentation on theme: "Bell Ringer 1.What states surround Virginia today? 2.What do you think a cash crop is? (definition or example) 3.What is your definition of slavery?"— Presentation transcript:

1 Bell Ringer 1.What states surround Virginia today? 2.What do you think a cash crop is? (definition or example) 3.What is your definition of slavery?

3 Explain Virginia’s development; include the Virginia Company, tobacco cultivation, relationships with Native Americans such as Powhatan, development of the House of Burgesses, Bacon’s Rebellion, and the development of slavery.

4 Virginia Location: Chesapeake region of North America Settled in 1609 by the Virginia Company Many of the settlers were “gentlemen” The first English settlement was Roanoke The first permanent English settlement: Jamestown, on the banks of the James River http://www.youtube.com/watch?v=ZX MjQWr3Z6Y

5 The Virginia Company The Virginia Company was formed with a charter from King James I in 1606. It was a joint-stock company in charge of settling Virginia. It was in charge of finding people willing to go, supplies needed for the journey, and ships. As people died on the venture and after arrival, support for the Virginia Company decreased. The charter was revoked in 1624 and Virginia became a Royal Colony. http://teachertube.com/viewVideo.php?title =Jamestown_Settlement&video_id=19705

6 3 Minute Review What was the first permanent English settlement in North America? What is a joint-stock company? Who is the leader of a Royal Colony?

8 Bell Ringer Where was the first PERMANENT colony located in North America? What was the name of the English firm that planned to make money by sending people to America to find gold and other natural resources? What crop became an important source of wealth for Virginia?

10 Settlers Relations with Native Americans, cont. The Native Americans began attacking settlers, killing their livestock, and burning plants. The settlers attacked back and when Chief Powhatan died hostilities rose. Once Powhatan died, his brother, Opechancanough, became chief. He and his tribe waited until 1622, then they fiercely attacked killing 350 colonists. A direct result was that the colony then went under Royal control.

12 Governor Berkeley managed to stay governor of the House of Burgesses from 1661-1676 with no elections. The western planters had no where to go to vent their concerns so they began to rebel in other ways. Governor Berkeley was threatened at gunpoint and Jamestown was burned in 1676. Bacon was elected to the House of Burgesses for a short time after the burning of Jamestown. He left Jamestown to attack innocent Native American tribes. Bacon’s Rebellion The House of Burgesses was intimidated by Bacon and passed laws that he demanded to be passed. Upon Bacon’s untimely death the laws were repealed. Berkeley was called back to England by the King, where he later died.

13 Beginnings of Slavery Before slavery there was indentured servitude. Indentured servants often worked on tobacco plantations to pay off their journey to America. People who had lived in Barbados and Jamaica and were now working as planters in America, decided to import slaves from West Africa to cultivate rice in South Carolina and the low country of Georgia.

14 Closing 1.Why did the Virginia Company come to America to colonize? 2.Who helped the settlers survive? 3.What was the most profitable cash crop?

Download ppt "Bell Ringer 1.What states surround Virginia today? 2.What do you think a cash crop is? (definition or example) 3.What is your definition of slavery?" 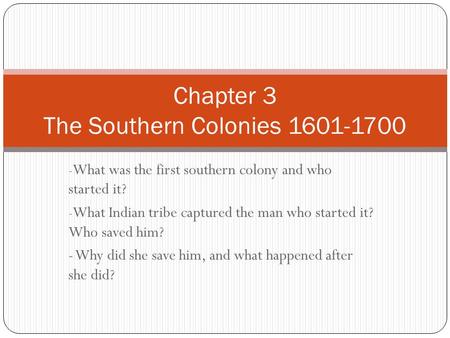 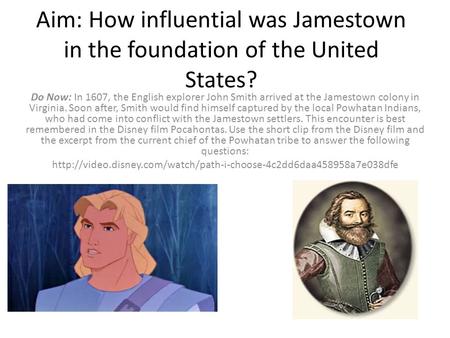 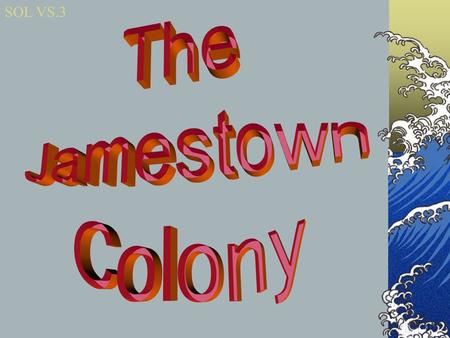