Presentation on theme: "The History of Africa Under Colonialism “Around the World” Review Game."— Presentation transcript:

2 Around the World You need a blank sheet of paper Number your paper 1-27 Circle the number on your paper that matches the number taped to your desk Answer each question on your paper If you do not know the answer, write the question instead (you can look up the answer later) Advance to the next highest number when the bell rings

3 Let’s Check Our Answers 1)What are 2 impacts of the Pan-Africa Movement on the continent of Africa? ~ Africans within the continent joined together to reclaim their traditions and culture. Africans outside the continent felt a bond with Africa and a responsibility to help. 2)What role did Nelson Mandela play in the end of Apartheid? ~ He lead the resistance to Apartheid, was imprisoned for 27 years, and became South Africa’s first black president.

4 3) What role did F.W. de Klerk play in the end of Apartheid? ~ He was the president that ended Apartheid. 4) How did nationalism lead to independence in South Africa, Kenya, and Nigeria? ~ Africans felt a sense of pride for their country and joined together to push out the European colonizers. 5) How did European partitioning of Africa contribute to conflict, civil war, and to artificial political boundaries? ~ European countries divided Africa with no concern of ethnic, tribal, or religious differences as well as nature boundaries. These groups fought for control after colonizers left.

5 6) The Pan-African Movement was similar to what other movement we studied? ~ DO NOT ANSWER THIS ONE 7) What was the goal of the Pan-African Movement? ~ To unite Africans and those of African descent, whether living within the continent or not, in a sense of responsibility to Africa. 8) Define: Pan-African Movement ~ Movement dedicated to establishing independence for African nations and cultivating unity among black people throughout the world.

6 9) List 2 things you remember about F.W. de Klerk. ~ He was the president who freed Nelson Mandela from prison and ended Apartheid. 10) List 2 things that you remember about Nelson Mandela. ~ He fought against Apartheid and became South Africa’s first black president. 11) In which decade did Nigeria, Kenya, and South Africa gain their independence? ~ 1960s

8 15) (T/F) After most African countries won their independence, the new governments had few problems. ~ False 16) (T/F) Most Africans were happy under European colonial rule and did not want independence. ~ False 17) (T/F) The Europeans took African tribal boundaries into consideration when they created. ~ False

9 18) (T/F) By the early 1900s, every country except Ethiopia and Liberia were under European colonization. ~ True 19) (T/F) Many Europeans treated Africans cruelly. ~ True 20) (T/F) When the Europeans partitioned Africa, their goal was to help the Africans. ~ False

10 21) (T/F) A war between ethnic groups in Nigeria would be considered a civil war. ~ True 22) From which European country did Nigeria, Kenya, and South Africa gain their independence? ~ Great Britain 23) Define: independence ~ Freedom from the control of another country

11 24) Define: nationalism ~ Extreme pride and loyalty in your country 25) What were 2 bad effects of the “Scramble for Africa”? ~ Resources were stolen from Africa. Africans lost their culture and traditions and were treated as second class citizens. 26) What was 1 good effect of the “Scramble for Africa”? ~ European colonizers built railroads, highways, and ports which they left behind.

12 27) What were 3 causes of the “Scramble for Africa”? ~ European countries wanted to maintain their power, take natural resources from Africa, expand their territories, and believed that Africans did not own the land.

Download ppt "The History of Africa Under Colonialism “Around the World” Review Game." 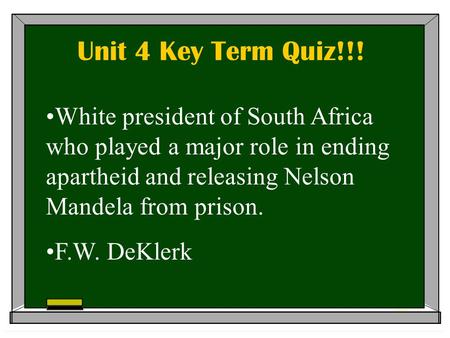 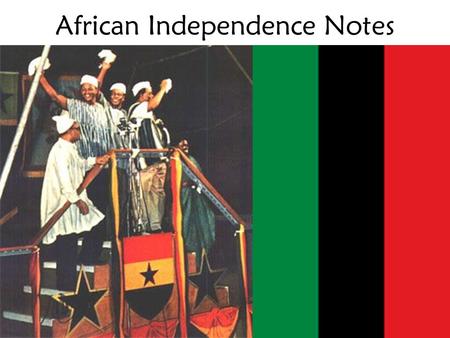 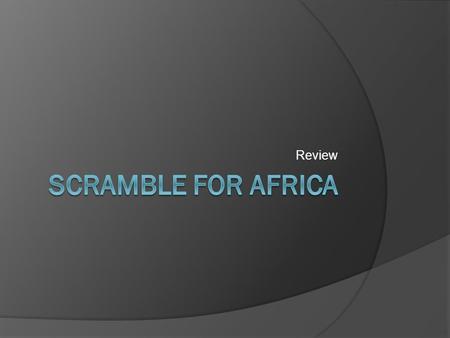 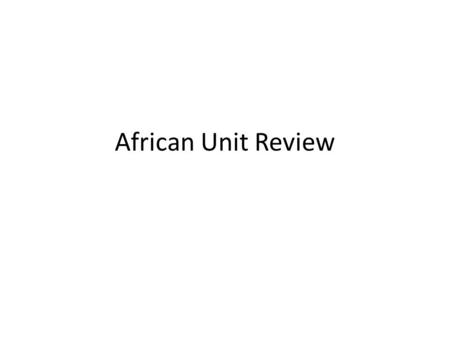