Presentation on theme: "B-6.6: Explain how human activities (including population growth, technology, and consumption of resources) affect the physical and chemical cycles and."— Presentation transcript:

1 B-6.6: Explain how human activities (including population growth, technology, and consumption of resources) affect the physical and chemical cycles and processes of Earth. Human Impact

2 “4 Minutes” by Madonna (with Justin Timberlake)
“There is a sense of urgency… that we are living on borrowed time essentially and people are becoming much more aware of the environment and how we’re destroying the planet.” – Madonna interview with MTV Madonna wrote the song “4 Minutes” because she felt a sense of urgency to save the planet from destruction

3 Activity Working with a partner, your task is to solve some of the world’s toughest problems Each group is only responsible for 2 to 3 issues. You only have 4 minutes to save the world!!!

4 Humans and the Ecosystem
Humans play a role in ecosystem and cycles People depend on resources and cycles of Earth to provide clean water, breathable air, and good soil Human activities are affecting the cycles and Earth processes: Population growth Technology Consumption of resources

7 Population Growth Grown exponentially
Prediction: will continue to grow at a rapid rate Natural slowing of population growth as it nears its carrying capacity is due to increase in death rate and decrease in birth rate due to: Food and water shortages Pollution diseases

8 Population Growth - water
Increasing population affects amount of water produced If clean water is being depleted at a greater rate than it can be purified, it is not considered renewable in our lifetime

9 Population Growth - waste
An increasing population can affect amount of waste There are mechanisms to control the disposal of waste products, but more waste is produced than can be managed Some waste products require complicated and costly means of removal

11 Worldwide, about ½ of the area once covered by forests is now cleared
Compare the before and after for Asia

13 Technology Technology used to find solutions to problems
Technology has been a benefit but also contributed to: pollution of air, water and land For sustainability, technology has provided cleaner energy sources, safer ways to deal with waste and better methods for cleaning up pollution Technological advances in agriculture, industry, and energy can have a positive or negative impact on Earth

22 Consumption of Resources
As population increases and technology expands, demand for earth’s resources increases Limited supply of these resources to sustain population Some resources are renewable resources (production = consumption) Food, clean water, and timber Some factors limit their production Example: grain is limited by amount of land available, fertility, etc.

23 Consumption of Resources
Some resources are nonrenewable resources (consumption > production) Fossil fuels Demand for minerals, metals and ores increases for industry but are decreasing in availability Minerals are nonrenewable resources because mineral deposits can be extracted are formed so slowly Sustainable use of resources can be accomplished by reducing consumption, reusing products rather than disposing of them or recycling waste to protect the environment

Download ppt "B-6.6: Explain how human activities (including population growth, technology, and consumption of resources) affect the physical and chemical cycles and." 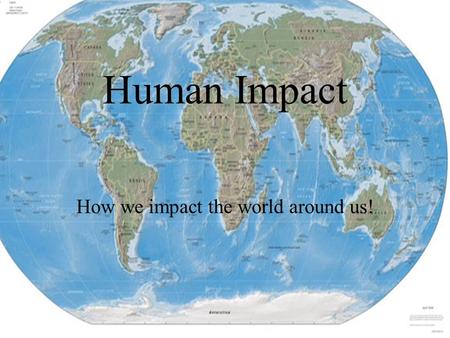 Human Impact How we impact the world around us!. Modern Manhattan on right; virtual recreation of 1609 Mannahatta on left. Image © Markley Boyer / Mannahatta. 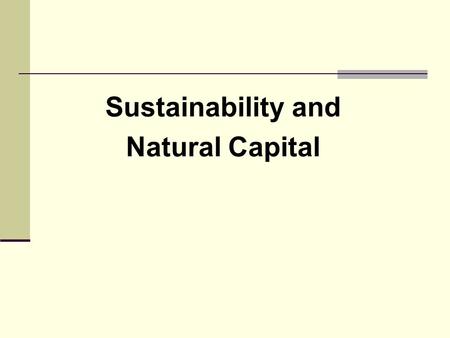