2 Objectives  Each participant will complete a quiz to distinguish between facts and misinformation about HIV and AIDS.  Lecturer will facilitate a discussion of the scientific, medical and social issues relative to HIV/AIDS.

3 Introduction  The global epidemic of HIV/AIDS is rapidly becoming the worst infectious-disease catastrophe in recorded history, surpassing the Bubonic Plague of the 14 th century and the influenza epidemic of 1917, each of which killed 20 million people.  Greater than 20 million people have already died because of AIDS, according to UNAIDS, which coordinates the United Nation’s response to the epidemic.

5 What is AIDS?  AIDS stands for Acquired Immune Deficiency Syndrome.  By name, we can understand a lot about the disease. It is Acquired, meaning that it must be transmitted from an outside source.  It affects the Immune system, and cause a Deficiency. This means that it causes the body’s natural defense to be worn down.  It is a syndrome which simply means that it is a general name for a number of common symptoms. AIDS is not a virus in itself. It is simply a name for the later stages of HIV.

6 Why do people infected with HIV eventually die?  When people are infected with HIV, they do not die of HIV or AIDS. These people die due to the effects that the HIV has on the body. With the immune system down, the body becomes susceptible to many infections, from the common cold to cancer.It is actually those particular infections and the body’s inability to fight the infections that cause these people to become so sick, that they eventually die.

7 How do you become infected with HIV?  By having sexual intercourse with an infected partner.This includes ORAL, ANAL, and VAGINAL. It makes no difference if the person is gay, straight or bisexual. It makes no difference if it is a guy or girl, or what age the person is. In fact the fastest growing segment of our population that is becoming infected with HIV are heterosexuals (straight), and between the ages of 18 and24.  By injecting drugs using a needle or syringe which has already been used by someone who is infected.  HIV can be passed on in both ways because the virus is present in the sexual fluids and blood of infected people. If infected blood or sexual fluid gets into your blood, then you will become infected.  HIV can be found in primarily four bodily fluids. If you can remember the four bodily fluids, you can remember how HIV is transmitted. HIV can be present in blood, vaginal fluids, semen, and breast milk.

8 Transmission Continued  Blood transfusions-Some people have been infected through transfusion of infected people. But in most countries all blood used for transfusions is tested for HIV.In these countries HIV infection via a blood transfusion is now extremely rare.  An infected pregnant woman can pass the virus on to her unborn baby either before or during birth. Approximately 30% of children born to HIV infected mothers get HIV- primarily through the birthing process. HIV can also be passed on during breastfeeding and therefore mothers should not breast feed their children.  Sixty-one percent of 14-21 year olds are engaged intercourse. The problem we are faced with is the spread of this disease among this generation.

9 Transmission Clarification  HIV cannot be transmitted through hugging, kissing, holding hands or sharing food or a drink with someone who is infected.  There is a very low concentration of the virus in tears and saliva.It would take two gallons of saliva at once for anyone to be infected with HIV.  There are no known cases of transmission through mosquitoes or any other animals.

10 Treatment  Scientists are trying to develop a cure for AIDS. There are three parts to finding the cure. They are: –To devise a drug that will kill HIV once it enters the body. –To create a vaccine that would prevent the disease. –To educate people world wide about the dangers of AIDS and how to prevent infection.

11 Prevention  There are a few simple ways to protect yourself and others against HIV.  They include abstinence, using a male or female condom, and never sharing a needle when injecting drugs.

12 How AIDS destroys Globalization.  AIDS is destroying the twin rationales of globalization strategy:cheap labor and fast growing markets.  AIDS has a devastating impact on developing economies, because, unlike other diseases that primarily affect young children and old people, it kills young and middle-aged adults in their most productive years as employees and customers.  The epidemic is reducing the demands for goods and services in developing markets.  Attention must be brought to North America as well as instituting organizational wide prevention programs. 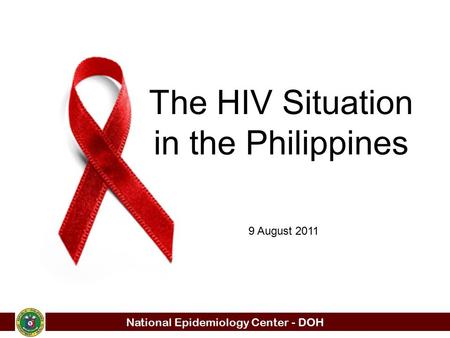 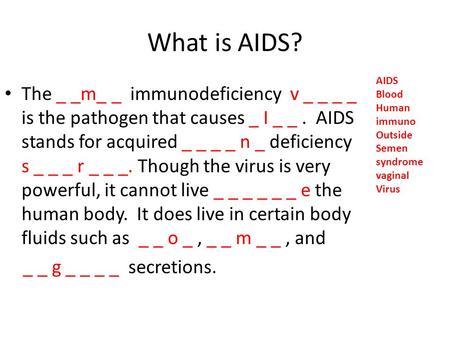 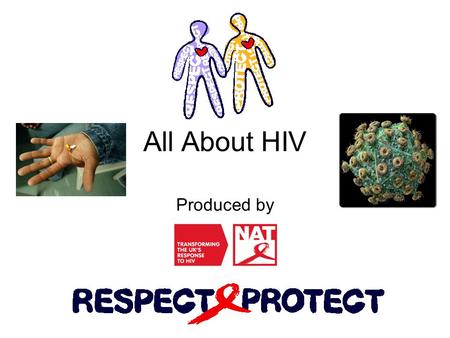