2 Definition of HIV and AIDS.
Human Immunodeficiency Virus – (HIV) the virus that causes AIDS. Acquired Immunodeficiency Syndrome – (AIDS) a deadly disease that interferes with the body’s ability to fight infection.

3 What Is AIDS? Acquired means you can get infected with it.
Immune Deficiency means a weakness in the body's system that fights diseases. Syndrome means a group of health problems that make up a disease

4 Being HIV-positive, or having HIV disease, is not the same as having AIDS. People infected with HIV have the virus for an average of 10 years before showing any symptoms of AIDS. AIDS is the late stage of having the HIV disease

6 Or When a person develops any of the specific, serious conditions – also called AIDS-defining illnesses – that are linked with HIV infection Viruses, parasites, fungi and bacteria that usually don't cause any problems for a healthy person but can make you very sick if your immune system is damaged by HIV. These are called "opportunistic infections."

7 How does HIV weakens the immune system?

9 What Happens if I'm HIV Positive?
You might not know if you get infected by HIV. Some symptoms are: fever, headache, sore muscles and joints, stomach ache, swollen lymph glands, or a skin rash for one or two weeks. Most people think it's the flu. Some people have no symptoms. The virus will multiply in your body for a few weeks or even months before your immune system responds.

10 Carrier – an apparently healthy person who has HIV in the blood and can pass it to others. You can be a carrier of HIV and not have AIDS (HIV positive).

11 During this time, you won't test positive for HIV
When your immune system responds, it starts to make antibodies. When this happens, you will test positive for HIV. You might start having signs of HIV disease like fevers, night sweats, diarrhea, or swollen lymph nodes If you have HIV disease, these problems will last more than a few days, and probably continue for several weeks.

12 How Can You Get HIV? You can get infected with HIV from anyone who's infected, even if they don't look sick and even if they haven't tested HIV-positive yet. HIV can pass through certain body fluids: Blood Vaginal fluid Semen Breast milk

13 Most people get the HIV virus by:
having sex with an infected person. sharing a needle (shooting drugs) with someone who's infected being born when their mother is infected (With no treatment, about 25% of the babies of HIV-infected women would be born infected.), or drinking the breast milk of an infected woman. Getting a transfusion of infected blood used to be a way people got AIDS, but now the blood supply is screened very carefully and the risk is extremely low

14 There are no documented cases of HIV being transmitted by tears or saliva, but it is possible to be infected with HIV through oral sex or in rare cases through deep kissing. Why?

15 To decrease the risk of spreading HIV:
Use condoms during sexual activity; Do not share drug injection equipment If you are HIV-infected and pregnant, talk with your doctor about taking anti-HIV drugs If you are an HIV-infected woman, don't breast feed any baby Protect cuts, open sores, and your eyes and mouth from contact with blood

17 Where did HIV/AIDS come from?
In 1999 scientists were able to trace the virus back to a subspecies of chimpanzees native to west Africa as the original source of the virus. The researchers believe that HIV-1 was introduced into the human population when hunters became exposed to infected blood.

18 How could HIV have crossed species?
It has been known for a long time that certain viruses can pass from animals to humans. Some other rather controversial theories have contended that HIV was transferred through medical experiments.

20 Life expectancy AIDS is different in every infected person. Some people die in a few months after getting infected, while others live fairly normal lives for many years, even after they "officially" have AIDS A few HIV-positive people stay healthy for many years even without taking anti-HIV medications

22 Common myths about how HIV is spread.
through the air; either breathing the same air as an infected person, or from a sneeze or cough closed-mouth kissing through casual contact; hugging or shaking hands

23 Other myths about how HIV is spread:
through mosquitoes sharing eating utensils donating blood

24 EDUCATION is the key to preventing the spread of AIDS. 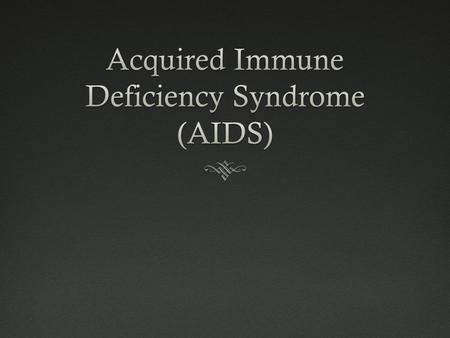