Presentation on theme: "The Giver By: Lois Lowry. Characters Jonas- an eleven year old boy about to be given a very interesting job Jonas’ father-he works at the Nurturing Center."— Presentation transcript:

1 The Giver By: Lois Lowry

3 Setting The community where Jonas lives. Everything is in black and white there, there are no colors. Everyone’s houses are the same, the number of children is the same, everything is the same. Every child goes to school and at the age of age 12 they start training for their job. No one picks their job, it is picked for them.

4 Chapters 1-3 We are introduced to Jonas and his family. They share their feelings every night after dinner. We hear a lot about “releasing” people from the community but no mention of what it means. There are certain rules in the community that must be followed. Jonas is worried about the Ceremony of 12 when the elders pick the future jobs of the children. Jonas’ dad talks about a child he works with and is concerned about. Jonas’ dad brings home a child, Gabriel, from the nurturing center.

5 Chapters 4-8 Every morning the family shares their dreams from the previous night. Jonas is given medicine so he doesn’t get “distracted” by girls. At the ceremony of 12 the elders skip Jonas. Jonas is then told that he will be the next Receiver of Memory, a very important job. Jonas is a little afraid of his new assignment.

6 Chapters 9-13 Jonas reads the list of rules specific to his new “job”. He is surprised by some of the rules. Jonas meets The Giver of Memories and learns what his job will be. The Giver transmits memories to Jonas, some nice and one painful. Jonas is starting to see colors. Jonas learns that he can have a spouse and children but the Giver says it is difficult to have them.

7 Chapters 14-18 The Giver gives Jonas a more painful memory and Jonas experiences pain for the first time. Jonas’ dad has to chose a twin to release. Jonas is given the memory of war. He does not want to go back to see the Giver. The Giver gives Jonas some happier memories. Jonas tries to play with his friends but it is different now, not as fun. Jonas learns what happened to the receiver chosen ten years ago.

Download ppt "The Giver By: Lois Lowry. Characters Jonas- an eleven year old boy about to be given a very interesting job Jonas’ father-he works at the Nurturing Center." 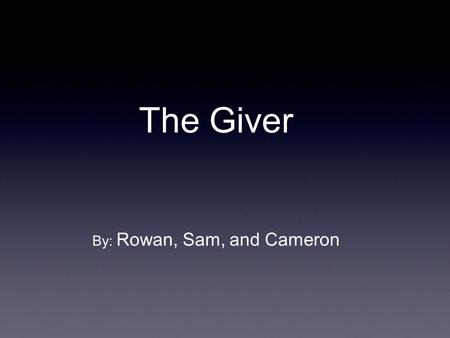