3 The sled, the first memory Jonas receives from the Giver, symbolizes the journey Jonas takes during his training and the discoveries he makes. It is red, a color that symbolizes the new, vital world of feelings and ideas that Jonas discovers. For Jonas, the new child Gabriel is a symbol of hope and of starting over. Jonas takes Gabriel with him to save Gabriel’s life, but his gesture is also symbolic of his resolve to change things, to start a new life elsewhere. The river, which runs into the community and out of it to Elsewhere, symbolizes escape from the confines of the community.

4 For our theme we thought about individuality. We felt this way because during the novel, Jonas developed into an individual, maturing from a child dependent upon his community into a young man with unique abilities, dreams, and desires.

5 The external conflict is how Jonas rebels against the society and decides to leave. When Jonas kidnapped Gabriel and survived the wilderness on his own.

6 Resolution-Readers have to decide whether Jonas and Gabe reach safety Elsewhere or die trying. I believe that Jonas’s resolution was taking Gabriel and escaping. Major conflict- Jonas’s new emotional and sensory awareness cause him to rebel against the restrictions his society places on freedom of choice, individuality, emotion, and human experience.

7 Jonas: Jonas is the pale-eyed Eleven who is chosen to become the next Receiver of Memories in the community. His Assignment is the most honored and respected one, and Jonas has the intelligence, integrity, and courage needed to become a Receiver. The Receiver/ The Giver : As the most venerated and regarded Elder in the community. The Receiver, later called 'The Giver' by Jonas, has similarly pale eyes like those of Jonas and of Gabriel. He is an old, grave man who has been wearied by the burden of carrying alone the sorrow and the pain that memories bring. Mother: Jonas's mother is an eminent official at the Department of Justice before whom offenders of rules are brought to be judged. She is responsible for upholding rules in the community. She works many hours even at home. Father: Jonas's father is a Nurturer at the Nurturing Center who takes care of children who are newly born. Shy and quiet, he has 'a calmer disposition' than that of Jonas's mother, although less intelligence. Lily: Lily is Jonas's talkative little sister who is a Seven. At the December Ceremony, she becomes an Eight who wears a jacket that newly identifies her as an Eight and starts her volunteer activities in the community. Gabriel: Gabriel is a newchild who is one of the fifty being taken care of at the Nurturing Center. Gabriel is placed in the 'extra care section for supplementary nurturing' because he does not grow normally like other children and does not sleep well. Jonas's father brings Gabriel home at nights to spend time with the family. Like Jonas, Gabriel has pale eyes which are rare in the community where most of the citizens have dark eyes. Asher: Asher is Jonas's best friend. He is clumsy, careless, and imprecise with words, but cheerful and good-humored. When he becomes a Twelve, Asher receives the Assignment of Assistant Director of Recreation.

8 Fiona: Fiona is Jonas's other friend. Her Assignment as a Twelve is that of a Caretaker of the Old at the House of the Old. Fiona is 'a sensitive, gentle girl' whom Jonas likes. Rosemary: Rosemary was a girl Eleven who had been chosen to succeed The Giver as the next Receiver of Memories ten years ago. Although her training had begun well, it had eventually failed. She could not bear the pain and the sorrow of many of the memories that were being given to her. After training one day, she went to the Chief Elder to apply for a release from the community. When Rosemary was released, the memories she had been given came back to the community and to the people because memories are forever. Benjamin: Benjamin is the Eleven who has spent most of his volunteer hours at the Rehabilitation Center where injured people are treated. Larissa: Larissa is the old woman at the House of the Old whom Jonas helps bathe during his last volunteer hours. During her bath, Larissa tells Jonas about a Ceremony of Release they had for a man named Roberto earlier that day and another recent release for a woman named Edna. Roberto: Roberto is an elderly man at the House of the Old whom Jonas had once helped feed. Edna: Edna is another elderly woman whom Larissa talks about. She had been a Birthmother, then a Laborer in Food Production. She hadn't even had a family. Caleb: Caleb had been a cheerful child-a Four who was lost in the river. During the December Ceremony, a newchild is named Caleb in order to replace the Caleb who had been lost earlier.

9 Fritz: Fritz is an awkward, clumsy boy in the community. When he receives his bicycle as a Nine, Fritz immediately bumps into the podium. He is known for his minor careless mistakes, 'but each such error [reflects] negatively on his parents' guidance and [infringes] on the community's sense of order and success.' Chief Elder: The Chief Elder is the leader of the community who is newly elected every ten years. At the December Ceremony, the Chief Elde makes speeches and gives out Assignments to the Elevens. Committee of Elders : The Committee of Elders is a group of Elders in the community whose long robes distinguish them from the rest of the citizens. The Elders make important decisions about matters concerning the community. They observe children during school hours as well as during recreation and volunteer hours in order to give them their appropriate Assignments. The Elders also observe citizens to match them with appropriate spouses and assign them to children. Pierre: Pierre is a fellow Eleven whose number is Twenty. Jonas does not like Pierre very much because he is 'very serious, not much fun, and a worrier and tattletale.' He is always worried about abiding by the mos Issac: Issac, Three, is given an Assignment as Instructor of Sixes. Katherine : Katharine is a Six who has pale eyes like those of Jonas. Like The Giver and Jonas who both have pale eyes, it is expected that she will also be selected to become a Receiver in the future. t trivial rules in the community. Madeline: Madeline is a female Eleven who is Number One. As the first born new child during her year, Madeline is given her Assignment first as a Fish Hatchery Attendant. Inger : Inger is a female Eleven who is Number Two. She is assigned as a Birthmother. Jonas thinks that this is an appropriate Assignment for Inger who is 'nice,' but 'lazy'

10 I learned something after reading Lois Lowry’s The Giver. I learned that I shouldn’t take my family, friends and freedom for granted. One day something terrible could go wrong, and I could lose all of them. I shouldn’t take my freedom for granted because in some places, it really is like Jonas’s community. I should be happy that I can express myself and be my own unique individual, and I think this book strongly encourages that. 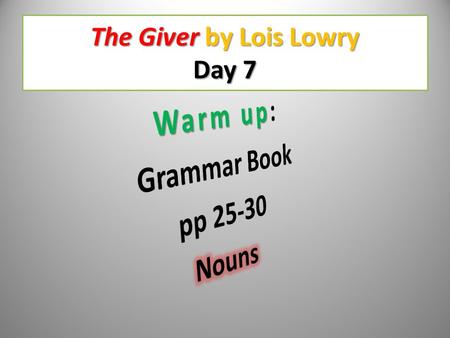