1 Grade 8 Science Unit 2: Optics
Chapter 4: Many properties of light can be understood using a wave model of light.

3 The History of Light Pythagoras A Greek philosopher
Believed that beams of light were made of tiny particles. The eyes detected these particles and could see the object.

11 Light Light: a form of energy that can be detected by the human eye. Visible light: a mixture of all the colors of the rainbow.

17 5. Light travels through a vacuum (does not require a medium; no particles involved)

18 6. Travels through objects to different degrees

19 Visible Light Spectrum
Can be seen due to the dispersion of light through a prism.

21 When a laser is shone through a prism, the light will refract but disperse.
Why? A laser light is one color only!

24 Frequency: the number of repetitive motions that occur during a given time.
Ex. The number of wavelengths that pass a point in 1 second. Measured in Hertz

25 Amplitude: the height of a wave crest or depth of a wave trough as measured from the rest position.
crest height = trough depth The larger the amplitude, the greater the energy transported.

29 Electromagnetic Radiation
The transmission of energy in the form of waves that extend from the longest radio waves to the shortest gamma rays.

31 Types of Electromagnetic Radiation
1. Radio waves: the longest wavelength and lowest energy and frequency. Can be used to help us see the inside of our bodies to diagnose illness. Ex. MRI

34 How a Microwave Works Microwave ovens use a specific frequency that is strongly absorbed by water molecules in food.

37 4. Visible Light Spectrum
Can be continually detected by our eyes.

40 6. X-Rays: have a shorter wavelength, and higher energy and frequency than UV.
Used to photograph teeth, bones and the inside of machines, security screening

42 7. Gamma Rays: have the highest energy and frequency and the shortest wavelength.
Result from nuclear reactions. Produced by the hottest regions of the universe. 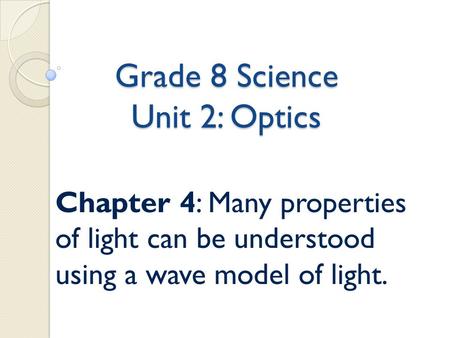 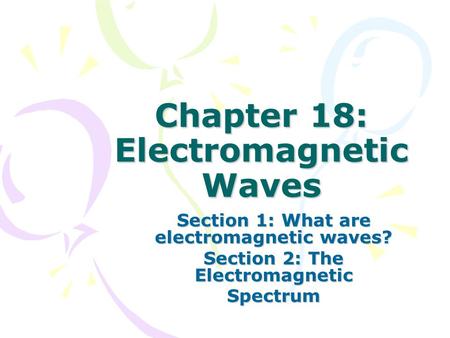