3 Parts of the Grain Kernel

4 Whole grain foods Contain all three parts of the kernel.
Examples are whole-wheat flour, bulgur, oatmeal, whole cornmeal, and brown rice. Made from whole wheat that has been soaked and baked to speed up cooking time. Especially popular in the Middle East.

5 Enriched Some of the nutrients lost during processing when the bran and germ were removed are added back to them. Enriched foods have thiamin, riboflavin, niacin, folic acid, and iron added.

6 Leavening Agents Ingredient added to baked goods that produces gas bubbles, which cause the baked goods to rise. Leavening agents produce a gas called carbon dioxide which causes the bread to rise during baking.

10 CULTURES OF THE WORLD India is a large country on
the north coast of the Indian Ocean. Its landscape includes rugged mountains, deserts, and rainforests. Farming is very important in India. Three out of four people work to grow crops.

11 Chapatis Chapatis (cha-PAH-tees) are the best known bread from India.
Chapatis are an unleavened bread baked on the cooktop. Many rural families grind their wheat to make chapatis every day

16 Ready-to-Eat Breads To preserve the quality of breads, store in a tightly closed container in a cool, dry place. Will stay fresh for about one week. Wrapped tightly, they will stay fresh in the freezer for two to four months.

17 Gluten A sticky elastic protein that forms when flour is mixed with liquid. Under a microscope, gluten looks like threads.

19 Flour Flour gives bread its structure. The structure is created by gluten.

21 Eggs Eggs add color and flavor to breads.
Egg yolks are an emulsifier,so they help blend the ingredients. Eggs also help bread to rise. When eggs are beaten, they form many tiny air bubbles, which expand during cooking making the bread rise.

23 Fat Fat adds flavor to bread.
It helps to make the bread tender by keeping the gluten threads from becoming too long.

24 Leavening Agents Leavening agents produce the gas bubbles that cause bread and other baked goods to expand and rise. The three leavening gases are air, steam, and carbon dioxide.

25 Batters A mixture consisting of flour and liquid that can be poured or dropped from a spoon. Pancakes and muffins are examples.

26 Doughs A mixture consisting of flour and liquid that is thick and stiff enough to be handled or kneaded. Biscuits, rolls and pizza crusts are examples. 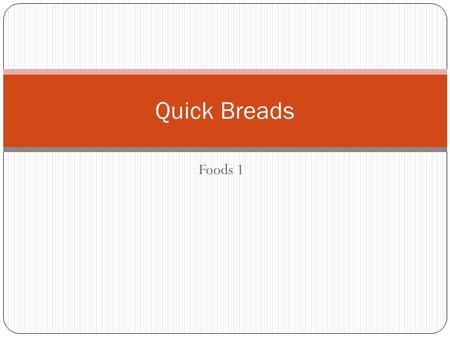 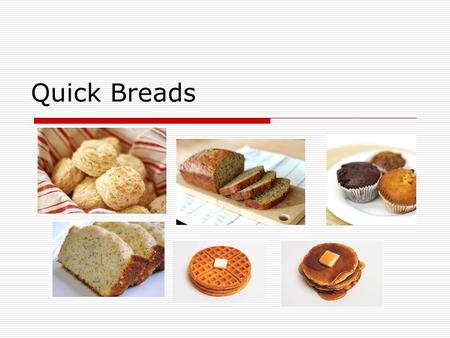 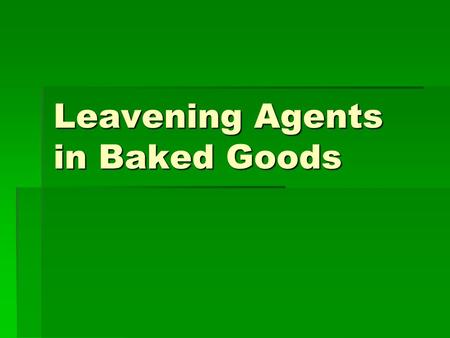 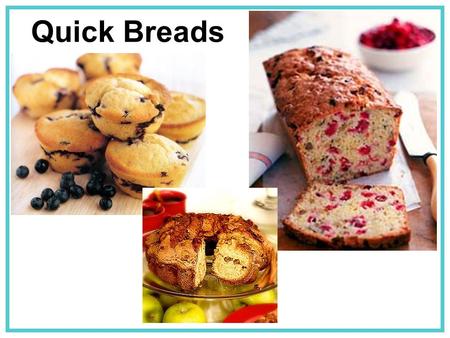 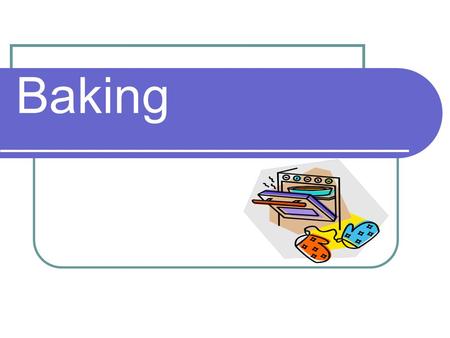 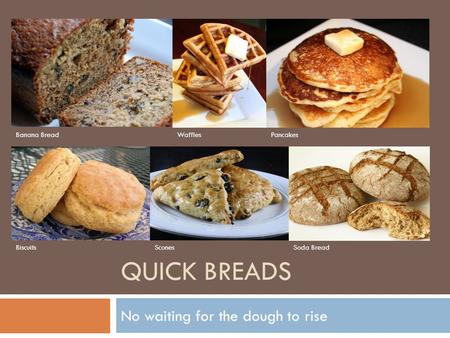 QUICK BREADS No waiting for the dough to rise Banana BreadWafflesPancakes BiscuitsSconesSoda Bread. 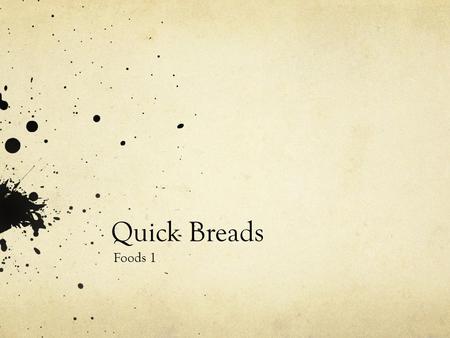 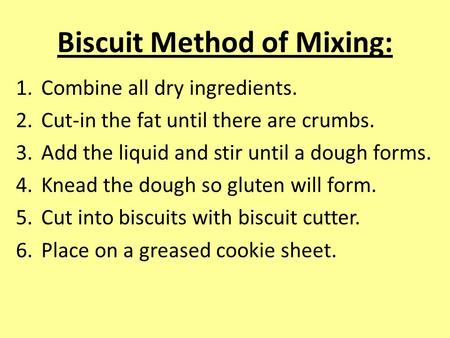 Biscuit Method of Mixing: 1.Combine all dry ingredients. 2.Cut-in the fat until there are crumbs. 3.Add the liquid and stir until a dough forms. 4.Knead. 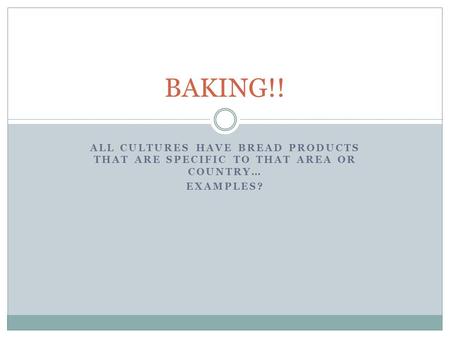 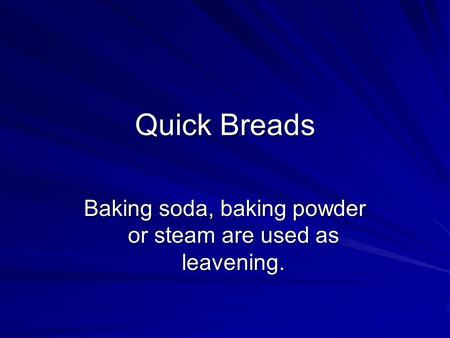 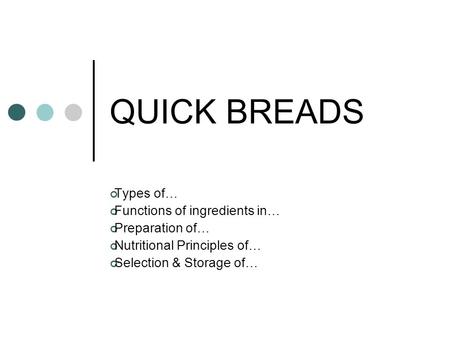 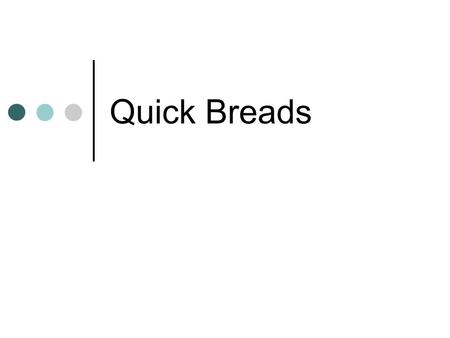 Quick Breads What are quick breads? Quick breads are food products which contain the same basic ingredients The proportion of the ingredients and the. 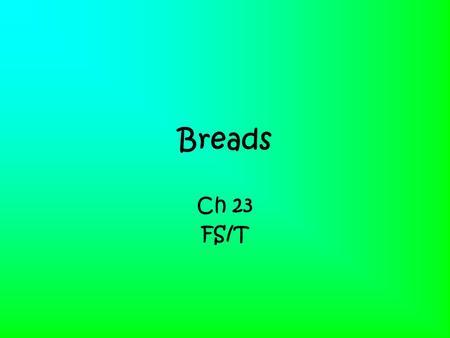 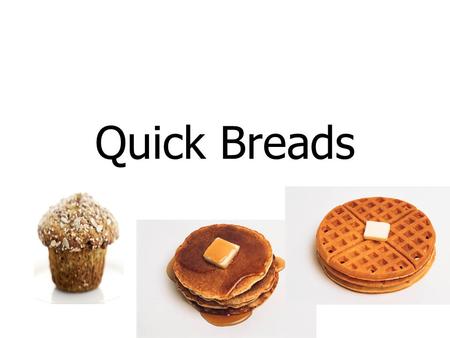 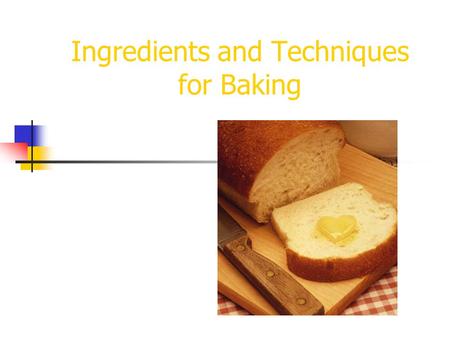 Ingredients and Techniques for Baking 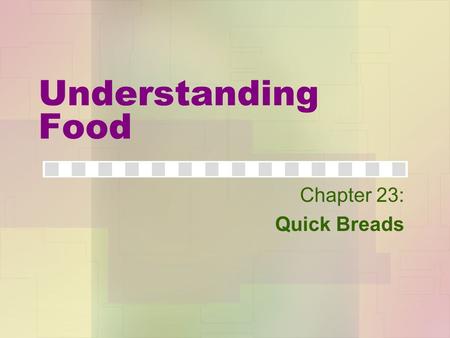