8 Importance of Convection Cells 3 cells in each hemisphere

11 Global Winds and Weather Each hemisphere contains three convection cells Each convection cell correlates to an area of Earth’s surface, called a wind belt –characterized by winds flowing in one direction – prevailing winds Winds are named by where they come from

17 The Doldrums and Horse Latitudes The trade wind systems of the Northern Hemisphere and Southern Hemisphere meet at the equator in a narrow zone called the doldrums As the air approaches 30º latitude, it descends and a high-pressure zone forms. These subtropical high-pressure zones are called horse latitudes surface winds are weak and variable in both of these zones.

18 Wind and Pressure Shifts As the sun’s rays shift northward and southward during the changing seasons of the year, the positions of the pressure belts and wind belts shift Although the area that receives direct sunlight can shift by up to 46 º north and south of the equator, the average shift for the pressure belts and wind belts is only about 10º of latitude However, even this small change causes some areas of Earth’s surface to be in different wind belts during different times of the year

20 Local Winds Movement of air are also influenced by local conditions, and local temperature variations commonly cause local winds Local winds are not part of the global wind belts. Gentle winds that extend over distances of less than 100 km are called a breeze.

21 Land and Sea Breezes Equal areas of land and water may receive the same amount of energy from the sun. However, land surfaces heat up faster than water surfaces do. The cool wind moving from water to land is called a sea breeze Overnight, the land cools more rapidly than water does, and the sea breeze is replaced by a land breeze

22 Mountain and Valley Breezes A valley breeze forms when warm air from the valleys moves upslope At night, the mountains cool more quickly than the valleys do. At that time, cool air descends from the mountain peaks to create a mountain breeze Areas near mountains may experience a warm afternoon that turns to a cold evening soon after sunset

23 Coriolis Effect Coriolis effect - curving of the path of a moving object from an otherwise straight path due to Earth’s rotation Detectable only on objects that move very fast or that travel over long distances –Oceans, Atmosphere, planes 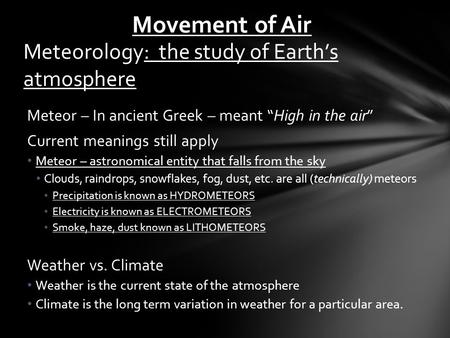