Presentation on theme: "Cycles of Matter. Recycling in the Biosphere Energy and matter move through the biosphere very differently. Unlike the one-way flow of energy, matter."— Presentation transcript:

2 Recycling in the Biosphere Energy and matter move through the biosphere very differently. Unlike the one-way flow of energy, matter is recycled within and between ecosystems.

3 Recycling in the Biosphere Elements, chemical compounds, and other forms of matter are passed from one organism to another and from one part of the biosphere to another through biogeochemical cycles.  Matter can cycle because biological systems do not use up matter, they transform it.  Matter is assembled into living tissue or passed out of the body as waste products.

5 Nutrient Cycles All the chemical substances that an organism needs to sustain life are its nutrients.  Every living organism needs nutrients to build tissues and carry out essential life functions.  Similar to water, nutrients are passed between organisms and the environment through biogeochemical cycles.

8 The Carbon Cycle Biogeochemical processes, such as the burial and decomposition of dead organisms and their conversion under pressure into coal and petroleum (fossil fuels), store carbon underground. Human activities, such as mining, cutting and burning forests, and burning fossil fuels, release carbon dioxide into the atmosphere.

10 The Nitrogen Cycle All organisms require nitrogen to make proteins. Although nitrogen gas (N 2 ) is the most abundant form of nitrogen on Earth, only certain types of bacteria can use this form directly. Such bacteria live in the soil and on the roots of plants called legumes. They convert nitrogen gas into ammonia in a process known as nitrogen fixation.

11 The Nitrogen Cycle Other bacteria in the soil convert ammonia into nitrates and nitrites. Once these products are available, producers can use them to make proteins. Consumers then eat the producers and reuse the nitrogen to make their own proteins.

12 The Nitrogen Cycle When organisms die, decomposers return nitrogen to the soil as ammonia.  The ammonia may be taken up again by producers. Other soil bacteria convert nitrates into nitrogen gas in a process called denitrification.  This process releases nitrogen into the atmosphere once again.

15 The Phosphorus Cycle Phosphate, eventually enters the ocean, where it is used by marine organisms. Some phosphate stays on land and cycles between organisms and the soil. Plants bind the phosphates into organic compounds.

16 Organic phosphate moves through the food web and to the rest of the ecosystem. Ocean Land Organisms Sediments

18 Nutrient Limitation If a nutrient is in short supply, it will limit an organism's growth. When an ecosystem is limited by a single nutrient that is scarce or cycles very slowly, this substance is called a limiting nutrient.

19 Excess Nutrients…. When an aquatic ecosystem receives a large input of a limiting nutrient (especially phosphorus)—such as runoff from heavily fertilized fields—the result is often an immediate increase in the amount of algae and other producers.  This result is called an algal bloom. Algal blooms can disrupt the equilibrium of an ecosystem.

21 Section Review 2. Carbon is found in the atmosphere in the form of a. carbohydrates. b. carbon dioxide. c. calcium carbonate. d. ammonia.

22 Section Review 3. Biologists describe nutrients as moving through cycles because the substances a. start as simple organic forms that plants need. b. provide “building blocks” and energy that organisms need. c. are passed between organisms and the environment and then back to organisms. d. are needed by organisms to carry out life processes.

23 Section Review 4. The only organisms that can convert nitrogen in the atmosphere into a form useful to living things are nitrogen- fixing a. plants. b. bacteria. c. detritivores. d. animals.

24 Section Review 5. When an aquatic ecosystem receives a large input of a limiting nutrient, the result is a. runoff. b. algal death. c. algal bloom. d. less primary productivity.

Download ppt "Cycles of Matter. Recycling in the Biosphere Energy and matter move through the biosphere very differently. Unlike the one-way flow of energy, matter." 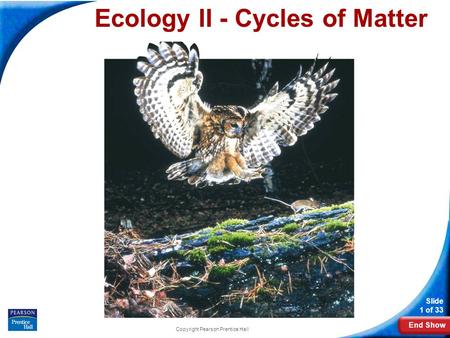 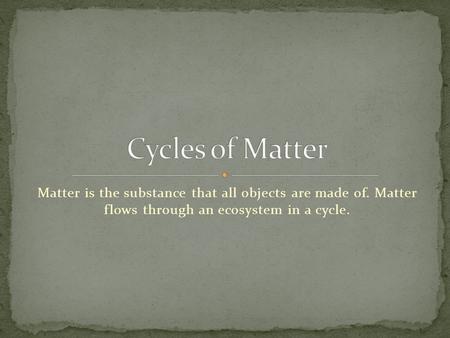 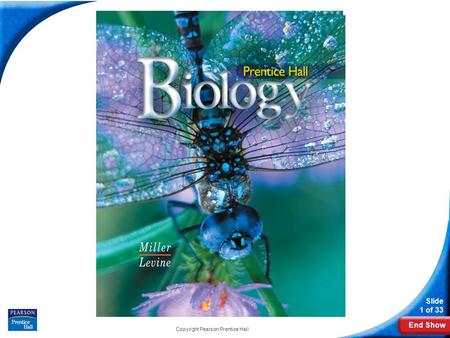 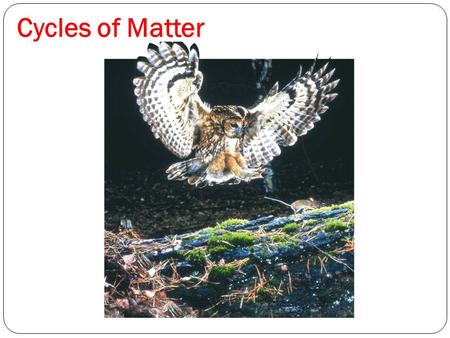