SECURITY IN NATIONAL NUCLEAR DEVELOPMENT S.M. Anwaruddin Beloit College, Beloit, WI 53511 Abstract One of the most complicated issues in the current international.

1 SECURITY IN NATIONAL NUCLEAR DEVELOPMENT S.M. Anwaruddin Beloit College, Beloit, WI 53511 Abstract One of the most complicated issues in the current international system is to determine who should have nuclear weapons and who should not. The countries that have nuclear weapons argue that not every state has right to have nuclear weapons, as some sates are not responsible enough to handle them. This argument has been rejected by those who want to have nuclear weapons for their own interests, e.g. national security. Recently, the relationship between the U.S. and Iran has become very hostile because of this nuclear debate. Therefore, to protect their interests, both parties should negotiate a practical approach to solving this problem. Introduction Although physicists knew the basic structure of atom in the late 1800s, they discovered the possibility of using nuclear energy for military purposes in 1930s. In 1939, President Franklin Roosevelt received a letter from Albert Einstein who warned the president about a possible nuclear threat. Realizing the potential threat, the U.S. government set up the Manhattan Project for inventing atomic bomb. The scientists of this project “detonated the world’s first nuclear device at the trinity test site near Alamogorda, New Mexico. Three weeks later, Little Boy was dropped on Hiroshima.”[1] The effects of nuclear weapons include immediate ones, e.g. death under collapsed buildings; effects on social, economic, and political organizations, e.g. food shortage, destroyed cities without electricity, water supply, and transportation; and the long-term consequences like nuclear winter.[2] To deter others from threatening them, many states are trying to increase their nuclear power. There was a great tension between the U.S. and Soviet Union during the World War II which continued until the end of the Cold War. Realizing the deadly consequences of nuclear weapons, the United Nations established the International Atomic Energy Agency to ensure “secure and peaceful uses of nuclear science and technology.”[3] The Treaty on the Non-Proliferation of Nuclear Weapons (NPT) plays an important role “to prevent the spread of nuclear weapons and weapons technology, to promote co-operation in the peaceful uses of nuclear energy and to further the goal of achieving nuclear disarmament and general and complete disarmament.”[4] Despite these treaties, countries like India and Pakistan have developed nuclear weapons, Israel may have, and North Korea claims it has. Most recently, the nuclear situation has worsened when Iran refused to let international inspectors in. As a result, Iran’s relationship with the West, especially with the U.S., is getting worse. Currently the situation of nuclear debate seems to be more complicated and eventually it might bring disastrous consequences like a nuclear war. Therefore, establishing a successful basis for peaceful negotiation between the U.S. and Iran is the goal of this poster. Objective Criteria According to the UN Security Council, how likely is a U.S. invasion or the use of atomic bomb by Iran? How much nuclear electricity is available to Iran? What is each government saying publicly about the other? Options The USA could offer Iran economic interests as a compensation for which Iran will quit nuclear program; Iran could let the international inspectors in to gain international support; If both Iran and the U.S. fail to reach a consensus, they could invite a third party as a mediator, and the United Nations can play significant roles in this respect; Through a consensus with the UN and IAEA, Iran could get permission for a limited nuclear program which will not pose threat to others; If all the abovementioned steps fail, the case should be sent to the UN Security Council for resolution. If all negotiations fail, Iran could develop nuclear bombs and/or the U.S. could attack Iran. Interests Both Iran and the U.S. want to protect national security; Iran fears foreign occupation in its neighboring countries; Iran wants weapons because Israel has them; Iran wants nuclear weapons for national pride. Both countries consider each other as enemy; The U.S. does not trust the Iranian leadership, and thinks it is not capable of handling nuclear weapons; The U.S. believes Iran posed threats to its neighbors since the Revolution in 1979; The U.S. wants to protect Treaty on the Non- Proliferation of Nuclear Weapons (NPT). References 1. “The Atomic Age: From fission to fallout.” CNN Website. 12 February 2006< http://www.cnn.com/ SPECIALS/cold.war/experience/the.bomb/history.science/>. 2. David P. Barash & Charles P. Webel: Peace and Conflict Studies. London: Sage Publications, 2002. 3. "Pillars of Nuclear Cooperation." International Atomic Energy Agency Website. 12 February 2006< http: //www.iaea.org/OurWork/index.html>. 4. UN Department for Disarmament Affairs website. 12 February 2006< http://www.un.org/Depts /dda /WMD/treaty/>. Negotiators: The United States of America Iran Mediator: The United Nations 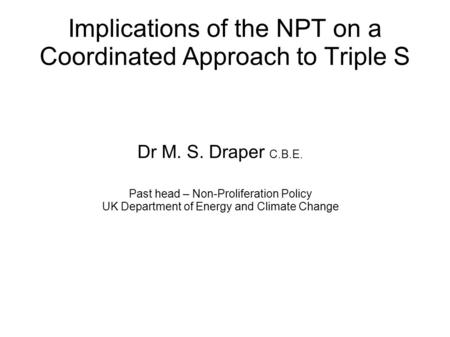 Implications of the NPT on a Coordinated Approach to Triple S Dr M. S. Draper C.B.E. Past head – Non-Proliferation Policy UK Department of Energy and Climate. 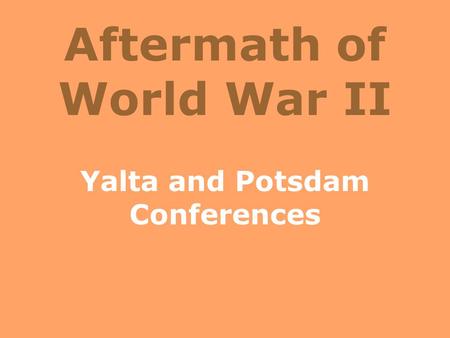 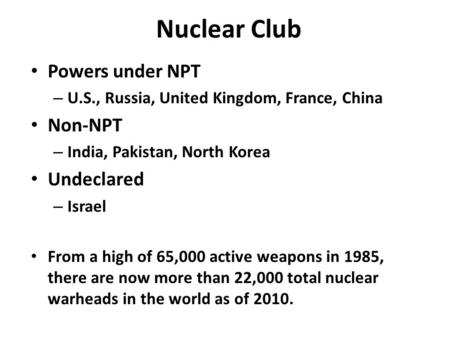 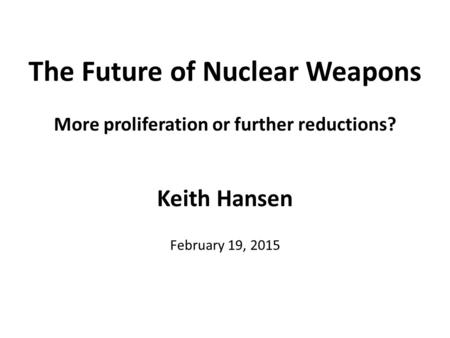 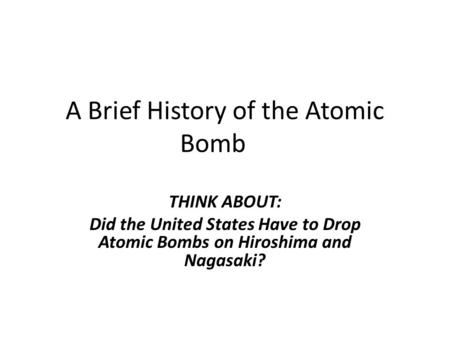 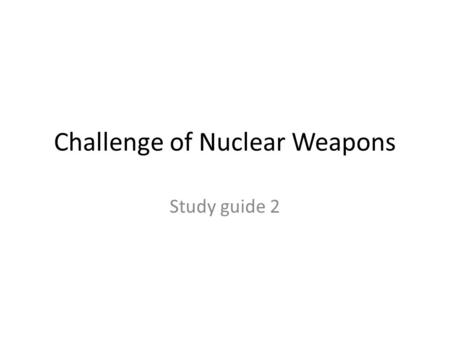 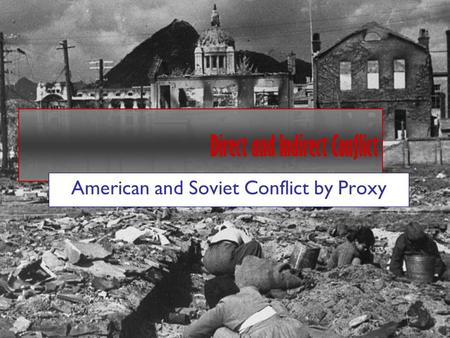 Direct and Indirect Conflict American and Soviet Conflict by Proxy. 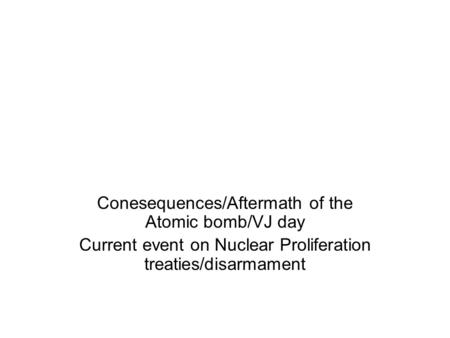 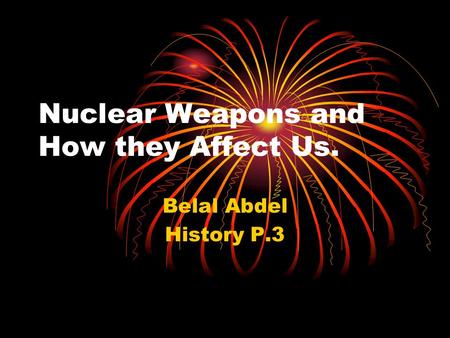 Nuclear Weapons and How they Affect Us. Belal Abdel History P.3. 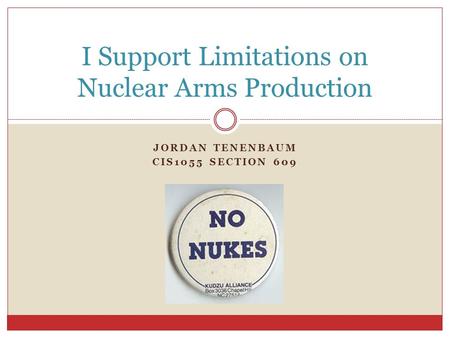 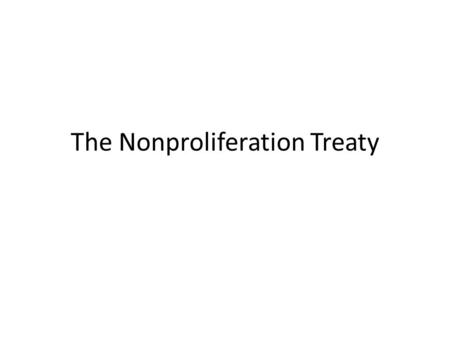 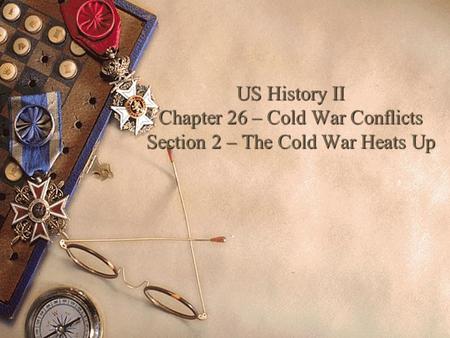 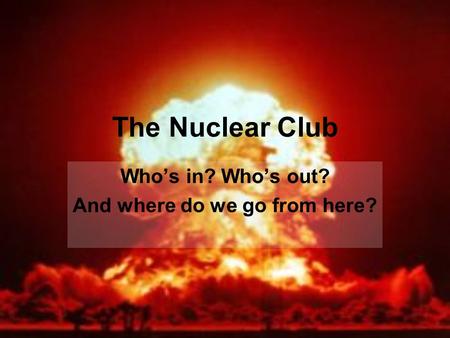 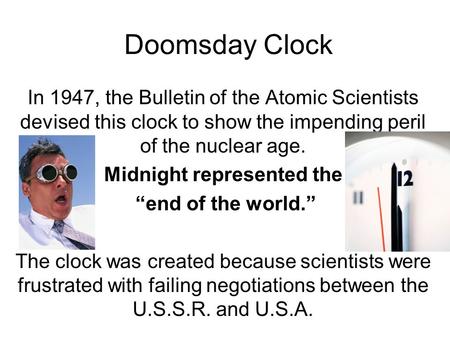 Doomsday Clock In 1947, the Bulletin of the Atomic Scientists devised this clock to show the impending peril of the nuclear age. Midnight represented the. 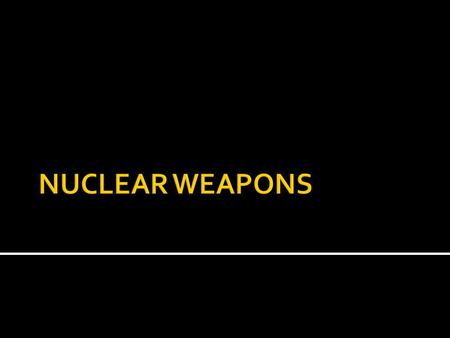 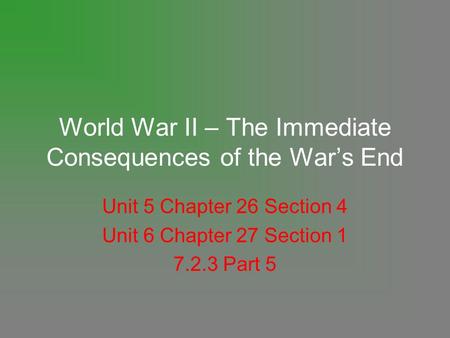 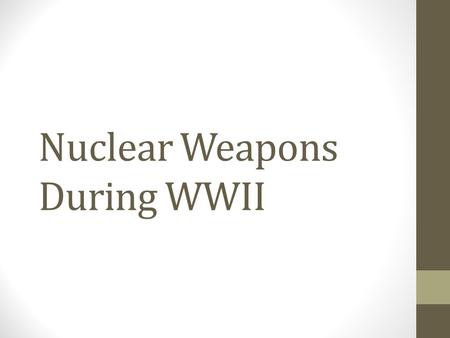 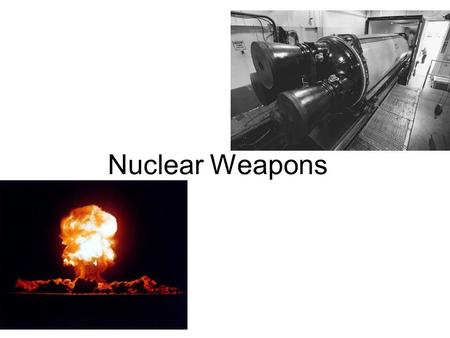