2 Take out a scrap sheet of paper!

5 » Nellie Harper Lee was born on April 28, 1926 in Monroeville, AL. » She was the youngest of four children. » She attended Huntingdon College, and then earned a degree in law from the University of Alabama in 1949.

6 » Harper Lee also spent a year studying at Oxford University in England. » She worked as a clerk with an airline company in New York City, but later quit to focus her efforts on writing. » She first submitted a manuscript of To Kill a Mockingbird in 1957, but was asked to rewrite the story – it was too incoherent.

7 » In 1960, To Kill a Mockingbird was published. » It is Lee’s only published novel, though it has won much critical acclaim. » Lee was named by President Johnson to the National Council of Arts in 1966, and also received many honorary doctoral degrees from various universities. » Lee also won the Pulitzer Prize for Fiction in 1961.

9 » To Kill a Mockingbird has been challenged in many school systems and banned in some. » In 1977, the novel was banned from some schools due to the words “damn” and “whore lady” being used. » In 1980, New York schools banned the novel due to it being a “filthy, trashy novel.”

10 » Harper Lee is a descendent of the famous Confederate war general Robert E. Lee. » She was also good friends with fellow author Truman Capote, who wrote In Cold Blood with the assistance of Lee. He actually dedicated the novel to her as well as his friend Jack Dunphy. » Lee based the character “Dill” on Truman.

11 » To Kill a Mockingbird is set in the fictional city of Macomb, Alabama in the 1930s, when segregation and discrimination were at a peak. » Atticus Finch, an attorney, and his two children, Jean “Scout” (his daughter) and Jeremy “Jem” (his son) are the primary characters of the novel.

13 » To Kill a Mockingbird is a bildungsroman. » A bildungsroman is a “coming-of-age” novel, where we see characters developing and coming to grips with reality. » It is also a social novel.

14 » To Kill a Mockingbird is told from the perspective of “Scout,” daughter of Atticus Finch. It is in first-person and is reflective. » The story is set in the fictional city of Maycomb, Alabama during the Great Depression. » There are undertones of racism and prejudice throughout the story, as the Civil Rights Movement is being initiated throughout the States.

15 To Kill a Mockingbird

16 » Jean Louise “Scout” Finch is the daughter of attorney Atticus Finch. » She is Jem’s sister, the niece of Alexandra and Jack, and best friends with Dill. » Scout is the narrator of the story. » She is six years old at the beginning of the story. » She is very intelligent and loves reading, but she is also headstrong, outspoken, and a bit of a tomboy.

17 » Jeremy Atticus “Jem” Finch is Scout’s older brother and son of Atticus Finch. » Jem is four years older than his sister Scout, and therefore has a different perspective on the events of Maycomb in comparison to her. » Jem is intelligent and adventurous, and like his father, stands for justice and morality.

18 » Atticus Finch is Scout and Jem’s father, and brother to Alexandra and Jack. » He is a distinguished lawyer in Maycomb who believes in moral integrity and stands up against the inherent racism of the city. » He is asked to defend Tom Robinson, a black man who has been accused of raping the daughter of Bob Ewell. » Atticus tries to teach his children that all people have a right to human dignity and respect.

19 » Arthur “Boo” Radley is a man who never sets foot from his house. » Because of this, he becomes a person of fascination and terror many Maycomb residents. » Rumors are spread about Boo, saying that he stabbed his father, eats cats, and haunts the neighborhood at night. » In reality, he is much different from the rumors.

20 » Calpurnia is the black cook that works for the Finches. » She helped to raise Scout and Jem, and is respected as a member of the Finch family. » She is strict but loving, and because of this, Scout often resents her many rules and restrictions. » She is kind, intelligent, and strong.

21 » Charles Baker “Dill” Harris is Jem and Scout’s friend who visits Maycomb each summer from his home in Meridian, Alabama. » Dill is very imaginative and sensitive, skill which he often uses to hide his loneliness and pain. » Dill is obsessed with Boo Radley.

22 » Miss Maudie Atkinson is a widowed neighbor of the Finches and a childhood friend of Atticus, Alexandra, and Jack. » Aunt Alexandra is Atticus and Jack’s sister and Scout and Jem’s aunt. She believes that social class and gender roles are important. » Tom Robinson is a black man accused of raping the daughter of Bob Ewell. He is a family man, father, and churchgoer.

23 » Bob Ewell is Mayella’s father and the patriarch of the Ewell family who live in an old cabin near the town dump. He is an awful man who spends his money on alcohol while his children go hungry. » Mayella Ewell is Bob Ewell’s daughter and oldest child. She is lonely and has no friends, and is the only woman in her family. She accuses Tom Robinson of raping her.

24 » Uncle Jack is Atticus and Alexandra’s younger brother and Scout and Jem’s uncle. » Mrs. Henry Lafayette Dubose is an old woman and neighbor of the Finches. She is an old, bitter, racist woman, but not without a good side. » Nathan Radley is Boo Radley’s older brother. He runs the Radley household and is very religious.

25 » Heck Tate is the sheriff of Maycomb. » Link Deas is the employer of Tom Robinson. » Mr. Underwood is the writer, editor, and publisher of Maycomb’s newspaper. » Mr. Dolphus Raymond is a wealthy white man who lives outside town with a black mistress and interracial children. » Mr. Cunningham is one of the poor Cunningham farmers and father of Walter.

28 » Lula is a member of the congregation at Calpurnia’s church. » Burris Ewell is one of Bob Ewell’s sons. » Simon Finch is the first member of the Finch family to come to America.

29 » The following are themes that we will discuss throughout the reading of To Kill a Mockingbird: ˃Social Justice and Human Dignity ˃Prejudice and Racism ˃Growing Up and the Coming of Age (Bildungsroman) ˃Courage in the Face of Adversity ˃Life in the South (Pre-Civil Rights Movement)

30 So what does a mockingbird have to do with this story? 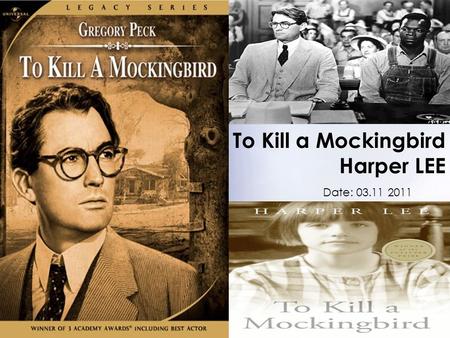 To Kill a Mockingbird Harper LEE 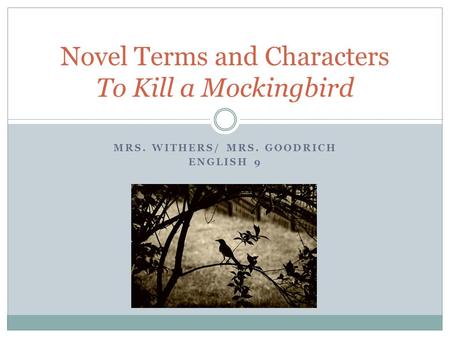