Harper Lee The master behind the masterpiece. Who is she? Born: April 28, 1926. Birthplace: Monroeville, Alabama Youngest of four children Her father.

Presentation on theme: "Harper Lee The master behind the masterpiece. Who is she? Born: April 28, 1926. Birthplace: Monroeville, Alabama Youngest of four children Her father."— Presentation transcript:

1 Harper Lee The master behind the masterpiece

2 Who is she? Born: April 28, 1926. Birthplace: Monroeville, Alabama Youngest of four children Her father was a lawyer Nelle Harper Lee was a tomboy as a child

3 Nelle Harper Lee Childhood friend of writer Truman Capote A young precocious reader, Lee was only five years old when the tragic Scottsboro Trials took place.Scottsboro Trials To Kill a Mockingbird is the only novel Lee ever wrote.

4 Scottsboro Boys Occurred in 1931 in Scottsboro, Alabama Nine (9) Black boys were accused of a gang rape on two white homeless women while riding a freight train from Chattanooga to Huntsville. The trial went to the Supreme Court twice. Eight of the men were convicted (found guilty) and sentenced to death for the rape.

6 Harper Lee Continued… Studied law at the University of Alabama Spent a year at Oxford University Did not pursue a legal career—moved to New York where she worked for an airline and spent the remainder of her time writing Mockingbird. 1960 To Kill A Mockingbird emerged

7 First time is a charm Published in 1960, To Kill a Mockingbird won the heralded Pulitzer Prize. In 1999 the novel was voted “Best Novel of the Century” by the Library Journal

8 Background on Novel To Kill A Mockingbird emerged in 1960. What was happening in the United States during this time period? What about in Alabama? What do you consider to be the author’s purpose? Art imitates life

13 Characters Scout Finch (Jean Louise Finch) The narrator and main character. It could be argued that she is Harper Lee as a child. Jem Finch (Jeremy Finch) Scout’s older brother, Jem is often protective and competitive with Scout.

14 Characters Boo Radley (Arthur Radley) The neighborhood “freak.” He lives close to the Finches. He is the town recluse/hermit. Arthur Radley Boo’s father, Arthur identifies the paranoia of a man raising a troubled young man during such a turbulent time.

15 Characters Charles Baker “Dill” Harris Dill is a friend who visits during the summers. He is a little older than Scout and is friends with both Jem and Scout. Often thought to be a representation of Lee’s childhood friend and author, Truman Capote. Calpurnia Mother/Grandmother figure who serves as a household helper to the Finches.

16 Characters Atticus Finch Scout and Jem’s father, Atticus is the voice of morality, reason, wisdom, and justice in this story. Widower – Jem & Scout’s mother (his wife) passed when they were little. One of the great characters in any novel, Atticus is a hero to many for his upstanding character and undying integrity.

17 Characters Tom Robinson Tom is a black man accused of raping a white woman (Mayella Ewell) in Maycomb, AL. Tom’s character helps relate and serves as a representative of the injustices of racial prejudice in the depression soaked South.

18 Characters Mayella Ewell The 19 year old girl who Tom is accused of raping, Mayella Ewell’s personal integrity is questioned throughout the story. Bob Ewell Mayella’s father, this alcoholic dominant male character provides insight into the downfall of poor people during the depression.

Download ppt "Harper Lee The master behind the masterpiece. Who is she? Born: April 28, 1926. Birthplace: Monroeville, Alabama Youngest of four children Her father." 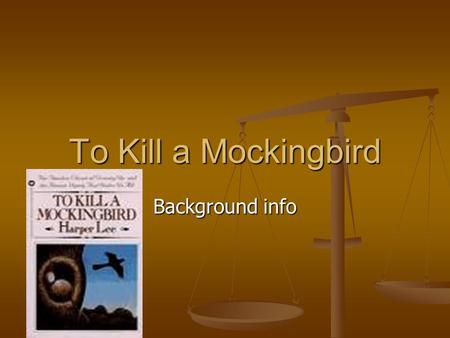 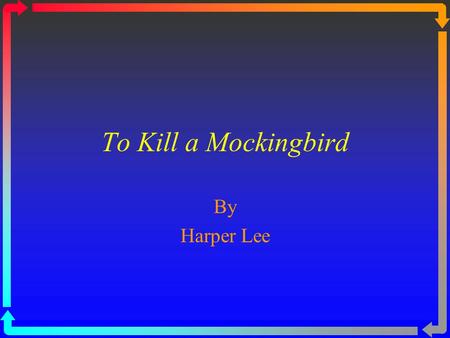 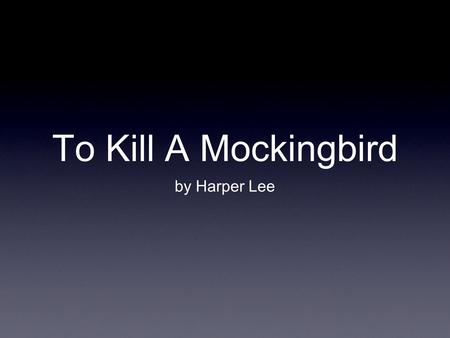 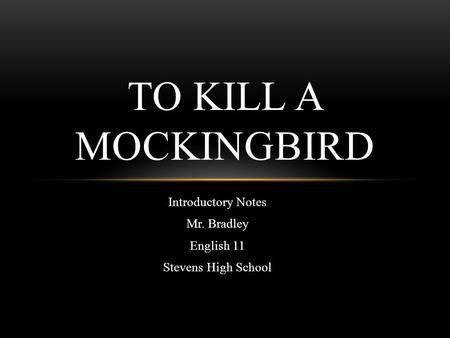