5 I. Compounds A. Compounds 1. chemical bonds a. the attractive force that holds atoms or ions together

7 3. Molecular formula a. a chemical formula that shows the number and kinds of atoms in a molecule, but not the arrangement of atoms b. H2O c. NaCl d. C12H22O11

10 B. How does structure affect properties?
1. compounds with network structures are strong solids a. quartz and sand – SiO2 b. high melting and boiling points c. requires a lot of energy to break the bonds

11 2. Some networks are made of bonded positive and negative ions
a. salt – NaCl b. Na+ and Cl- ions are bonded together forming large networks c. increases strength, high melting and boiling points

14 II. Ionic and Covalent Bonding
A. What holds bonded atoms together? 1. the outermost energy level of a bonded atom is full of electrons a. valence electrons – atoms want 8 2. bonds can bend and stretch without breaking

19 B. Ionic Bonds 1. ionic bond a. a bond formed by the attraction between oppositely charged ions 2. ion a. an atom or group of atoms that has lost or gained one or more electrons

24 3. Formed by the transfer of electrons
a. ie – NaCl 4. Ionic compounds are in the form of networks, not molecules 5. When melted or dissolved in water, ionic compounds conduct electricity

25 6. Usually formed between metals and nonmetals

26 C. Covalent Bonds 1. a bond formed when atoms share one or more pairs of electrons

29 D. Polyatomic Ions 1. an ion made of two or more atoms a. hydroxide ion - OH- b. carbonate ion – CO32- c. ammonium ion - NH4+ 2. some compounds have both ionic and covalent bonds – made of polyatomic ions

30 III. Compound Names and Formulas
A. Naming Ionic Compounds 1. Names of cations include the elements of which they are composed 2. Names of anions are altered names of elements 3. Some elements must show their charge

33 d. Write the chemical formula indicating with subscripts how many of each ion are needed to make a neutral compound

36 B. Naming Covalent Compounds
1. numerical prefixes are used to name covalent compounds of two elements 2. mono is not used on the first element in the formula

41 19.2 Chemical Formulas All compounds have an electrical charge of zero; that is, they are neutral.

42 19.2 Oxidation Number An oxidation number indicates how many electrons are lost, gained, or shared when bonding occurs.

46 19.3 Comparing Molecules Key Question:
What is the meaning of a chemical formula? *Read text section 19.3 AFTER Investigation 19.3

51 19.3 Comparing Compounds The Avogadro number is the number of atoms in the atomic mass of an element or the number of molecules in the formula mass of a compound when these masses are expressed in grams. One set of 6.02 x 1023 atoms or molecules is also referred to as a mole of that substance. 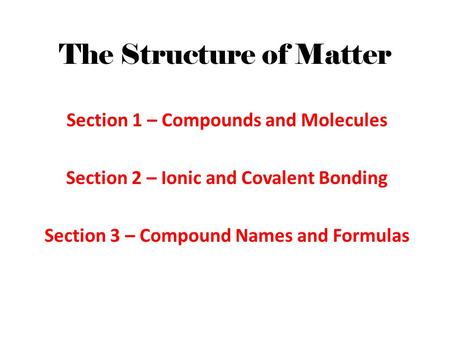 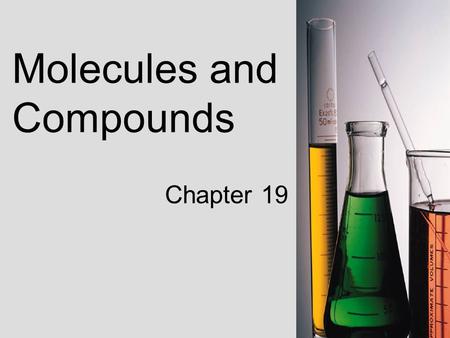 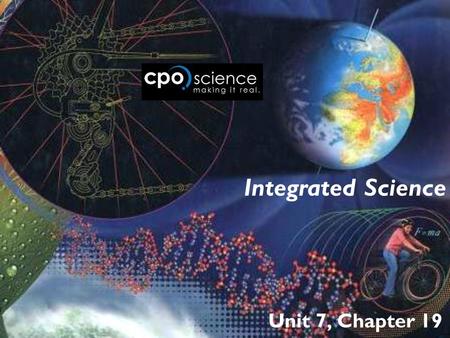