3 Definition and Formation of Crude Oil
Crude oil is a complex mixture of naturally occurring hydrocarbons found within the earth. It consists mainly of a variety of alkanes, cycloalkanes and aromatic hydrocarbons. Crude oil was formed from the remains of microscopic plants and animals that were buried and preserved in rocks millions of years ago.

4 These remains slowly decayed as they were buried
deeper within layers of rocks and with time and temperature they were converted to crude oil. The composition and appearance of crude oil depends on its source. Most crude oil looks like thin, brown treacle (molasses), while some are almost colourless volatile(easily evaporated at normal temp.) liquids and others are thick black oils.

5 Crude oil must be separated into various components
and selectively modified before it can be useful. This process is called refining and occurs in an oil refinery. The primary process for separating the components of crude oil is fractional distillation.

8 Percentage of Crude Oil
Fractions Percentage of Crude Oil Uses Refinery gas 1 - 2% Gaseous fuel or it can be liquefied under pressure to produce liquefied petroleum gas (LNG). It can also be used as feedstock for making petrochemicals. Gasoline & Naphtha 15 – 30% Gasoline is used as motor fuel for internal combustion engines. Naphtha is used as chemical feedstock for conversion to other products. Kerosene 10 – 15% Jet fuel and for domestic heating. Gas oil (diesel oil) 15 – 20% As a fuel in diesel engines and industrial furnaces . Residue 40 – 50% Fuel oil used is used as fuel for ships and power stations, lubricating oils and waxes are used for motor oil, grease and other lubricants and bitumen is used for road surfacing and roofing material.

9 Cracking Of Crude Oil Fractions
Cracking is a process in which large hydrocarbon molecules are broken down into smaller molecules. For example, dodecane could break into decane and ethene: C₁₂H₂₆ C₁₀H₂₂ + C₂H₄ or into nonane and propene: C₁₂H₂₆ C₉H₂₀ + C₃H₆ Cracking is carried out either using heat (thermal cracking) or a catalyst (catalytic cracking).

10 Thermal Cracking Thermal cracking involves rapidly heating the hydrocarbon to temperatures of about 800⁰C and then cooling it. This process occurs within a second. The high temperatures can cause the C - C bond to undergo homolytic fission, leaving each carbon with a single unpaired electron. For example, octane could break down into a hexyl radical and an ethyl radical:

11 C₁₂H₂₆ C₁₀H₂₁˙ + C₂H₅ ̇ The raised dot ( ̇) indicates an unpaired electron. These free radicals can then undergo further reactions. For example, they can lose a hydrogen atom to form a stable molecule. The ethyl radical becomes ethene in such a reaction: C₂H₅ ̇ C₂H₄ + H ̇

12 The hydrogen atom, which is a free radical, can combine with the decyl radical to form decane. H˙ + C₁₀H₂₁˙ C₁₀H₂₂ Or two hydrogen atoms can combine together to form hydrogen gas: H ̇ + H ̇ H₂ Thermal cracking is generally used for cracking the residue fraction of crude oil.

13 Catalytic Cracking Catalytic cracking (cat-cracking) involves the use of a catalyst at lower temperatures to break the bonds of the hydrocarbon molecules. The reaction is usually catalyzed by a powdered mixture of alumina and silica (Al₂O₃/SiO₂) at about 500⁰C. The C-C bond undergoes heterolytic fission which results in a mechanism involving carbocations.

14 Catalytic cracking is used to crack the distilled fractions such as diesel oil and kerosene into smaller molecules. The cracked compounds are important to produce more valuable fuel as well a chemical feedstock for the petrochemical industry.

15 Past Paper Question 1.) a). Briefly describe the principles involved in i). fractional distillation (3 marks) ii). cracking. (2 marks) b). Give a balanced equation to illustrate cracking. (1 mark) c). Explain the importance of EITHER fractional distillation OR cracking. (1 mark) d). Suggest ONE adverse effect associated with the extraction of crude oil and comment on the environmental problems that result. (3 marks) 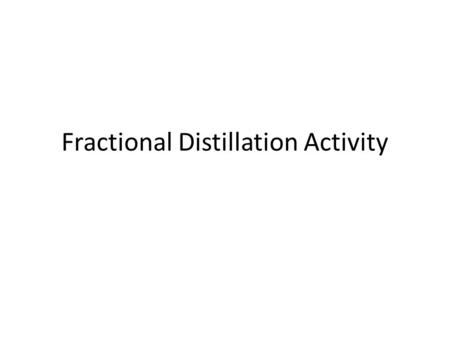 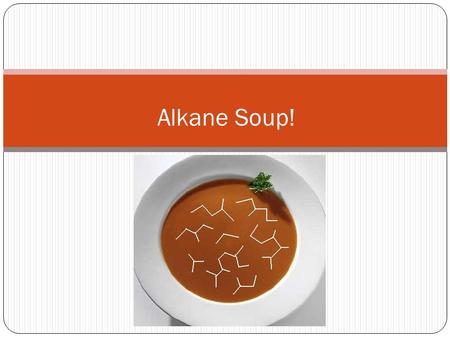 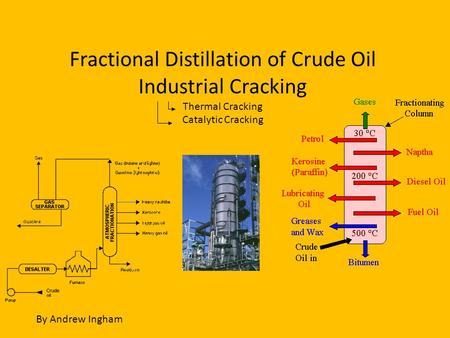 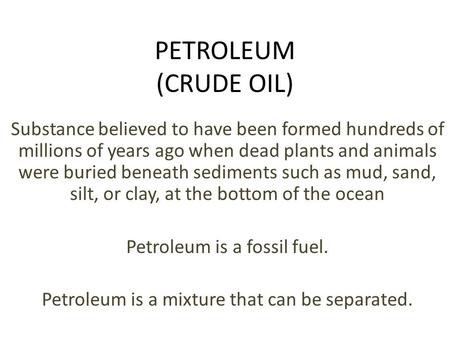