3 How coal formed Millions of years ago trees died and fell to the bottom of swamps. Over time they became covered by mud and rock. …the trees became fossilized, forming coal. Over millions of years, due to high temperatures and pressure…

4 How oil and natural gas formed

6 How oil and natural gas formed
Q1 Explain why oil contains carbon and hydrogen. Q2 Explain where the energy in oil originated.

7 The importance of oil The hydrocarbons in crude oil are essential to our way of life We use them as fuels for most forms of transport. We also use them as raw materials from which a HUGE range of useful everyday substances are made .. Such as…………..make a list!

8 Making oil useful Crude oil is a mixture of hydrocarbons with a VERY wide range of sizes. Crude oil itself has no uses because its properties are not definite. To make crude oil into useful substances we have to separate the mixture into molecules of similar size. This is done in an oil refinery in a process called fractional distillation. The physical property used to separate the fractions is boiling point.

13 Why are the fractions useful?

17 What is crude oil? Crude oil is a mixture of different sized hydrocarbons. The exact composition depends upon where the oil comes from but typically it contains a lot of big molecules. (Why is this not good?) Small molecules Big molecules Medium molecules

18 Which is a correct statement about crude oil?
A mixture of carbohydrates. Formed by the decay of dead sea creatures. Consist of a mixture of very large molecules. Is purified in an oil rig. 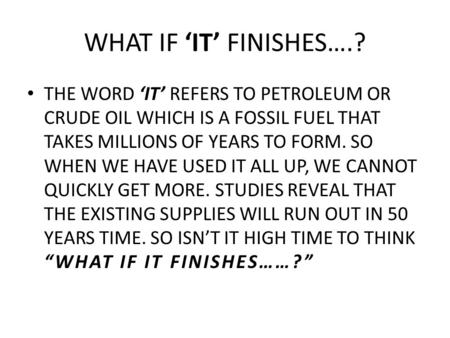 WHAT IF ‘IT’ FINISHES….? THE WORD ‘IT’ REFERS TO PETROLEUM OR CRUDE OIL WHICH IS A FOSSIL FUEL THAT TAKES MILLIONS OF YEARS TO FORM. SO WHEN WE HAVE USED.