Presentation on theme: " ‘Recombinant DNA Technology’ is when we combine genes from different organisms, in which the resulting organism is considered to be genetically modified."— Presentation transcript:

2  ‘Recombinant DNA Technology’ is when we combine genes from different organisms, in which the resulting organism is considered to be genetically modified.  Genetically Modified (GM) can also be referred to as Genetically Engineered (GE), or Transgenic.

4  There are many health risks associated with genetically modified crops, some known risks are:  The transfer of antibiotic resistance genes between organisms, may render drugs useless.  May increase what some say is the link between behavioral disorders in children to the foods they have eaten.  Could cause a boost of asthmatic children born in the US.  Unknown long term effects of insect repellant plants on human life.

6  In many other countries the people are fighting against genetically modified foods.  As in china where there are many protests on the mater of the effects of transgenic crops  And in Europe were the public is fighting for “GM free zones”

7 Countries The USA grew 53% of 252 million acres, of genetically modified crops in the year 2006. These numbers have been increasing in the past four years, with an exponential rate in third world countries.

8  The Federal Drug Administration and Biotech Industry require no testing on new Genetically Modified organisms, claiming they are just like other foods.  Through cross pollination some companies claim to own the rights to others crops.  Few large companies will dominate the industry.  Adding nutrients to food.

9  The largest transgenic seeds on the market now is Round Up ready corn and canola.  These are plants that do not die when sprayed with Round Up.  They are also pest repellent.  Flavor Saver tomatoes were pulled off the market in the late 90’s but it is unknown if they are for sale again.  The flavor savers were meant to taste better and last longer but ended up tasting strange, and people did not like them.

10 A POLL ON WHICH TYPE PEOPLE WOULD RATHER BUY

Download ppt " ‘Recombinant DNA Technology’ is when we combine genes from different organisms, in which the resulting organism is considered to be genetically modified." 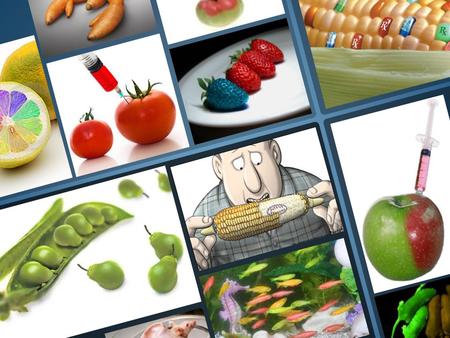