3 Bioengineered Foods: Friend or Foe?  Your task was to design a persuasive pamphlet in support of or in opposition to the mandatory labeling of genetically altered food based on scientific evidence.  You used various sources to support your stance, carefully considering the credibility of those sources.

4 What are genetically modified foods?  They are foods that look altogether “normal” in all respects, yet they are genetically different.  Inside their DNA – the genetic code that determines the way they look, feel, and taste is an extra gene.  Bioengineers are using gene-splicing technology to add this gene to developing crops and foods.

6 What types of foods are genetically modified? Corn and tomatoes…Rice and soybeans… Cotton and canola…Alfalfa and sweet potatoes…

8 What are the ‘cons’ of GMF?  Potential human health impact such as production of new allergens.  Domination or monopolization of world’s food supply by only a few nations.  The ethical issue surrounds the tampering of nature by mixing genes among species.

9 How are GMF labeled?  Agribusiness industries believe labeling should be voluntary.  Consumer interest groups are demanding mandatory labeling.  Do people have the right to know what they are eating?  Are consumers willing to absorb the cost of that labeling?

10 In Conclusion…  GMF have the potential to…  Solve world hunger  Protect and preserve the environment by increasing crop yield  Reduce dependence on pesticides and herbicides  HOWEVER  We must proceed with caution to avoid causing harm to human health and environment. 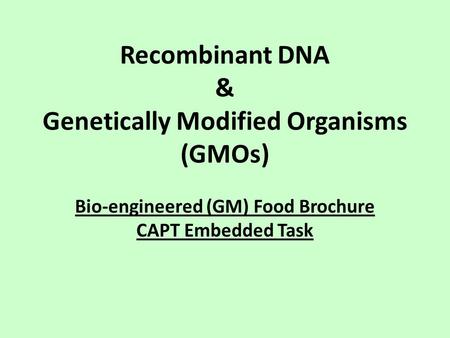 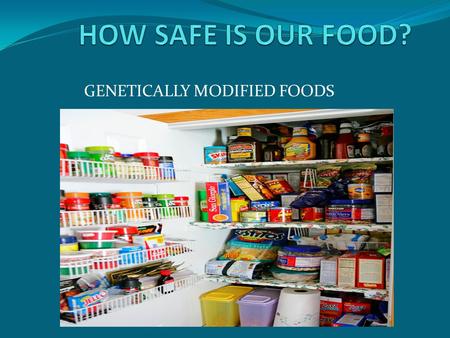