2 What is a GMO? GM is a special set of technologies that alter the genetic makeup of organisms such as animals, plants, or bacteria. Uses recombinant DNA technology Basically, genetic modification takes a gene containing a desired trait from one organism and sequences the gene into a new organism.

3 How does this apply to us? We eat genetically modified organisms on a daily basis! They are right on the shelves of our grocery stores We bake them into casseroles and stir them into soups We feed them to our children and our animals

4 The GM Tomato The first GM food to be made available to the consumer was a tomato called FlavrSavr in 1994. Producers wanted a tomato that would last longer, staying fresher and firmer once it was picked. These tomatoes contain less of the substance which causes tomatoes to rot.

6 What are the advantages over a regular tomato? Because the GM tomatoes can remain fresh longer they can be allowed to ripen in the sun before picking - resulting in a better tasting tomato. GM tomatoes can tolerate a lengthier transport time. This means that market gardens can avoid picking tomatoes while they are green in order that they will tolerate the transport. The producers also have the advantage that all the tomatoes can be harvested simultaneously.

7 Disadvantages? At first, these tomatoes were antibiotic resistant Antibiotics are important for fighting disease, so it would have been a problem if these genes had made it into humans or animals Now we can grow GM tomatoes which are no longer resistant to antibiotics

8 What are the advantages of GM foods on a larger scale? Food can stay fresher longer Crops can be engineered to be pest resistant without the use of pesticides GM crops have the potential to be grown in impoverished areas which don’t naturally grow food very well or where nutrient deficiencies are prevalent Enhanced taste and quality Increased crop yields and nutrients

10 What are the dangers/potential dangers of GM foods? We have only been eating GM foods for a relatively short time, so we don’t know what the long-term side affects might be Is there a chance that the GM plant could breed with other plants and create something new/unwanted? Could a gene be inserted into a GM food which people were allergic to, and might eat unknowingly?

11 Dangers cont. Objections to consuming animal genes in a vegetable form A few corporations dominating world food production Having to continually create new crops when pests grew immune to pesticidal crop strains Losing the original naturally growing seed of a crop The public not knowing what they are eating when labeling is not mandatory

12 A good idea for the use of a GM crop Golden Rice “Biofortified rice as a contribution to the alleviation of life-threatening micronutrient deficiencies in developing countries” Vitamin A Deficiency causes 250,000 to 500,000 children to go blind every year Vitamin A is taken from the green part of the rice and put into the seed So why not put Vitamin A in the rice they eat?

14 What are the problems with Golden Rice? Greenpeace presents strong opposition to Golden Rice They say it does not address the underlying issues of poverty And that Golden Rice still provides ineffective amounts of Vitamin A Some scientists oppose it on the grounds that it is not being tested on animals before tested with humans

15 Who is looking at GM foods? Monsanto is one of the forerunners in the field of Genetically Modified Organism research. They also produce many seeds for farming purposes. Ironically, the company also produces the herbicide Roundup. The company was begun in 1901, and in 1981 biotechnology was established as their main focus. In 1982 their scientists became the first to genetically modify a plant cell.

16 What are restrictions on GM foods? Americans have been eating GM foods without necessarily realizing it for about 15 years now Europe has much more stringent policies concerning GM foods than the US does All GM foods in Europe must be labeled, as well as their GM steps traced and documented The US does not require GM foods to be labeled

17 How does a GM food become “safe” for consumption? The FDA has strict requirements that a GM food must meet before becoming available for public consumption. For example, any new gene being introduced into a food must be already approved by the FDA as safe 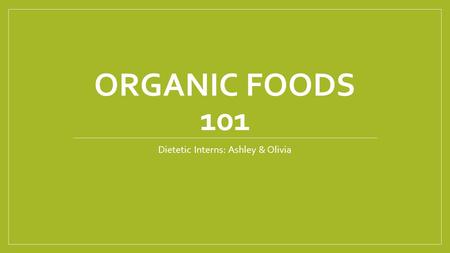