2 International Telecommunication Union New Delhi, India, 19-20 December 2011 Standards and technology The vast majority of products currently on the market were developed in compliance with, or in conformity with, one or more standards. Many standards aim at protecting human safety, health or the environment. Standards play an important role in promoting compatibility and interoperability of products or parts from different producers. Standardization also facilitates the exchange and mutual use of information among the parties involved, thereby enabling different products to work together.

4 International Telecommunication Union New Delhi, India, 19-20 December 2011 Interface of standards with the patent system Patents and standards serve certain common objectives insofar as they both encourage or support innovation as well as the diffusion of technology So long as the patent system motivates companies to contribute their technologies to standardization the best solution is adopted as a standard for a wide use in the market at reasonable cost The patent system and the standardization process share the objective of promoting innovation and diffusion of technology. However, if patent rights are enforced in a way that may hamper the widest use of standards, some antagonism between the two systems may arise.

5 International Telecommunication Union Conflicting trajectories ? Standards, although mostly set by industry, are perceived by broad public to be a kind of public good. In a technically interlinked world, their nature is potentially global. Thus, accessibility and ownership issues gain a lot of momentum and are debated in many different fora. Patents are private monopolies. They can be used to exclude any other from use of the owned technology. Embedded in standards, they offer their owners benefits of a 'double monopoly'. Their territorial nature can be used to co-shape standards in one region and block them in other regions. Exclusively owned technologies embodied in potentially global standards such as mobile telephony can produce tensions, if rules of inclusion and use are not clear, both to other technology developers and users (telecom operators).

6 International Telecommunication Union New Delhi, India, 19-20 December 2011 Possible conflicts One possible scenario is that a patent owner participating in the standard ‑ setting process may conceal existing patents or pending applications which are essential to implementation of the standard under discussion (essential patents) with a view to enforcing the patent rights only after the adoption of the standard and refuse to license the patent on reasonable terms and conditions.

7 International Telecommunication Union New Delhi, India, 19-20 December 2011 Possible conflicts - Continuation Another scenario is that an essential patent may be owned by a patentee who did not participate in the standard-setting process and who may enforce the patent rights in a manner that discourages or blocks implementation of the standard. The latter “hold-up” problem may also arise where a standard is affected by a number of patents owned by different patentees. Even if each patent owner is willing to license his patent on reasonable terms and conditions, the total royalty claim may inhibit implementation of the standard.

8 International Telecommunication Union The case of ICT standards In particular, ICT Standards are priority for EPO because of the very large number of patents, usually included therein, and thus because of the possible conflicts arising. In the field of ICT Standards, strengths and weaknesses of the patent system are magnified, as there is a lot of public and political pressure for 'open platforms' For these reasons, at the EPO - A cross-department Working Group has been created. - Since 2006 closer cooperation with the ICT-standards world is promoted

12 International Telecommunication Union Conclusion Proper functioning of both systems necessitates the resolution of potential conflicts. Patent authorities should become pro-active and include standards-related documentation in their search databases. Standardisation organisations could link their IP declarations databases to the public registers of the major patent offices, such that the included information (validity of application, scope of granted patents, patent family, etc.) is constantly updated and valid. Patent rules of standardisation organisations, in particular dissemination and confidentiality rules, should be clear and enforced. 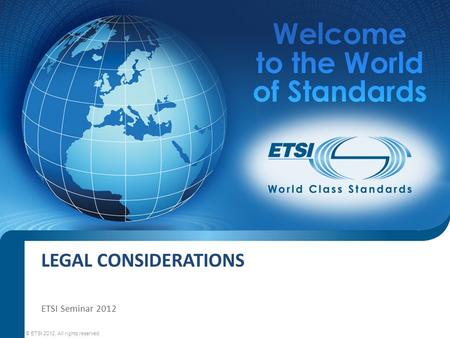 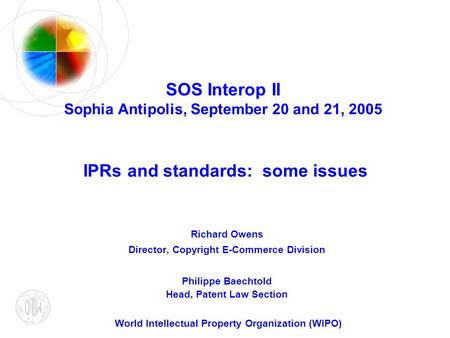 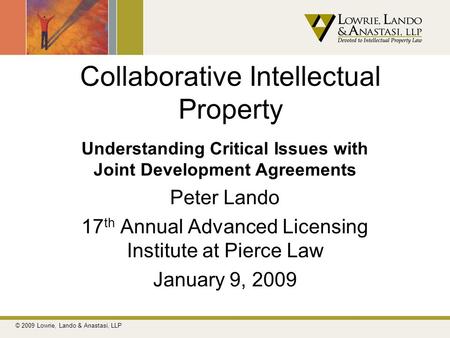 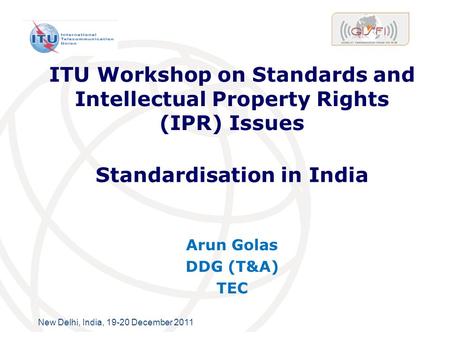 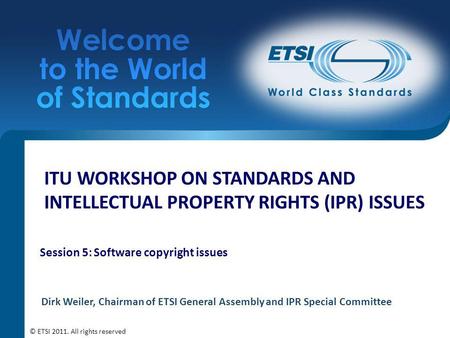 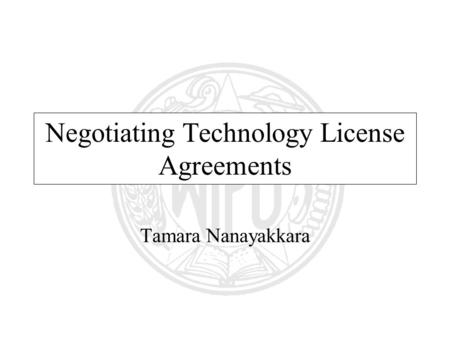 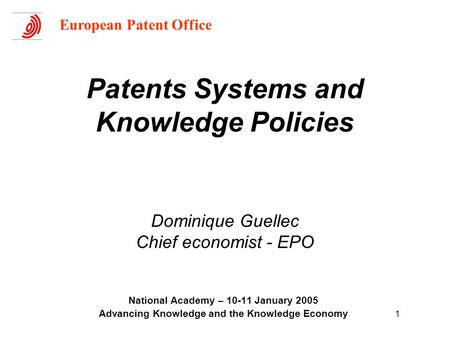 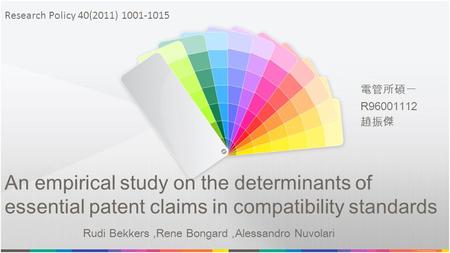 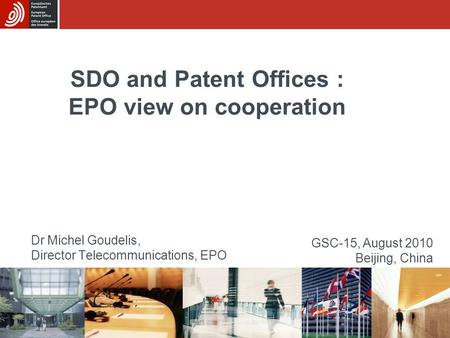 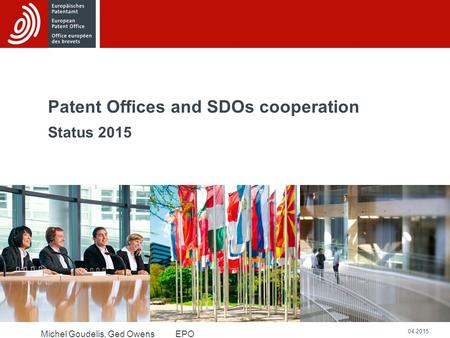 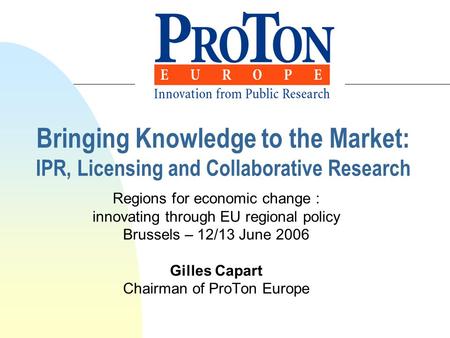 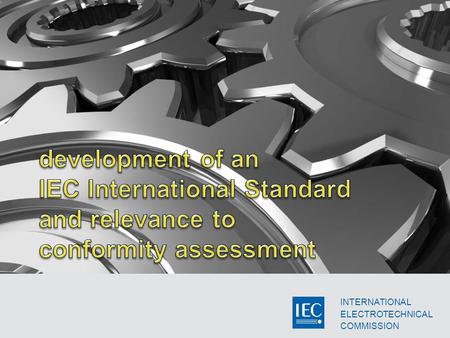 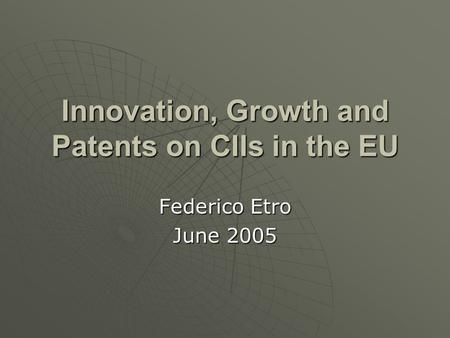 Innovation, Growth and Patents on CIIs in the EU Federico Etro June 2005. 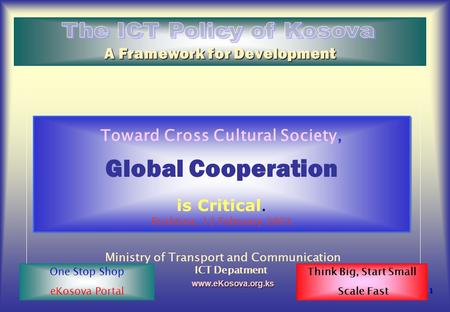 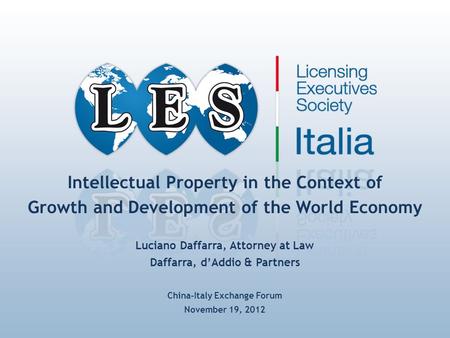 Intellectual Property in the Context of Growth and Development of the World Economy Luciano Daffarra, Attorney at Law Daffarra, d’Addio & Partners China-Italy. 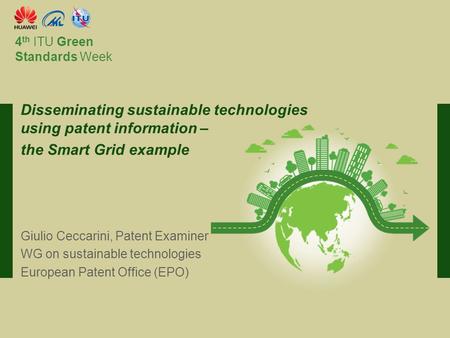 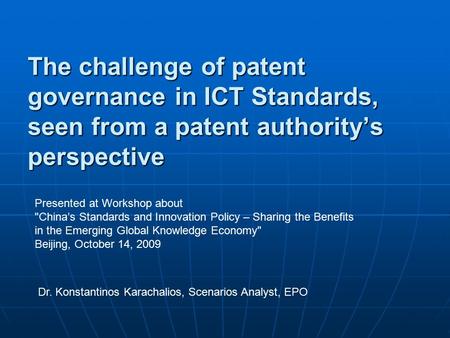