Presentation on theme: "The War in Europe and North Africa 24-1 The Main Idea After entering World War II, the United States focused first on the war in Europe. Reading Focus."— Presentation transcript:

1 The War in Europe and North Africa 24-1 The Main Idea After entering World War II, the United States focused first on the war in Europe. Reading Focus How and why did the Allies fight the Battle of the Atlantic? What were the key events of the war in the Soviet Union? What did American forces accomplish in North Africa and Italy? What were the events and significance of the Allies’ D-Day invasion of France?

2 How and why did the Allies fight the Battle of the Atlantic? Defeating the Axis Powers depended on control of the seas. The Atlantic needed to be kept safe for shipping so that soldiers and goods could be transported from the United States to the other Allied nations. Germany had a very powerful navy including with new surface ships (including the giant Bismarck) and U-boats. German used new tactics to increase U-boat effectiveness such as the so-called wolf pack, subs traveling in groups of 30 or more. U-boats sent hundreds of ships and tons of supplies to the bottom of the sea. At the same time, the German navy lost few of their boats. The entry of the United States into the war would help turn the tide in the Battle of the Atlantic.

4 Allied ships and aircraft Cracking the Enigma American shipyards began producing new ships at an amazing rate. The new ships were used to form larger, better-equipped convoys, which cut down on the effectiveness of U-boat attacks. Allied aircraft protected convoys from the air. The Allies broke the German code system, which was called the Enigma. The Allies began to gain vital information about the locations and plans of U-boat formations. Finally, the Allies had an advantage over the Germans. The Allies Fight the Battle of the Atlantic

5 World War II in the Soviet Union 1.Hitler broke his nonaggression pack with Stalin and invaded the Soviet Union in 1941. –The Soviets then joined the Allies as enemies of the Axis Powers. –At first the Soviets seemed unable to stop the German blitzkrieg; however, the bitterly cold Russian winter proved a great ally. –Still, the Germans held a vast portion of the western Soviet Union and besieged the city of Leningrad. 2.The Germans attacked Stalingrad in August 1942. –The Soviets refused to let Stalingrad fall, and Hitler suffered a stunning defeat in early 1943. 3.Stalingrad marked the beginning of Germany’s collapse in the Soviet Union. –Soviet forces pushed Germany out of Russia, but lost 12 million soldiers and millions of civilians.

6 American Forces in North Africa and Italy Why was North Africa important? By controlling North Africa, the British could protect shipping on the Mediterranean Sea. They needed the ability to ship oil from the Middle East through the Suez Canal. What was the result of fighting in North Africa? Italy could not drive the British from Egypt. Hitler sent troops under the direction of Erwin Rommel – nicknamed the Desert Fox. After a back-and-forth battle for North Africa, the Allied forces handed the Germans a major defeat at the battle of El Alamein. What happened in Italy? British and American forces invaded Italy in 1943. Called Operation Torch. The Italian people forced Mussolini from power, but Hitler rushed into Italy to stop the Allies.

9 D-Day: The Invasion of France To end the war as quickly as possible, the Allies planned Operation Overlord—a large invasion of mainland France. The Allies landed at Normandy on June 6, 1944—called D-Day—and began to march on France.

13 Battle of the Bulge Surprise offensive by Germans Key moment came at the Belgium city of Bastogne. Lieutenant General George S. Patton provided relief for the soldiers at Bastogne. Symbol of American strength and determination

Download ppt "The War in Europe and North Africa 24-1 The Main Idea After entering World War II, the United States focused first on the war in Europe. Reading Focus." 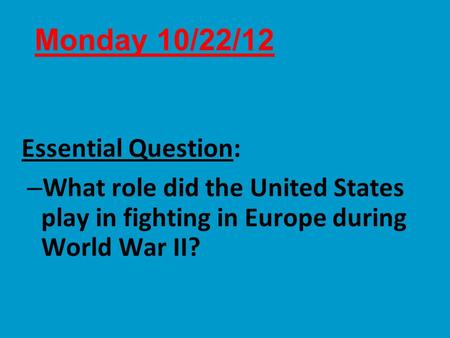 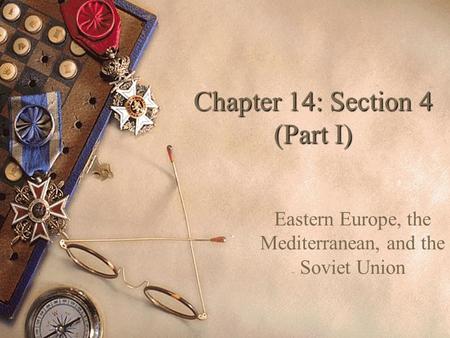 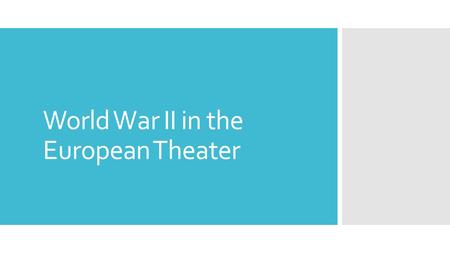 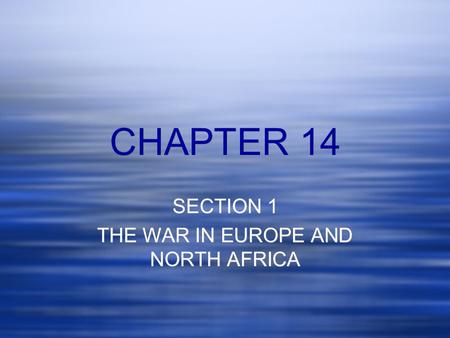 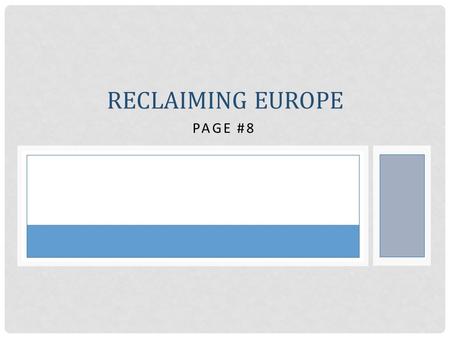 PAGE #8 RECLAIMING EUROPE. REMEMBER... What event brings the U.S. into this war? The U.S. brings fresh troops to the fight Who is the only allied country. 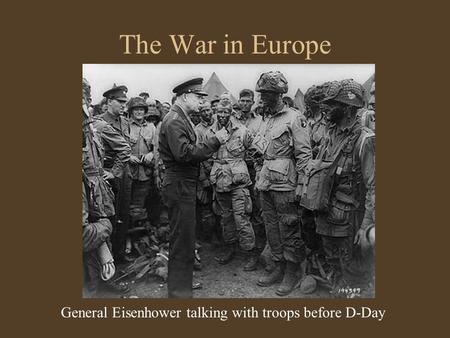 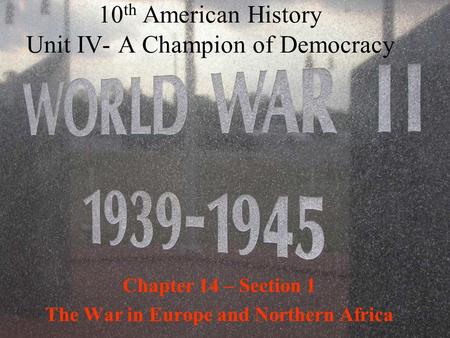 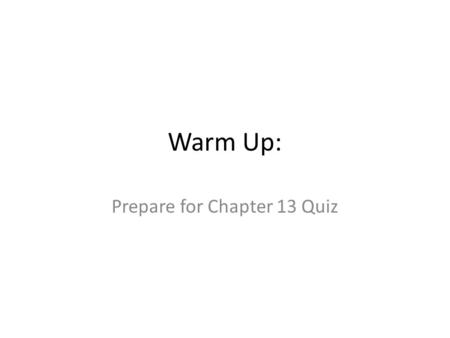 Warm Up: Prepare for Chapter 13 Quiz. Chapter 14 Section 1 The War in Africa & Europe. 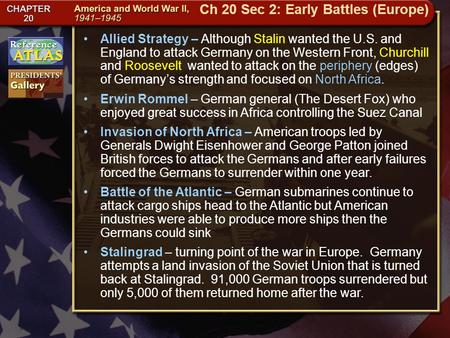