2 What is Morphology? What is a ‘word’?
Items marked in black separated by spaces? What about the ‘thecatsatonthemat’? In Swahili the form ‘nitakupenda’ stands for what we might say in English ‘I will love you’? What about the word ‘replayed’ and ‘play’? The concept ‘word’ turns out to be a complex fuzzy category. Depend on ‘elements’ rather than ‘words’

3 Definitions Morphology is the branch of linguistics that studies the structure of words. = the study of how words are built  = set of morphemes + the rules of how they are combined How words are put together out of smaller pieces  morphemes e.g. replayed consists of re+play+ed

5 Morphemes A word that contains more than one morpheme is a morphologically complex word One morpheme is the basic one, the core of the form  root or stem The add-ons bound morphemes are affixes E.g. ‘rearranged’ ‘teachers’

10 Derivation vs. Inflection
It changes the category and/or the type of meaning of the word, so it is said to create a new word. e.g. suffix –ment in government It does not change either the grammatical category or the type of meaning found in the word. e.g. suffix –s in books Bound morphemes always appear in order, first derivational then inflectional. E.g. teachers

15 Morphs and allomorphs Phoneme and allophone?
Morphs are the actual realization of morphemes. Morphemes are abstract units- morphs are discrete. Some morphemes are realized by one or more morphs according to their position in a word or a sentence  allomorph

16 Morphs and allomorphs Morpheme of plurality represented as -s
E.g Cats – digs – forces Allomorphs are represented {-s}, {-z} and {-iz} Phonetic influence of neighboring sound Allomorphs for the morpheme of past tense –ed? 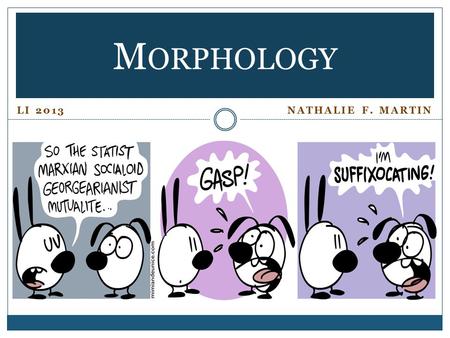