Presentation on theme: "Morphology Words and Rules. Lexicon collection of the meaningful sound and their meanings in a language dictionaries attempt to be written versions of."— Presentation transcript:

5 Morphemes Morpheme is the smallest unit of meaning A word might have more than one morpheme Words with only one morpheme are called monomorphemic Morphology: study of morphemes and the rules used to create new words Use both lexicon and morphological rules in creating language

6 Types of Morphemes Free: can stand on own Bound: must be attached Affixes non productive roots Roots: cannot be reduced anymore “bank” in banker “ceive” in receive Stem: root with an affix attached

10 Allomorphs When one morpheme is pronounced more than one way consistent and predictable past tense inflection; plural inflection; singular abstract article Allomorphic rules guide the usage of different allomorphs

Download ppt "Morphology Words and Rules. Lexicon collection of the meaningful sound and their meanings in a language dictionaries attempt to be written versions of." 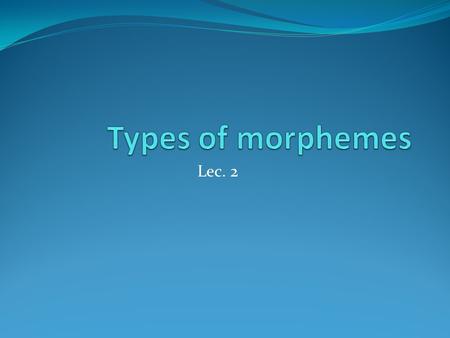