3 How Ions Form As you already learned, an ion is an atom or group of atoms that has an electric charge. Figure 16 lists some ions you will often see in this book. Use this table as a reference while you read this section and other chapters.

8 Polyatomic Ions Notice in Figure 16 that some ions are made of several atoms. For example, the ammonium ion is made of nitrogen and hydrogen atoms. Ions that are made of more than one atom are called polyatomic ions (pahl ee uh tahm ik). The prefix poly means “many,” so polyatomic means “many atoms.” You can think of a polyatomic ion as a group of atoms that reacts as a unit. Like other ions, polyatomic ions have an overall positive or negative charge.

10 Because oppositely charged particles attract, the positive Na+ ion and the negative Cl− ion attract each other. An ionic bond is the attraction between two oppositely charged ions. Ionic bonds form as a result of the attraction between positive and negative ions. A compound that consists of positive and negative ions, such as sodium chloride, is called an ionic compound.

11 Figure 17 Formation of an Ionic Bond Follow the process below to see how an ionic bond forms between a sodium atom and a chlorine atom. Relating Cause And Effect Why is sodium chloride electrically neutral?

12 Chemical Formulas and Names Compounds can be represented by chemical formulas. A chemical formula is a combination of symbols that shows the ratio of elements in a compound. For example, the formula for magnesium chloride is MgCl 2. What does the formula tell you?

13 Formulas of Ionic Compounds From Figure 16 you know that the charge on the magnesium ion is 2+. When ionic compounds form, the ions come together in a way that balances out the charges on the ions. The chemical formula for the compound reflects this balance. Two chloride ions, each with a charge of 1− will balance the charge on the magnesium ion. That’s why the formula of magnesium chloride is MgCl 2. The number “2” is a subscript.

14 A subscript tells you the ratio of elements in the compound. For MgCl 2, the ratio of magnesium ions to chloride ions is 1 to 2. If no subscript is written, the number 1 is understood. For example, the formula NaCl tells you that there is a 1 to 1 ratio of sodium ions to chloride ions. Formulas for compounds of polyatomic ions are written in a similar way. For example, calcium carbonate has the formula CaCO 3.

16 If the negative ion is a single element, as you’ve already seen with sodium chloride, the end of its name changes to -ide. For example, MgO is named magnesium oxide. If the negative ion is polyatomic, its name usually ends in -ate or -ite, as in Figure 16. The compound NH 4 NO 3, named ammonium nitrate, is a common fertilizer for gardens and crop plants.

17 Interpreting Data Use the periodic table and Figure 16 to identify the charges of the ions in each ionic compound listed below. Then write the formula for each compound. sodium bromide lithium oxide magnesium sulfide aluminum fluoride potassium nitrate ammonium chloride

18 Properties of Ionic Compounds Table salt, baking soda, and iron rust are different compounds with different properties. You wouldn’t want to season your food with either iron rust or baking soda. However, these compounds are alike in some ways because they are all ionic compounds. In general, ionic compounds are hard, brittle crystals that have high melting points. When dissolved in water or melted, they conduct electricity.

19 Ionic Crystals Figure 19 shows a chunk of halite, or table salt, NaCl. Pieces of halite have sharp edges, corners, flat surfaces, and a cubic shape. Equal numbers of Na+ and Cl - ions in solid sodium chloride are attracted in an alternating pattern, as shown in the diagram. The ions form an orderly, three-dimensional arrangement called a crystal.

20 Figure 19Ionic Crystals The ions in ionic compounds are arranged in specific three-dimensional shapes called crystals. Some crystals have a cube shape like these crystals of halite, or sodium chloride. Making Generalizations What holds the ions together in the crystal?

21 In an ionic compound, every ion is attracted to ions of opposite charge that surround it. It is attracted to ions above, below, and to all sides. The pattern formed by the ions remains the same no matter what the size of the crystal. In a single grain of salt, the crystal pattern extends for millions of ions in every direction. Many crystals of ionic compounds are hard and brittle, due to the strength of their ionic bonds and the attractions among all the ions.

22 High Melting Points What happens when you heat an ionic compound such as table salt? When you heat a substance, its energy increases. When ions have enough energy to overcome the attractive forces between them, they break away from each other. In other words, the crystal melts to a liquid. Because ionic bonds are strong, a lot of energy is needed to break them. As a result, ionic compounds have high melting points. They are all solids at room temperature. Table salt must be heated to 801°C before the crystal melts.

24 Figure 20Ions in Solution A solution of sodium chloride conducts electricity across the gap between the two black rods of a conductivity tester. As a result, the bulb lights up. 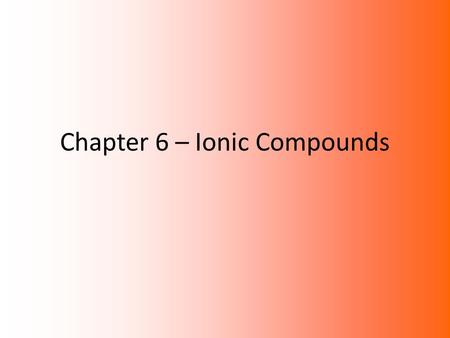 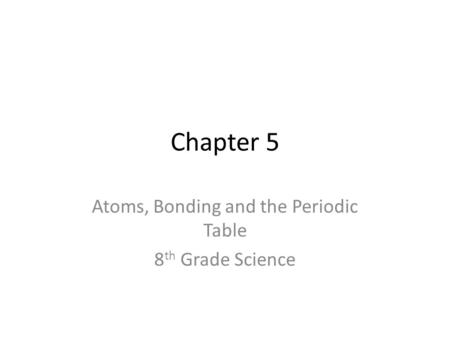 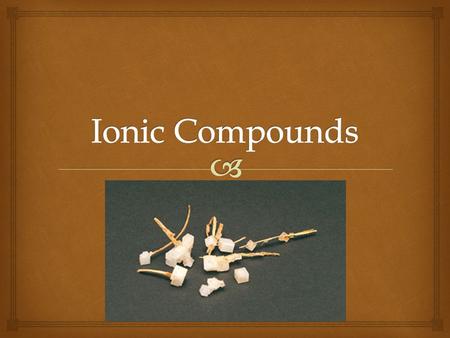