Presentation on theme: "Summary Summarizing Putting the main idea(s) into your own words Including only the main point(s) Are significantly shorter than the original Take a broad."— Presentation transcript:

2 The Gist: A few steps to a summary Note the name, source (if applicable), and author of the article or story Read the article, notating as you go Fill out the 5 W’s and H: Who What Where When Why How Using this information, formulate your summary

3 Do Now: Grab notebooks to take notes on King Arthur

4 What do you know? With a partner, write down as much as you can about these words or questions…. Camelot Excalibur Holy Grail Knights of the Round Table Question: Which legendary character or characters are all of these terms associated with?

5 Was King Arthur real? Probably based upon a Celtic king who lived in southwestern England during the 6th century Led his warriors against invading armies of Saxons Grew famous in his own time for his war efforts The legend grew as the story was passed from generation to generation

8 Knights of the Round Table Arthur married Guinevere and established his court at his castle at Camelot The legendary Round Table was a wedding gift from his father-in- law It was a magical table that could expand to accommodate fifty, one hundred, or even one hundred and fifty knights Whenever a new knight joined Arthur's court, his name appeared on the back of one of the seats at the table

9 The Knights were men of courage, honor, dignity, courtesy, and nobleness They protected ladies and damsels, honored and fought for kings, and undertook dangerous quests The emblem of the knights was worn around their necks The Order's dominant idea was the love of God, men, and noble deeds. Sir Lancelot is the most well-known knight Knights of the Round Table

11 The Sword in the Stone This is an excerpt from Le Morte d’ Arthur, by Sir Thomas Malory (p. 755) Vocabulary Confronted: faced Inscription: something inscribed or engraved, as on a coin or monument Oath: solemn promise or declaration; vow Ignoble: not noble in birth or position Tumultuous: wild, noisy Realm: kingdom Coronation: act or ceremony of crowning a sovereign

12 Timeline Make a timeline showing the main events that take place in the story You do not need to use dates, just events in chronological order Try to include all major characters Based on your timeline, write a summary of the story

14 The Literature of Romances Romances first appeared in the Middle Ages (500 AD and lasted until 1400 AD) Developed in France then spread rapidly throughout Europe The stories are called romances because they were first told in Old French, which is a Romance language (derived from Latin, language of the Romans

15 Romance Literature Usually stories about heroes and knights Stories were passed along orally by story singers and story tellers By the 14 th century, the stories had been written down These stories celebrated chivalry, the code of behavior the medieval knight was supposed to follow

16 Code of Chivalry Knights were to be brave, honorable, loyal, pious, and generous to foes Help the weak and protect women Knights went on quests to prove his courage The most famous is the quest for the Holy Grail

17 The Knight’s Armor Knights who are illustrated in tournaments usually carry a very small shield, while those in war often carry a larger one The knight's shield came to take on symbolic meaning It identified him and his family It was also a way to identify a person because it was hard to see the person’s face

Download ppt "Summary Summarizing Putting the main idea(s) into your own words Including only the main point(s) Are significantly shorter than the original Take a broad." 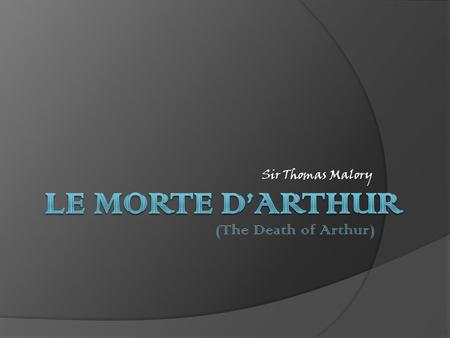