2 Dark Ages The 4th and 5th centuries CE
The Dark Ages were a time in which very little information was written down. People were concerned with day to day survival not scholarship. Very little of this time period is known. Only archeological information is available.

3 Arthur Facts Ambrosius Aurelianus: The Latin name in which Arthur derives. It is believed that the factual Arthur was a Roman who was left in Britain after the Roman forces returned to the continent.

4 Facts This Roman then took up arms with the Britons against the invading Saxon tribes. It is believed that this historical Arthur fought a dozen battles with the invaders. He was mortally wounded in the last battle at Mount Badon around 490 CE

5 Fiction The History of the British Kings by Geoffrey of Monmouth was written in the 12th century. This book was to trace the linage of all the British kings and give historical, accurate information regarding kingship, battles, territory, etc.

6 Fiction Monmouth’s account claims that Arthur was in fact a “true” king. One with a kingdom and a crown. This account was in fact fiction. It gave rise the Arthur legends we have today.

7 Stories of Arthur Historians do know that the stories, the legends of Arthur crossed over into France during the 12th century. It was in France that the new element of courtly love comes into the stories.

8 Stories of Arthur During the mid 12th century the stories traveled to Germany. Wolfram von Echenbach added the Grail Quest to the legends of Arthur and his knights.

9 Stories of Arthur In the early 13th century the stories returned to England. It was at this time that the entourage of knights looking for adventure was added to the tales.

10 Stories of Arthur The stories are romantic. They represent the ideals of chivalry, the devotion to loyalty, generosity and courtesy. In Arthur’s kingdom no one, including the king, was above anyone else. The creation of the round table made everyone equal—a new concept for the English. This ideal would not be repeated until the American Revolution.

11 Importance The idea of a true, blood and flesh king Arthur has played an important role in the history of England. The British crown has used Arthur to justify their rule for hundreds of years.

12 Importance In 1066 William the Conquer claimed that he was in fact a descendant of Arthur. This gave him legitimacy in his takeover of England. Today, Prince Charles’ official name contains the name Arthur. This shows his connection to one of the oldest kings.

13 Sir Thomas Malory He was the first English writer to compile the legends of King Arthur. He was a member of Parliament, England’s ruling body, in 1445. He was known for his hot temper and spent many years in jail (Tower of London).

14 Malory Continued Malory was on the losing side of the War of the Roses. He was accused of everything from cattle rustling to attempted murder. He was in jail when he began composing Le Morte d’Arthur (the Death of Arthur).

15 Malory continued The story Malory wrote centered on King Arthur and his Knights of the Round Table. Malory died in jail. William Caxton, the man who introduced the printing press in England, published Malory’s works.

16 Characters: Arthur King of “Camelot.”
Son of Uther Pendragon, King of England, and Igraine. Legend says he was taken away by Merlin after his birth and raised by pesants. In some stories Arthur becomes king after he pulls the sword from the stone.

17 Characters: Arthur Arthur marries Guinevere (against Merlin’s advice) and was given a round table as part of the dowry. Camelot was Arthur’s personal kingdom—it was NOT a national kingdom.

18 Characters: Guinevere
The wife of Arthur. Unable to have children and this causes problems within the marriage and the kingdom. Eventually she falls into an adulterous relationship with Lancelot.

19 Characters: Lancelot A knight from France.
He was the best, the strongest, the most courageous of all the knights. Once he realizes his feelings for Guinevere he stays away from Camelot.

20 Characters: Bedivere Arthur’s knight
The last knight left after the Battle at Mount Badon. He was to give Excalibur back to the rightful owner.

21 Characters: Merlin A mystical sorcerer.
Charged with looking after Arthur and tutoring him to become king. In some stories he is said to live “backwards” meaning he already knows the future.

22 Characters: Lady of the Lake
She gives the sword Excalibur to Arthur. This sword is different then the one he pulls from the stone to be king. The scabbard of Excalibur posses magical properties—wearer can not be harmed. She gets the sword upon Arthur’s death. 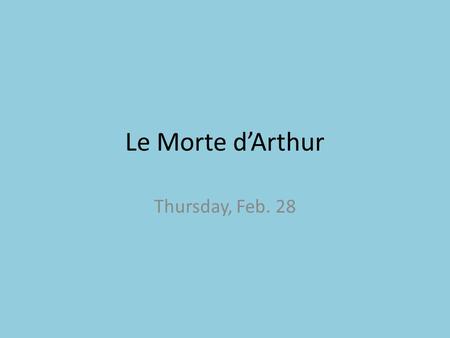