2 Challenges Why do employees join unions? What agencies and laws regulate labor practices? What is union organizing, collective bargaining and contract administration? What is the managerial and HR role in resolving union grievances?

3 What is a Union? Unions – An organization that represents employees’ interests to management on such issues as wages, work hours, and working conditions

5 Role of the Manager in Labor Relations Labor Relations Specialists Managers: day-to-day labor-management relations Need to understand workplace issues associated with unions: –Unions start where employees are dissatisfied –If there is a union managers are responsible for the day-to-day operations of the labor agreement –Need to have a basic understanding of the labor laws so as to not create a liability

6 Labor Relations and the Legal Environment Employer Rights To operate business free from unnecessary interference Union Rights To organize and bargain for their members Individual Rights To choose their representatives or to decide they do not want representation by a union Laws enacted to try and balance:

8 Wa gner Act (National Labor Relations Act) (1935) Five illegal labor practices: Do not keep employees from forming unions or collective bargaining Do not dominate or interfere with the formation or administration of a union or provide financial support for union Do not discriminate against employee to encourage or discourage union membership Do not discharge or discriminate against employee who filed charges (gave testimony) under Act Do not refuse to bargain collectively with the union that employees chose

10 Taft Hartley Act (1947) Six unfair union labor practices: Cannot influence employer’s choice of representation in collective bargaining Causing or attempting to cause an employer to discriminate against any employee who is not a member of the union Refusing to bargain with employer in good faith Asking or requiring its members to boycott products made by a firm engaged in a labor dispute with another union Never charge employees excessive or discriminatory union dues as a condition of membership Never ask an employer to pay for services that are not performed

11 Landrum-Griffin Act (1959) Designed to protect union members and their participation in union affairs, allows the government to regulate union activities: Each union has a bill of rights to ensure minimum standards of internal union democracy Each union must give their constitution to Department of Labor Each union must report its financial activities and financial interests of leaders to Department of Labor Union elections are regulated by government Union leaders have fiduciary responsibility to use union money and property for the membership, not for own personal gain

12 New Proposed Legislation Employee Free Choice Act (EFCA) - Amend the Wagner Act (NLRA) Change the currently existing procedure to require the NLRB to certify the union as the bargaining representative without directing an election if a majority of employees signed cards It would take away employers' present ability to decide whether to use only the card-check process or to hold a secret- ballot election The proposed legislation would also establish stricter penalties for employers who violate provisions of the NLRA when workers seek to form a union, and set in place new mediation and arbitration procedures for disputes

16 Union Avoidance Strategy Management tries to prevent its employees from joining a union, either by removing the incentive to unionize or by using hardball tactics Union Substitution Strategy Union Suppression Strategy

18 Union Organizing Union Solicitation: Union needs at least 30% of employees to sign authorization cards to show NLRB there is a significant interest in organizing Union web sites have organizing information Some companies have no-solicitation rules

20 Union Organizing Pre-election conduct: Management can: Make speeches as to why union not needed Employ a consultant Send personal letters to employees Show videos and other material portraying union negatively Summarize and communicate all the good things company has done for employees

21 Union Organizing Certification Election Supervised by NLRB If vote is against union, can’t hold another election for 12 months

22 Good Faith Bargaining Behavior Both parties meet and confer with each other at reasonable time and place Both parties negotiate over wages, hours and conditions of employment (mandatory topics) Both parties sign a written contract that formalizes their agreement Each party gives the other a 60-day notice of termination or modification of the labor agreement before it expires 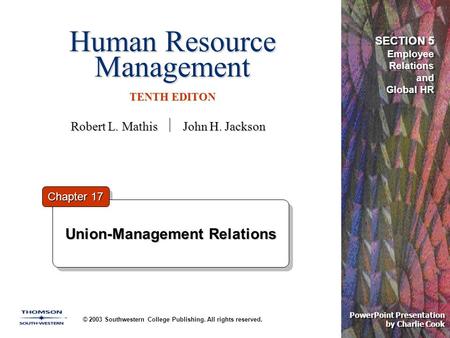 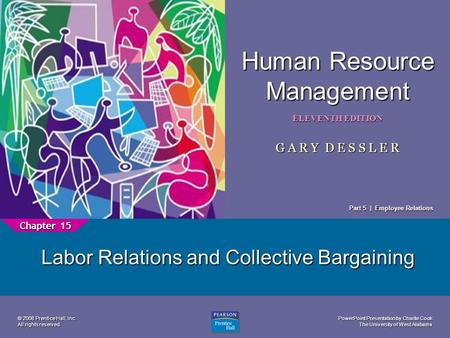 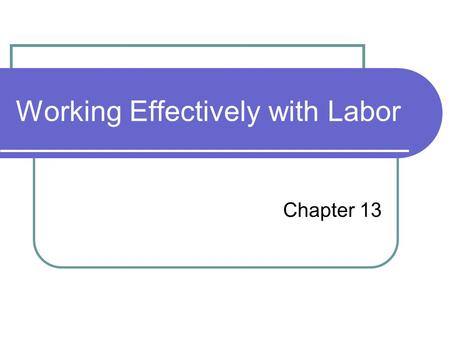 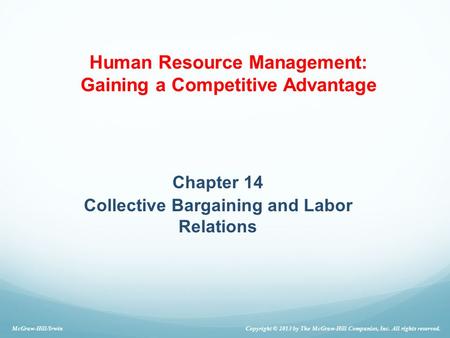 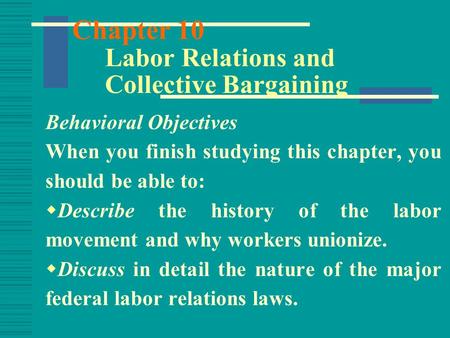 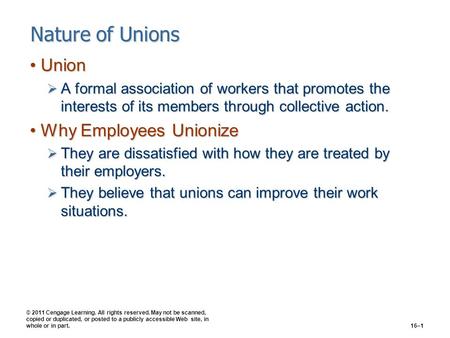 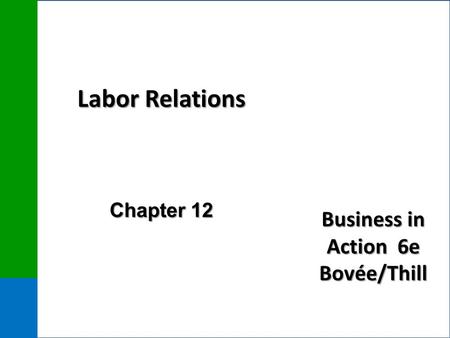 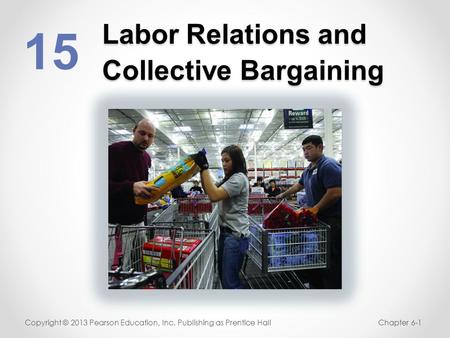 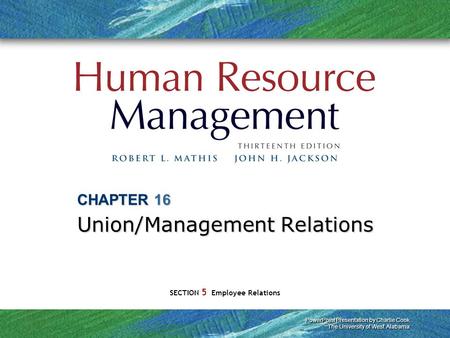 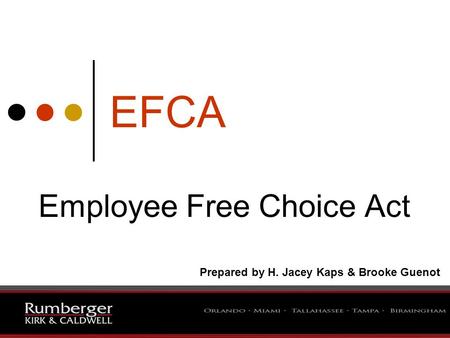 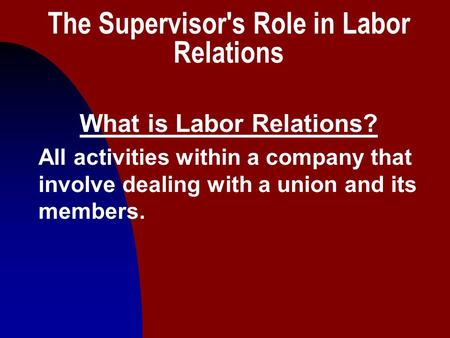 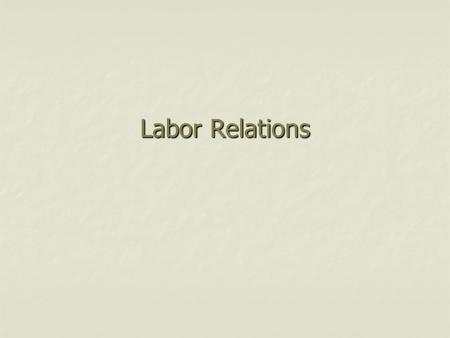 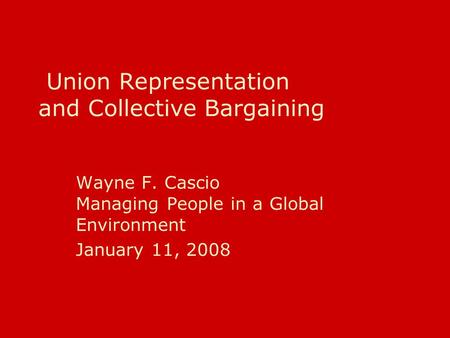 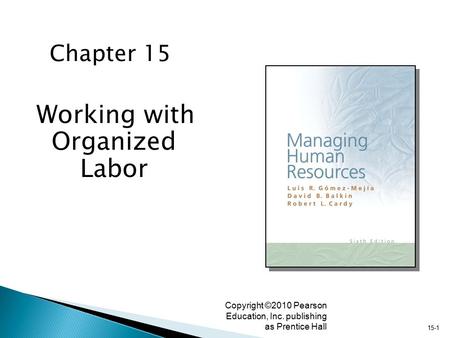 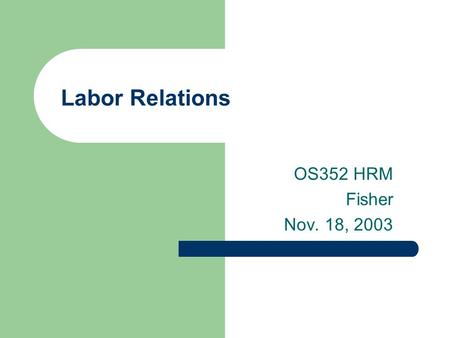