Presentation on theme: "A Comparison. Economy based on agriculture Most white southerners worked on small farms, but a few owned plantations and used slaves to grow crops like."— Presentation transcript:

2 Economy based on agriculture Most white southerners worked on small farms, but a few owned plantations and used slaves to grow crops like tobacco and rice Use of slaves decreased in 1790s because Europeans weren’t willing to pay for these crops Owners started selling slaves and even letting them go free

3 Growers thought cotton could make money, but it was too hard to separate the seeds from the fiber 1793: Eli Whitney invented the cotton gin that separated cotton fiber from its seeds By early 1800s, cotton was the South’s most important crop By 1860, cotton exports made more money than all other US exports combined Slavery grew as a result of the cotton gin—rising from 500,000 (1790) to > 3 million (1850) White southerners didn’t have any interest building factories

9 During the colonial era, Americans made everything by hand Beginning in the late 1700s, inventors started developing machines to make products more quickly and cheaply Shift from manufacturing by hand to manufacturing by machines is called the Industrial Revolution 1815—Francis Lowell builds first US textile factory— hires young farmwomen (“Lowell Girls”) More mills are built near rivers

10 By 1830s, steam engines are developed Factories don’t need to be built near rivers Eli Whitney introduces interchangeable parts, making manufacturing even cheaper Work is shifting from skilled craftspeople to less skilled laborers Not as many skills needed to operate a sewing machine Factory owners wanted a strong nat’l gov’t that could promote improvements in manufacturing, trade, and transportation 1831—reaper is invented, and allows for wheat to be harvested in much larger quantities 1860—Northern manufacturing 10x more valuable than Southern manufacturing

17 National (Cumberland) Road, built in 1811, was the first major road built by the gov’t 1816—Pres. Monroe vetoed a bill that would have given states money to build more roads, saying it was unconstitutional Cheaper way to travel was through rivers Steam engines solved the problem of going upstream Erie Canal was the first link between farms on the Central Plains and East Coast cities Clipper ships cut ocean travel time in half Steam-powered locomotives traveled faster than steamboats and could travel anywhere By 1860, more than 20,000 miles of rail linked northern factories

19 Rivers were used more commonly in the South Cotton was the most important product shipped by water Most cotton was shipped down the Mississippi, through N.O. to England or the North Most southern towns/cities sprang up along waterways because river travel was the main form of transportation Southerners opposed bills that would use federal funds to build internal improvements, because roads would probably be built in the North Some railroads in the South, but just 10,000 miles, compared to 20,000 in the North

Download ppt "A Comparison. Economy based on agriculture Most white southerners worked on small farms, but a few owned plantations and used slaves to grow crops like." 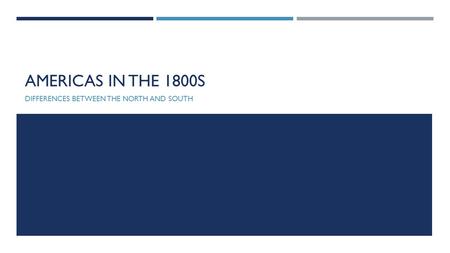