2 Beginning of time… First people were nomads in Africa
Breakthrough: farming allowed people to stay in one place rather than follow herds for food. This led to a rise in populations and interaction among tribes Farming leads to whats known as the Neolithic Period of time, about 10,000 years ago. Farming also leads to new inventions and tools that help people be successful at farming. At the same time people start to tame animals and use them for labor on farms and for meat without having to follow herds, making life easier. This also led to the creation of social structures and village chiefs who were in charge of tribes. Warred with each other for food. Women begin to lose status because cannot fight in wars.

3 Civilizations emerge Civilizations raised extra food for surplus and encourage people to specialize in their job. They developed governments to lead large tasks and social class systems. They also developed writing. People begin to search for water since it will lead them to fertile fields they can use for farming. Extra food helps populations expand and leads to cities. Within cities people begin to specialize in things other than farming, which is a radical change from before and the basis for our modern economy. Governments are created to oversee things like building irrigation systems, canals, etc. These grow more complex as time goes on. Social classes also emerge: priests at top, then wealthy merchants, then craft workers, then peasants, then slaves. Writing is developed to record amount of grain from fields. Not everyone learns to read and write. People migrate out of Africa and across world in search of water, soil, etc.

4 Bantu migrations Sahara was once full of water and provided a way of life for people When it turns to desert, people move south and east. These are called Bantu migrations because the language used came from the Bantu family. Today about 1/3 of Africans speak a language from this group. This allows for a diversity in cultures of Africa as well, since when they separate they develop their own culture but still use a similar language.

5 Kingdoms of West Africa
Trade networks link farming communities to the forest, send goods across the desert. Camels are brought from Asia which allowed for greater mobility. Gold and salt become the most commonly traded item in Africa. Religions spread this way. Farming expands and goods are sent across large areas in exchange for different foods or other items needed. In 200CE camels are brought from Asia, changes trade in Africa. Camels survive for long times with little water and are able to carry large loads, making trade easier as the Sahara grows hotter. Gold and salt are traded, gold is traded with Europeans when they arrive in the 1500s, salt is used to maintain a healthy diet in hot tropical areas.

6 Kingdom of Ghana Controlled salt-gold trade across West Africa
“Land of gold”. Islam is established and spread in region. Influenced by Muslim art, technology, and philosophy. Ghana gains LOTS of wealthy from gold and salt trade, uses wealth to expand empire in order to control more trade routes. Ghana is first of many large trade empires in area. Highest power was between Many described king of Ghana as one of the wealthiest on earth. The king called himself Ghana which means warrior king, and people mistaken that for the country so the country is called Ghana and remains so today. No gold in Ghana empire, all came from trade routes from other areas. Traded with other groups who needed salt in order to survive. King had absolute power. Ibn Battuta said Ghana was very safe and never feared for his life.

7 Decline of Ghana Berbers from N. Africa attack trade routes.
They destroy the capital then leave, and Ghana was left vulnerable. Eventually become part of new empire: Mali Image of salt trade. Eventually all wealth and power accumulated by this kingdom goes to Mali. War took over a decade to incorporate Ghana into Mali.

8 Kingdom of Mali Took over gold mining and salt supplies of Sahara.
Empire rose to nearly double the size of Ghana’s. Changed Africa by spreading its language, culture, and laws across Sahara. Get wealth from Ghana. Kingdom arose from several smaller areas uniting together along Niger River. Area had forests and savannahs which provided fertile land for farming and raising livestock. Many ethnic groups still living in this area trace lineage back to original inhabitants. Army was one of the largest in the world. Common weapons were poisoned arrows and spears, and swords.

9 Mansa Musa Musa was the most powerful emperor of the Mali Kingdom.
Converted to Islam and journeyed to Mecca Impressed by the Muslim empire, he brought scholars back to help Mali rise to power. Mansa takes pilgrimage to Mecca as part of Hajj, or required journey. Takes with him 60,000 people to help him travel: doctors, friends, slaves, 100 camels. He brought so much gold with him that it changed the value of the currency in other countries for a decade, causing the value of currency to go down. Many people were impressed with wealth of African kingdom, and it became recognized as a great empire. Created trade centers, government systems, and brought Arabic to the people. Recently named richest person ever to live (more than Bill Gates, Warren Buffet, etc.).

10 Decline of Mali Kings after Mansa Musa were unable to protect territory, not as powerful. Tribes began attacking empire from all sides. Eventually Mali is broken up into various smaller kingdoms. At this time the neighboring empire, Songhai, tried to start attacking and take over area. Songhai wanted trade routes that the empire had controlled and large cities in the area which were a center for learning and trade. Kings after Mansa Musa tried to live as extravagantly as he did but they were unable to maintain the wealth needed. Eventually they were forced to allow empire to break up.

11 Kingdom of Songhai Took over some of Mali’s territory
Largest empire in western Africa Controlled trade routes and wealthy cities Strong central government, Muslim empire, and strict social classes. Muslims become a powerful force, and Islam becomes official religion of empire. King made a strong central government and distributed powers to those underneath him. The empire developed a strong navy for protecting areas and controlling river. They also used this to tax anyone who wanted to use the river too. Social class system is similar to caste in that very strict and not able to leave caste. Slaves and war captives at the bottom are forced to work on farms. Leaders encouraged education and built universities for people to study at.

12 Decline of Songhai Many leaders began to fight for control of empire.
Civil war weakened the empire. Taken over by invasion from Morocco. Leaders at end of empire start to declare independence and try to form own state because jealous of power of other rulers. King is not able to reign them all in and control them all so empire starts to fall. Fighting causes army to be busy protecting own empire and eventually shrinks because many die. This leaves empire weak. Morocco sees this and takes advantage of it. Morocco is seeking to increase profits from trade. Moroccans are not successful in taking over area and lose money so leave but Songhai is gone.

13 East Africa East Africa was important because it linked Europe, Africa, and India. Trade cities grew along coast as Europeans demand items from Asia and Africa. Crucial part of Arab trade routes. Area had been Christian but eventually converts to Muslim. Image of traditional building from this era. Muslim traders set up posts and are protected by Africa tribes who gain wealth from this. Increases trade and allows items to come from Asia such as porcelain and silk and spices into Europe. Many areas in east Africa were impacted by trade and became multicultural centers with various religions and ethnic groups carving own areas out of city.

14 Trade became crucial as many empires relied on it for wealth and expansion.
Europeans would eventually become frustrated with the high costs of trade routes established in Asia and Africa. They sought to find alternate routes to the source of spices, gold, and other items. 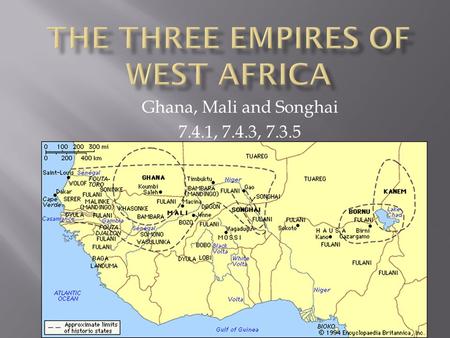 The Three Empires of West Africa 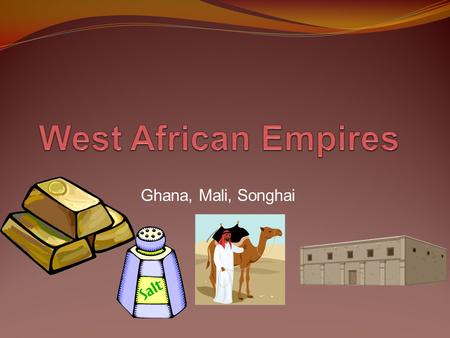 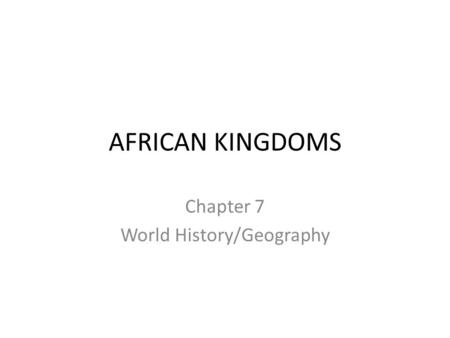 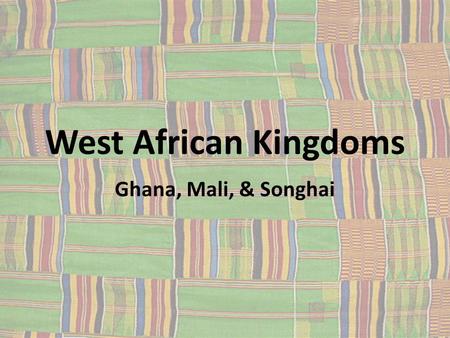 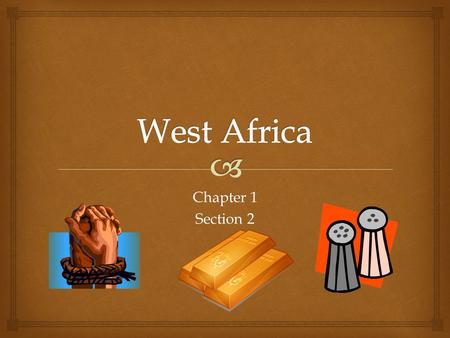 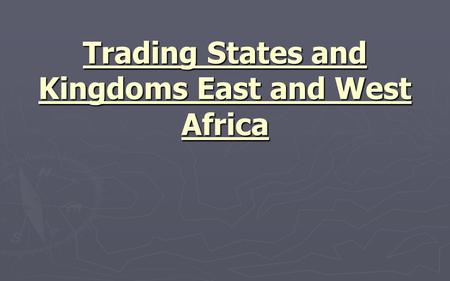 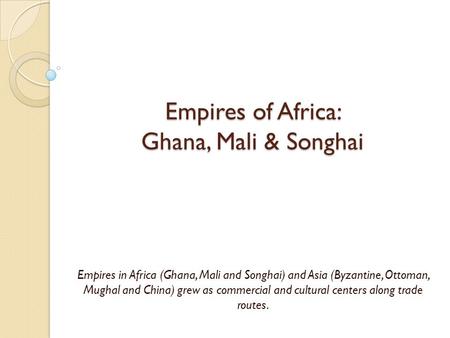 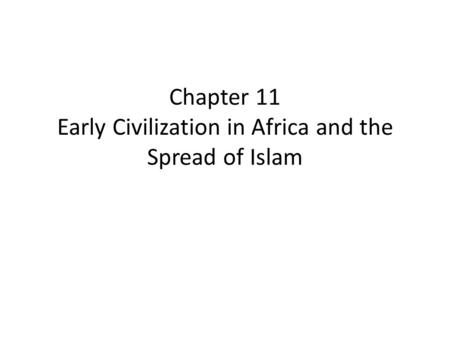 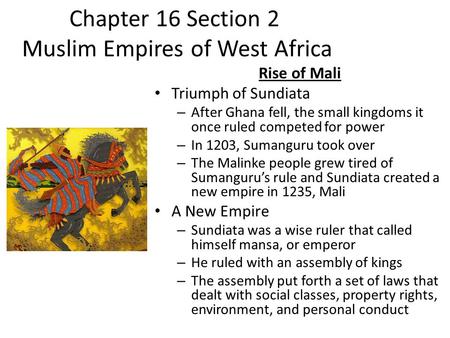 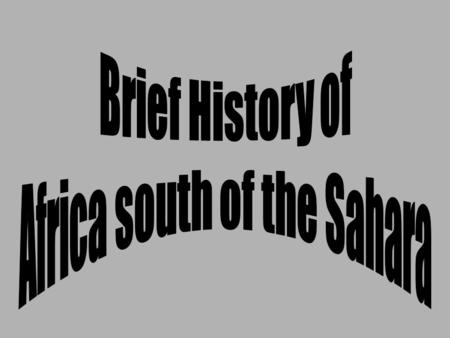 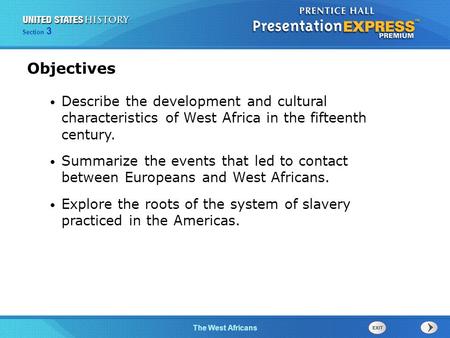 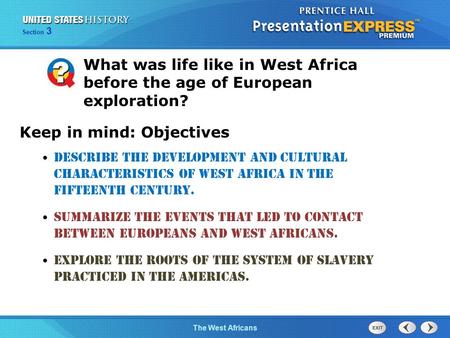 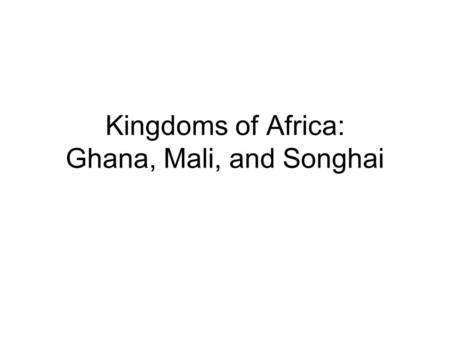 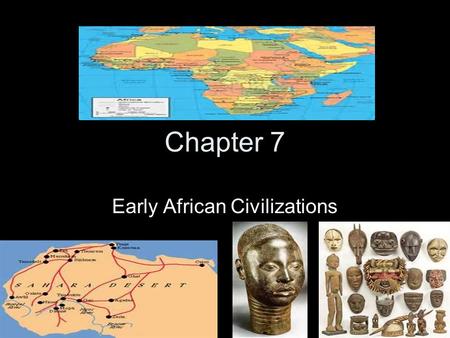 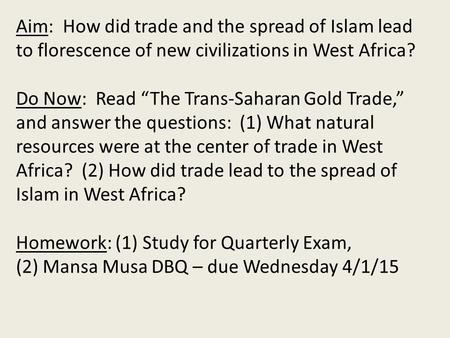 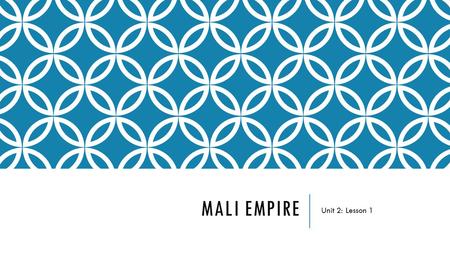 MALI EMPIRE Unit 2: Lesson 1. DO NOW: What does this image make you think about African empires? Unit 2: Mali Empire: Lesson 1. 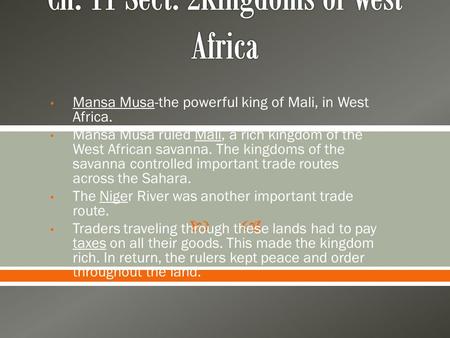