Presentation on theme: "Feminism LO: To assess the feminist perspectives of the family. (Radical, Liberal and Marxist)."— Presentation transcript:

1 Feminism LO: To assess the feminist perspectives of the family. (Radical, Liberal and Marxist).

3 Liberal Feminism Use your knowledge of the domestic divisions of labour and family types to write an explanation of the liberal feminist view of the family. You should use the following: Young and Willmott March of Progress Future Foundations (2002) Silver (1987) Schor (1993) Pahl & Vogler Equal Pay Act (1963) Sex Discrimination Act (1975)

4 Marxist Feminists Women reproduce the workforce! Women have a ‘triple-work’ shift. “Women are the takers of shit” - Ansley (1972)

5 Women can provide a cheap and effective workforce when required. Women are a reserve army of labour.

6 It’s a woman’s job to comfort the hard working man! What will my hard-working husband want for tea?

7 Always remember... Marxist Feminism is Marxist! Their ideas are based upon class conflict and the role that women play in society, not about male dominated societies. (Although they do agree that society is patriarchal)

8 Radical Feminists Society is patriarchal! Men oppress women and exploit them. Many radical feminists believe in ‘political lesbianism’ – not to trust any men. Heterosexual relationships are ‘sleeping with the enemy’ and the only way to stop the patriarchal society is to live independently.

9 The Family – Radical Feminist The Nuclear Family supports the patriarchal society. Men are head of the household (this is reflected in society). The family benefits men through: free domestic labour, emotional work & sex! When are controlled in the family through domestic violence.

11 Criticisms of feminists theories! Women’s roles are not the same in all families. (House husbands, extended families, cohabitation) Women do have choices. Some women enjoy becoming housewives or pursuing a career – they have a choice. More women have independent incomes. 70% of divorces are initiated by women, showing that they can leave ‘oppressive’ relationships.

12 Criticisms continued... Children have more status in families and are becoming Child Centred. It is not solely down to women to socialised children. Somerville (2000) – women’s position in society have greatly improved! (Symmetrical family, Equal Pay Act (1963), Sexual Discrimination Act (1975), increase in divorce rates, protection for women).

13 Fill in your next section on your A3 sheet. The sub-heading should be Feminism. Ensure you include Marxist and Radical together – conflict theories.

Download ppt "Feminism LO: To assess the feminist perspectives of the family. (Radical, Liberal and Marxist)." 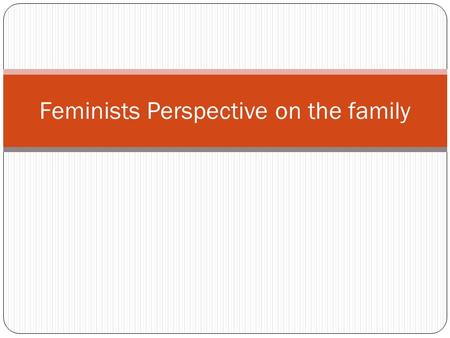 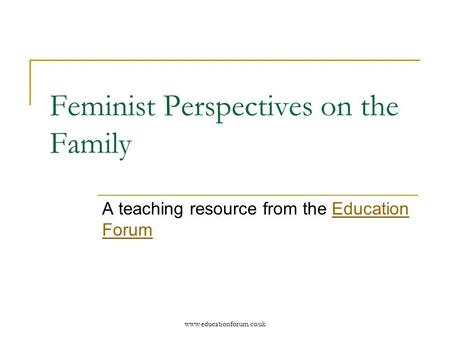