2 Roots of Confucianism Confucius was born in 551 B.C. He was out of wedlock, poor as a child, and shunned by others. This background motivated him to get a good education and try to make something of himself.

3 Roots of Confucianism When he got older Confucius wandered from court to court talking to rulers about how to govern. Unable to find a job as an advisor, he became a teacher.

4 Roots of Confucianism Confucius was not interested in religion and developed a philosophy about how to ensure social order and good government. He never wrote any of his ideas down. But after he died, his students collected his sayings in a book titled The Analects.

5 Teachings of Confucianism: Five Key Relationships Five Relationships: Harmony in society is possible when people accept their place in society. Key relationships include father to son, older brother to young brother, husband to wife, ruler to subject, and friend to friend. Except for friendship, none of these relationships is equal.

6 Teachings of Confucianism Superiors should care for their inferiors and set a good example, and inferiors owed loyalty and obedience to their superiors. Correct behavior would bring order and stability.

7 Teachings of Confucianism Confucius put filial piety or respect for parents above all other duties.

8 Teachings of Confucianism: Government A ruler was expected to provide good government for the people and lead by good example. In turn people would be respectful and loyal.

9 Spread of Confucianism As Chinese civilization spread, hundreds of millions of people in Korea, Japan, and Vietnam were influenced by Confucian beliefs.

10 Legalism Legalism was a belief system founded by a man named Hanfeizi. He said that people, by nature are greedy and evil. He said that since people were naturally this way, they needed a strong government with strict laws and harsh penalties.

11 Legalism Legalism was used by Chinese emperors who wanted to keep order. Sometimes laws were so cruel, later generations of people hated Legalism.

12 Daoism Another belief system that started in China was Daoism. It was founded by Laozi, who lived at the same time as Confucius. People who followed Daoism wanted to live in harmony with nature.

13 Daoism Daoists rejected conflict and stressed that giving in and compromising brought stability and happiness. Daoists thought that the best government was one that ruled the least. 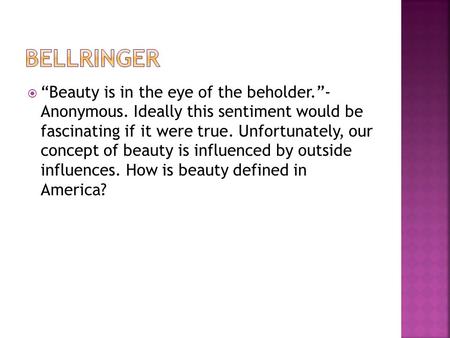  “Beauty is in the eye of the beholder.”- Anonymous. Ideally this sentiment would be fascinating if it were true. Unfortunately, our concept of beauty.