Presentation on theme: "SCIENTIFIC METHOD  A step by step process that scientists use to solve problems."— Presentation transcript:

3 STEP 1  State the Problem or Question  What is it you want to know?  For Example: Why are there worms on the sidewalk after it rains?

4 STEP 1 a  Research or gather information – if someone already solved it, why do the work?

5 STEP 2  Form a Testable Hypothesis  Propose a solution to the problem based on available information  this is an educated guess or an inference  For Example: If rain turns into worms, then that’s why worms are on the sidewalk after the rain.

6 Scientific Theory  A well tested explanation of something that occurs  a wide range of observations or experimental results goes into a theory  This is NOT a fact. It has just not been proven wrong. There is still the possibility it could be.  Examples: Evolution, Relativity

7 Scientific law  A rule describing a consistent pattern in Nature. It happens every time, all the time.  Examples: Gravity, Thermodynamics, Motion

8 STEP 3  Design an Experiment  experiments are used to prove (or disprove) a hypothesis  experiments must be done and explained in a way that they may be repeated!!

12 STEP 5  Draw Conclusions  What are the results telling you?  Does the data support the hypothesis?

Download ppt "SCIENTIFIC METHOD  A step by step process that scientists use to solve problems." 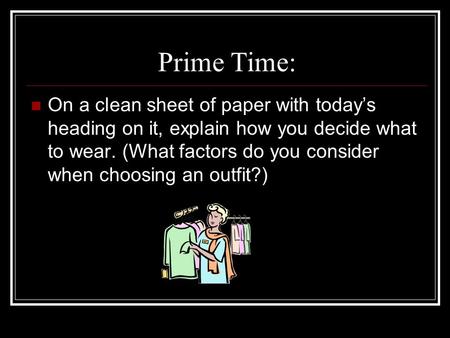 Prime Time: On a clean sheet of paper with today’s heading on it, explain how you decide what to wear. (What factors do you consider when choosing an outfit?) 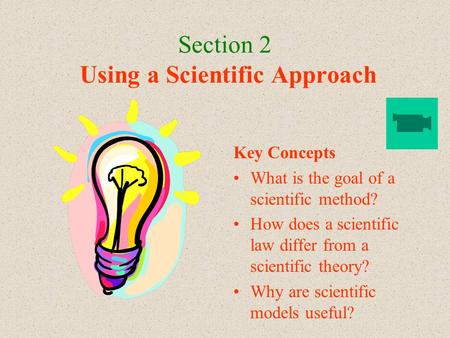