2 Bellringer Why do you think it is necessary to have a process for naming candidates for office? How does the fact that we have a two-party system increase the importance of a nomination?

3 I. The Nominating Process

4 Nominating Candidates
Only 2 people run in the general election. How do they get there? Nomination – the naming of those who will seek office General Election – first Tuesday in November on even years (Constitution)

5 5 Methods of Nomination Primary – (semifinals) – elections, winner goes on to the general election – many different ways Caucus – group of like-minded people who meet to select a candidate – party only Convention – local party picks states delegates – then pick national – then pick candidate Self-Announcement – person announces they are running – third party/independent Petition – a required number of signatures required – then on the ballot Higher the office – more signatures

9 Evaluations of the Primary
Primary helped get away from Boss dominated and party organization Put power in hands of everyday people.

12 The Administration of Elections
Federal law says Congress picks when President and Congress run – it is the first Tuesday in Nov on even years States usually have it the same day – but don’t have to Absentee voting – a process by which people could vote without going to their polling places on election day. Coattail effect – when a strong candidate running for a high office attracts voters and helps lower candidate win also – but not (can hurt)

17 Regulate Finance of Elections
Federal Election Commission – they watch over elections – auditors – nonpartisan under the President – understaffed and underfunded Watch and enforce Disclosure requirements, limits on contributions and PAC contributions, Limits on Expenditures, and Give public funding for presidential campaigns

19 PAC’s Political Action Committee
Law says that corporations or labor unions can give money to campaigns – their PAC’s can. Only raise funds from members Two types – business and ideological $5,000 per candidate per election – no limit of Candidates though Can have own TV commercials 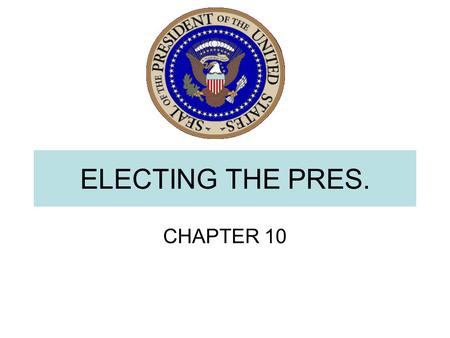