4 123 Go To Section: A Critical First Step Chapter 7, Section 1 2222 3333 In the United States, the election process occurs in two steps: 1. Nomination, in which the field of candidates is narrowed 2. General election, the regularly scheduled election where voters make the final choice of officeholder

7 123 Go To Section: Chapter 7, Section 1 2222 3333 The Direct Primary Nonpartisan Primary Candidates are not identified by party labels Runoff Primary If a required majority is not met, the two people with the most votes run again Closed Primary Only declared party members can vote. Types of Direct Primaries Open Primary Any qualified voter can take part. Blanket Primary Qualified voters can vote for any candidate, regardless of party

9 123 Go To Section: Petition Candidates must gather a required number of voters’ signatures to get on the ballot by means of petition. Minor party and independent candidates are usually required by State law to be nominated by petition. Petition is often used at the local level to nominate for school posts and municipal offices. Chapter 7, Section 1 2222 3333

10 123 Go To Section: Section 1 Review 1. The most commonly used method of nomination today is (a) the caucus. (b) the direct primary. (c) self-announcement. (d) the convention. 2. A runoff primary is held in some States when (a) no one wins a majority of votes. (b) there is only one candidate. (c) not enough voters turn out on election day. (d) a candidate asks for a recount. Chapter 7, Section 1 Want to connect to the Magruder’s link for this chapter? Click Here!Click Here! 2222 3333

12 123 Go To Section: Chapter 7, Section 2 3333 1111 The Administration of Elections Congress has the power to set the time, place, and manner of congressional and presidential elections. Congress has chosen the first Tuesday after the first Monday in November of every even-numbered year for congressional elections, with the presidential election being held the same day every fourth year. States determine the details of the election of thousands of State and local officials. Most States provide for absentee voting, for voters who are unable to get to their regular polling places on election day. Some States within the last few years have started to allow voting a few days before election day to increase voter participation. Elections are primarily regulated by State law, but there are some overreaching federal regulations.

13 123 Go To Section: Precincts and Polling Places Precincts A precinct is a voting district. Precincts are the smallest geographic units used to carry out elections. A precinct election board supervises the voting process in each precinct. Chapter 7, Section 2 3333 1111 Polling Places A polling place is where the voters who live in a precinct go to vote. It is located in or near each precinct. Polling places are supposed to be located conveniently for voters.

14 123 Go To Section: Casting the Ballot Voting was initially done orally. It was considered “manly” to speak out your vote without fear of reprisal. Paper ballots began to be used in the mid-1800s. At first, people provided their own ballots. Then, political machines began to take advantage of the flexibility of the process to intimidate, buy, or manufacture votes. In the late 1800s, ballot reforms cleaned up ballot fraud by supplying standardized, accurate ballots and mandating that voting be secret. Chapter 7, Section 2 3333 1111 History of the Ballot

16 123 Go To Section: Voting Machines and Innovations Chapter 7, Section 2 3333 1111 Electronic vote counting has been in use since the 1960s. Punch-card ballots are often used to cast votes. Vote-by-mail elections have come into use in recent years. Online voting is a trend that may be encountered in the near future.

21 123 Go To Section: Why do people give? On your notes paper (or if you are not taking notes, get out a sheet of paper) list at least 3 reasons people donate to campaigns They believe in a party or candidate They want something in return Appointment to public office or keep the appointment they have Public recognition Dinner at the White House They want access to government Influence policy, get laws passed, changed or repealed

22 123 Go To Section: Regulating Campaign Financing Chapter 7, Section 3 2222 1111 Early campaign regulations were created in 1907, but feebly enforced. Illegal for corporation or national bank to contribute to any candidate running for a federal office The Federal Election Campaign Act (FECA) of 1971 was passed to replace the former, ineffective legislation.

25 123 Go To Section: The FEC regulates PACs PAC – Political Action Committees help candidates sympathetic to their cause Corporations and Labor unions cannot donate to candidates running for federal office. –“Segregated fund committees" are political arms of special interest groups. They can only raise money from their members. Unconnected Committees are independent organizations –They can raise money from the public Can donate up to $10,000 to any one candidate in an election cycle (primary and general elections) $15,000 to any political party in a year

26 123 Go To Section: Super PAC Super PACs are a new kind of political action committee created in July 2010 Technically known as independent expenditure-only committees, Super PACs may raise unlimited sums of money from corporations, unions, associations and individuals, then spend unlimited sums to overtly advocate for or against political candidates. Super PACs must, however, report their donors to the Federal Election Commission on a monthly or quarterly basis -- the Super PAC's choice -- as a traditional PAC would. Unlike traditional PACs, Super PACs are prohibited from donating money directly to political candidates.

27 123 Go To Section: Loopholes in the Law “More loophole than law…” —Lyndon Johnson Soft money—money given to State and local party organizations for “party-building activities” that is filtered to presidential or congressional campaigns. $500 million was given to campaigns in this way in 2000. Independent campaign spending—a person unrelated and unconnected to a candidate or party can spend as much money as they want to benefit or work against candidates. Issue ads—take a stand on certain issues in order to criticize or support a certain candidate without actually mentioning that person’s name. Chapter 7, Section 3 2222 1111

28 123 Go To Section: Section 3 Review 1.Sources of campaign funding include (a) nonparty groups, such as political action committees. (b) government subsidies. (c) candidates’ personal funds. (d) all of the above. 2. Chapter 7, Section 3 Want to connect to the Magruder’s link for this section? Click Here!Click Here! 2222 1111 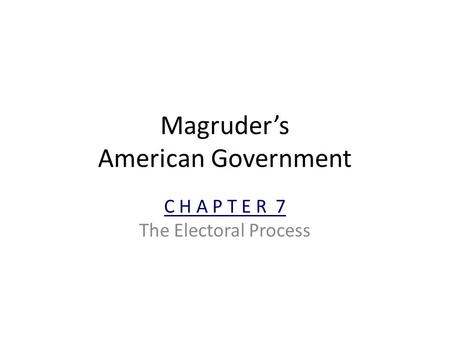