1 THE AGE OF EXPLORATION

2 Art & Architecture before & after the Crusades

5 A Market for Goods Venice and Genoa, cities in Italy, controlled the trade coming into Europe from Asia. They bought the goods cheap, then resold them to the rest of Europe at a higher price.

6 Portugal, Spain, France, and England resented the huge profits made by Venice and Genoa, Italy.
Since Italy controlled the trade routes through the Mediterranean Sea, They looked for another way to India, China, and the Spice Islands.

8 Bartolomeu Dias Portuguese explorer who explored Africa's coast. In 1488, Dias led the first European expedition to sail around Africa's Cape of Good Hope. This breakthrough opened up trading routes from Europe to Asia.

9 Christopher Columbus 1451-1506
Italian explorer who sailed across the Atlantic Ocean in 1492, hoping to find a route to India. On his 1st trip, Columbus found the Bahamas, which he thought was the West Indies. He never realized it was a new continent.

10 Vasco da Gama Portuguese explorer who discovered an ocean route from Portugal to the East. Da Gama sailed from Lisbon, Portugal, around Africa's Cape of Good Hope, to India (and back) in At that time, many people thought that this was impossible to do because it was assumed that the Indian Ocean was not connected to any other seas.

11 CRCT Test Prep p 400. Why did Prince Henry the Navigator (PHN) want to send ships south to Africa? He wanted a route around Africa to the Asian markets 401. Which religion did PHN hope to spread? Christianity 402. Which Italian cities dominated the trade routes from Asia to Europe for a long time? Genoa and Venice 403. Which result of the Crusades to the Holy Land helped Europeans become explorers? Europeans’ mapmaking skills improved 404. Which islands did Columbus believe were part of Asia (West Indies)? Bahamas

12 Summary How did religion, natural resources, a market for goods, and Prince Henry the Navigator cause European exploration and colonization? Answer on your paper, then discuss your answer with a partner. 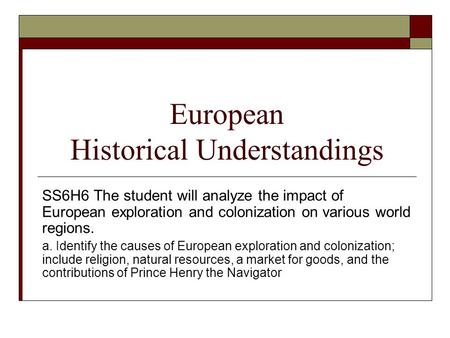 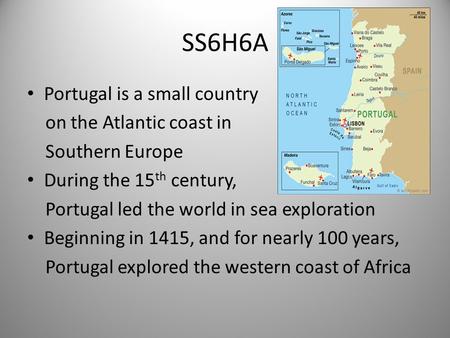