2 Introduction Music has been a part of culture for thousands of years. It has evolved over time to have a variety of sounds and uses. People who study music have divided history into SIX general time periods of music. Each time period has certain characteristics and composers that help define their era.

4 Medieval (500-1400) Most medieval music was vocal.
Any instrumental music was usually folk-like and social The church was an important place for musicians

7 Rebirth and Re-discovery
Art and music become more important in society Renaissance fairs are held today, and are a spectacle of art, music, and theatre. Time of Christopher Columbus, Leonardo da Vinci, and Shakespeare

8 Giovanni da Palestrina (1525-1594)
Italian composer of sacred music He greatly influenced the music of the Catholic Church. (He wrote over 100 masses!) One of the first well-known composers of polyphonic music (music with harmonies)

11 Baroque Characteristics
The Baroque period was a time of extravagance in all forms. Art, music, and architecture reflect a new sense of drama and excess. Instrumental music becomes more important. Music in general continues to be more expressive, less tied to religion.

12 Johann Sebastian Bach (1685-1750)
Born in Germany to a musical family Played many instruments, but was considered a virtuoso on the organ Church musician throughout his life. Composed an enormous amount of music for the church. Had 20 children!

13 Toccata and Fugue in D Minor
Written by Bach for his most beloved instrument A toccata is a composition written for a keyboard instrument composed in a ‘free style’ (no set structure). A fugue is a very structured piece that repeats one particular theme/melody many times throughout, harmonized with different melodies.

14 George F. Handel ( ) Originally studied law because his father did not approve of his son becoming a full-time musician. Lived in Germany, Italy, and England at different times in his life and composed in German, Italian, and English

15 Hallelujah Chorus from Messiah
Part of an oratorio (a musical work written for chorus, vocal soloists, and orchestra). Often with a religious text. Most often performed during the Christmas season. King George II stood upon hearing its magnificence; many audiences still stand today. 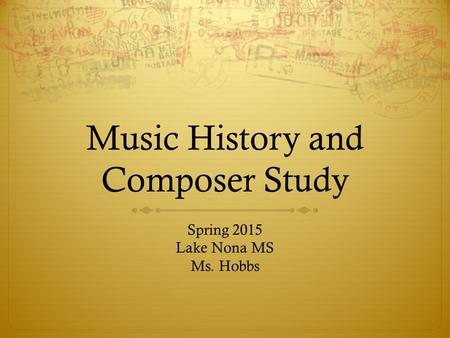