1 Music of the Baroque Period
An in-depth look at the music that revolutionized mankind’s appreciation of music.

2 Connections to other arts
The music of the time can be compared to the visual art of the time. Descriptors: excess, ornamentation, contrasts, tensions, and energy. Music was used in the new dance form ballet.

3 Johan Sebastian Bach (1685 – 1750)
Known as JS Bach, as many other “Bachs” existed. Originally known for playing the organ, not his compositions. Reflects the complexity of the Baroque period. Intelligent music that is technically challenging. Wrote for choir, keyboard and orchestra He is remembered for his cantatas.

4 Bach’s Works clearly reflects the Baroque characteristic of making things complex. Bach wrote for the harpsichord and the organ (the piano was not yet widely in use).

5 Cantata A musical work that consists of several pieces of music that are related to each other by their texts. Written for choir, with soloists, and instrumental accompaniment. Took around 25 minutes to perform, sacred or secular text, written and sung in German. Use of the fugue is found in many of the choral movements. Bach wrote one for every Sunday while working for the Protestant church, and an additional one for ever major church holiday.

6 Characteristics of a fugue:
Main musical idea (melody) introduced in one voice, called the subject. (voice in choir, instrumental section, part of the keyboard) After the first voice performs the “subject” it enters its own melody, and the second voice begins the original melody. This continues through 4 voices. Eventually, all voices interact with one another until the end of the piece, where all the voices stop on a cadence (final chord).

7 Bach’s Most Famous Work:
The Well Tempered Clavier, Book 1 and 2 Each book contains 24 pieces, each consisting of a prelude and a fugue. prelude: introduction (pre / ludere) player demonstrates skill fugue: music on which one must think and interpret.

8 George Frideric Handel (1685 – 1759)
Born in Germany as well, but moved abroad to study in Italy. Eventually settled in England and became known as a composer of operas and oratorios.

9 More about Handel… Unlike Bach, Handel was known for his compositions, and was frequently asked to write music for public occasions, such as fireworks displays. His most famous Oratorio is The Messiah.

10 What’s an Oratorio? Similar to a cantata:
They are both extended works for choir and soloist with instrumental accompaniment that are performed without scenery and costumes. Sung in the language of the people, German or possibly English.

11 Differences between a Cantata and an Oratorio…
Oratorio is much longer than a cantata Oratorio usually tells a religious story Not performed as part of the church service It is a sacred story or subject using poetic text but NOT text from the Bible Follow typical plot construction of: exposition, conflict climax, and resolution

12 Handel’s Most Famous Work:
Messiah an Oratorio The first Section, The Messiah is widely performed at Christmas each year. Most famous section is The Hallelujah Chorus

13 The music of Bach and Handel reflects the characteristics of the Baroque age in many ways
the Catholic Church was no longer the dominant religion in every European country In Germany, Bach wrote cantatas for the Lutheran church service In England oratorios were performed as special music concerts as an alternative to opera The music of Bach and Handel shows greater changes in dynamics and tone color to express a greater range of emotions.

16 Lully’s Secular Music Lully's music is known for its power, liveliness in its fast movements and its deep emotional character in its sad movements. Lully created French-style opera as a musical genre: tragédie en musique or tragédie lyrique

17 Lully’s Sacred Music Lully's grand motets were written for the royal chapel, usually for vespers or for the king's daily low mass. Lully did not invent the genre, he built upon it. Grand motets often were psalm settings

18 Final Thoughts: Their music explored only one emotion for an entire piece of music. The use of the fugue demonstrates the tendency toward anything elaborate and ornate. 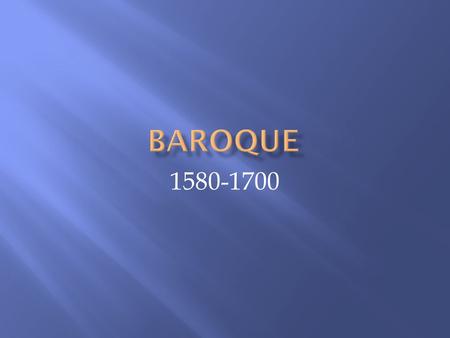