2 ROMAN RELIGION Augustus revived traditional Roman religious festivals and ceremonies to bring back the Roman state religion. It focused on the worship of a number of gods and goddesses – including Jupiter, Juno, Minerva, and Mars – based on the Greek Olympian deities. Beginning with Augustus, emperors often were declared gods. Romans believed that observing proper rituals brought them into a right relationship with gods, guaranteeing them the God’s favor.

3 ROMAN RELIGION (DISCUSSION QUESTION)
What are the Greek originals of the Roman deities Jupiter, Juno, Minerva, and Mars?

4 THE JEWISH BACKGROUND AND THE RISE OF CHRISTIANITY
By A.D. 6, Judaea, which covered the lands of the ancient kingdom of Judah, was a Roman province under the direction of a procurator. Unrest was common in Judaea, even among factions of Jews. Among the Jews, the Sadducees counseled cooperating with the Romans. The Pharisess promoted close observance of religious law to protect Jewish identity from Roman influences. The Essenes awaited God to save Israel from oppression. The Zealots advocated overthrowing Roman rule. A revolt begun in 66 was crushed by the Romans, who destroyed the temple in Jerusalem.

5 Roman Religion Jesus, a Jew, began to preach in the midst of this conflict. Jesus taught that inner transformation was most important, not adhering to laws or rituals. He commanded that we love God and love each other, treating all as our neighbors. Jesus taught the virtues that would later shape the value system of Western civilization: humility, charity, and love of others. Jesus’ opponents turned Jesus over to the Roman authorities because they thought he might cause people to revolt against Rome. The procurator, Pontius Pilate, ordered his crucifiixion. Followers of Jesus believed he overcame death, however. Many Jewish followers believed he was the Messiah who had come to save Israel.

7 Simon Peter Simon Peter was a prominent figure in early Christianity. Another prominent leader was Paul. Paul took the message of Jesus to both Jews and non-Jews, or Gentiles. He founded many Christian communities in Asia Minor and along the Aegean Sea. Paul taught that Jesus was the Savior and Son of God who had come to Earth to save all people. Jesus’ death would make up for people’s sins and offer them salvation.

9 Roman Religion Paul wrote letters (epistles) to Christian communities and other disciples may have written down Jesus’ saying. Between A.D. 40 and 100, these became the basis of the written Gospels (“the good news”). The Gospels tell of Jesus’ life and teachings, and they form the basis of the New Testament, the second part of the Christian Bible. Christianity’s basic values differed from Greco-Roman values. At first the Romans ignored the spread of Christianity. That attitude changed. The Romans came to see Christianity as harmful to public order and morals because Christians did not worship Roman Gods. This was an act of treason.

10 Roman Religion Roman persecution of Christians began under Nero’s reign (A.D ). He blamed Christians for the fire that burned much of Rome. He subjected them to cruel deaths.

12 The Triumph of Christianity
Roman persecution strengthened Christianity by forcing it to becoming more organized. The emerging control over Christianity communites by bishops was important to this change. The Christian Church was creating a distinction between the clergy(church leaders) and the laity (everyday church members).

13 The Triumph of Christanity
For a number of reasons, Christianity grew steadily. First, it was more personal than the Roman religion and offered eternal life and salvation. Second, it was familiar because it was like other religions that offered immortality through the sacrificial death of a savior-god. Third, it fulfilled the human need to belong. Christian formed communities based on love and care. Christianity was especially attractive to the poor and powerless. Everyone, regardless of status, could gain salvation and all were equal in the eyes of God.

14 The Triumph of Christianity
Emperors in the third century began new waves of persecution, ending with the great persecution by Diocletian at the beginning of the forth century. Christianity was too strong for force to destroy it, however. Christianity prospered in the fourth century. Constantine became the first Christian emperor. In 313 his Edict of Milan officially sanctioned tolerated Christianity. Under Theodosius the Great, the Roman adopted Christianity as their official religion.

15 Review Why do you think the Romans eventually decreed Christianity their official religion? 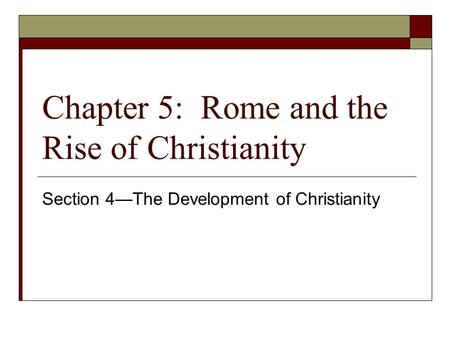 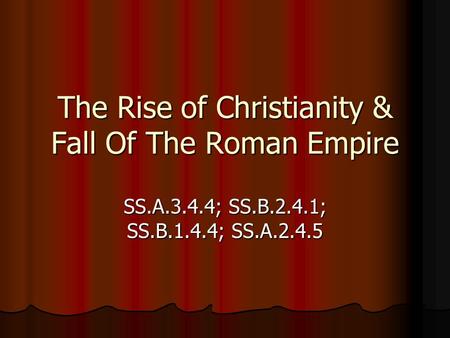 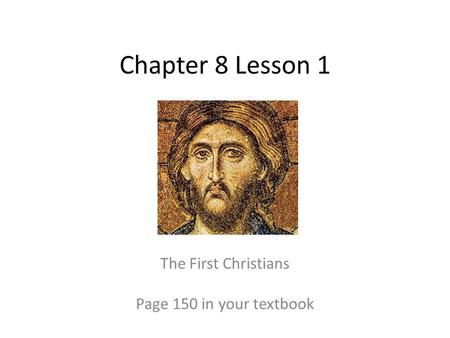 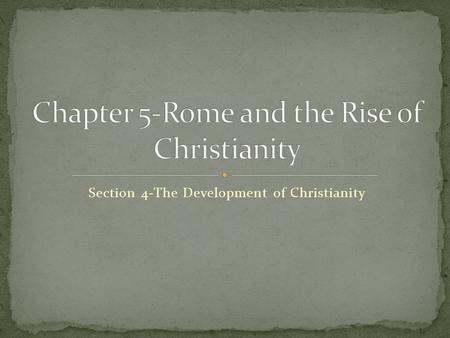 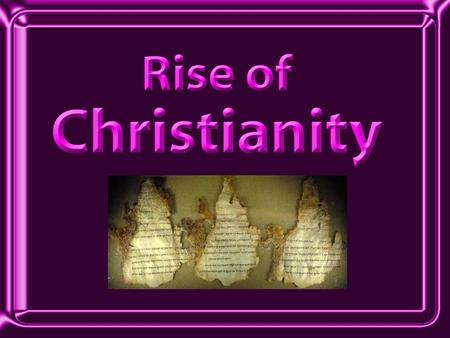 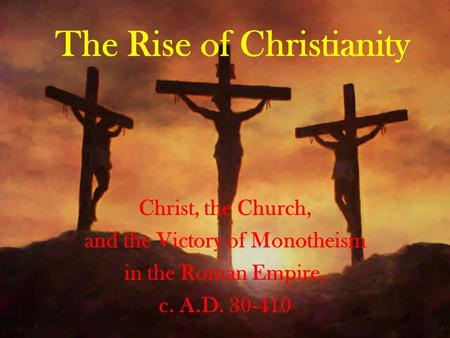