5 The Articles of Confederation

6 What was the Articles of Confederation?
America’s first national government (it failed). The Articles lasted from The Articles of Confederation were crafted from a combination of urgent necessity and past experience. After the colonies declared their independence in 1776, the leaders needed a government to oversee the operation of the war and, if victorious, help the country settle the peace. Fundamental issues needed to be addressed: How much political power should be given to the central government when cooperation among the states was so important? Would France gamble on aiding the fledgling nation if the United States appeared weak? How would the central government speak for all the states while each state maintained its sovereignty? In 1777, the “Articles of Confederation and Perpetual Union” were drafted and submitted to the states for ratification, but the states didn’t approve the document until March of The Articles were modeled after the colonial charters, with the legislative branch having supremacy over the other branches. The Articles’ creators made sure that each state would remain sovereign and would retain all power not expressly given to the national Congress. This would insure that all decisions made by the government were subject to discussion and debate and that the states would never face a distant dominant power as when they were colonies under Britain.

7 What is a Confederation?
Articles established a “firm league of friendship” among the states where all states were equal. Bills were passed on nine of thirteen votes. Amending the Articles took unanimous consent of the states. The Articles established a government which it characterized as a “league of friendship” for common defense, communication with other nations, and to administer and operate the government. It was assumed that most legislation and enforcement of laws would occur within the states and that laws passed by the national Congress would only be to administer the powers it was given. Even so, any law passed would have to be carried by a “supermajority” of over 67 percent, with nine of thirteen states voting in the affirmative. To further insure that the central government would not be granted any increase in power, any amendment to the Articles needed the unanimous consent of all the states.

8 How did the Articles of Confederation Work?
Unicameral (single house) legislative body. Each state had one vote regardless of population size. Congress given sole authority to govern the country. The creators of the Articles believed that government was an agreement with the people and that power originated from the people. They further believed the best form of government was a republic, in which the people’s wishes were addressed by chosen representatives. The legislative body would be elected by and directly responsible to the people. Soon after independence had been declared, many smaller states expressed concern regarding the overlapping claims to western lands made by many of the states with larger populations. The small states feared their voices would be drowned out if representation was based solely on population. Thus, to equalize representation in Congress, each state had one vote—regardless of the size of its population. Congress was given the responsibility for governing the country; however, it wasn’t given much power to do so. An executive committee was meant to oversee the operations of the government, but it ended up serving more like a cabinet of advisors than as actual leadership. Congress had the authority to establish temporary courts to hear disputes among the states, but these courts could act only as mediators because they and the executive committee had no power to enforce the laws.

9 Declare war and make peace Make treaties with foreign countries
What were the powers granted to the government under the Articles of Confederation? Declare war and make peace Make treaties with foreign countries Establish an army and navy Appoint high-ranking military officials Requisition, print, and borrow money Establish weights and measures The Articles of Confederation granted Congress important powers to operate the government. When the document was drafted in 1777, the immediate concern was conducting the war and hopefully crafting a favorable peace treaty. To carry out the war, Congress needed the power to make treaties with foreign nations and to establish an army and navy and appoint military officers. Such powers gave Congress authority over affairs with foreign nations. To help pay for the war and for the operation of the government after independence had been won, Congress would need to requisition funds and to print and borrow money. This requisitioning power allowed Congress to ask the states for funds, which the states would provide if they were able or inclined to do so. Under the Articles, Congress also had the power to hear disputes among the states related to trade and boundaries. During and after the war, individual states sometimes established tariffs in order to raise revenue and discourage the sale of imports from foreign countries or neighboring states that competed with homegrown products. Other states targeted by these tariffs usually retaliated in kind.

10 What were the accomplishments of the Articles of Confederation?
Administered the seven-year war effort. Negotiated the Treaty of Paris with Britain in 1783. Established the Northwest Ordinance of 1787. Though they had many shortcomings, the Articles of Confederation cannot be considered a total failure. Under them, the government operated for nearly 12 years and managed to conduct a successful war of rebellion against what was then the most powerful country in the world. Under the Articles, the United States also negotiated a very favorable peace treaty in which Britain formally recognized the United States and agreed to remove all British troops from U.S. territory. From the land granted to the United States as a result of the treaty, the country doubled in size, gaining land that today holds the states of Ohio, Indiana, Michigan, Illinois, Wisconsin, and part of Minnesota. Many historians view the Northwest Ordinance as the most important piece of legislation to come out of this period. The Ordinance provided a method for admitting new states into the Union and for placing them on an equal footing with existing states. Thus, citizens from these new states would enjoy all the rights for which Americans had fought in the Revolution. The Ordinance even provided a bill of rights, something both the Articles and the original Constitution lacked. Map of the land settled in the Northwest Ordinance of 1787

11 What powers were denied to the government?
No power to raise funds for an army or navy No power to tax, impose tariffs, or collect duties No executive branch to enforce laws No power to control trade among the states No power to force states to honor obligations No power to regulate the value of currency The Articles didn’t provide the government with enough authority to fully carry out the tasks it was given. Though Congress could declare war and raise military forces, it couldn’t pay for them because it lacked the power to tax. Congress could requisition funds from the states, but had no power to make them part with their money. Congress could borrow money, but had no way to raise funds to pay off the debt except to ask the states for funds. If a state disagreed with the way Congress spent the funds, it would refuse or delay payment. Congress could appoint a court to hear the disputes between states, but it couldn’t enforce decisions the courts made. Thus, if a court ruled in favor of one state over another, the losing state wouldn’t have to comply with the decision. After the war, the Treaty of Paris stipulated that British citizens still living in the former colonies would receive compensation for land or property seized. However, individual states did not force their citizens to make such restitution and Congress had no authority to compel the states to obey the treaty’s provisions. To pay off the debt from the war, Congress was authorized to print money; however, each of the states had the power to print money as well. The resulting increase in currency, combined with a slowdown in the postwar economy, sent the young country into a deep economic depression. Inflation rose so high that the Continental Dollar became virtually worthless.

12 The Influences of the Constitution

14 What was the Magna Carta?
Written in 1215. First document to challenge the authority of the king. Created Habeas corpus, or the right to due process (rights for accused criminals)and a trial by jury.

15 What was the Mayflower Compact?
Written in 1620. The first agreement for self-rule and majority rule for Americans.

16 What were the English Bill of Rights?
Written in 1689. Guaranteed free elections, Free Speech, outlawed cruel and unusual punishments, established representative government where laws were made by a group that acts for the people .

18 What was the Constitutional Convention?
In 1787, delegates (representatives) from 12/13 states met in Philadelphia to make changes to the Articles of Confederation. They decided to create a new government.

19 What was the New Jersey Plan?
Plan by the representatives of New Jersey to split the nation’s legislative powers equally. The plan favored smaller states that had less people.

20 What was the Virginia Plan?
Plan by the representatives of Virginia to split the nation’s legislative powers based on population. The plan favored bigger states with more people.

21 What was the Great Compromise?
Created two houses (bicameral) in the legislature. Each house would have unique responsibilities. One house was divided equally, the other based on population.

22 What was the 3/5’s Compromise?
The issue of slavery was becoming a divisive issue in America. The 3/5’s compromise was a compromise between slave (Southern) and non-slave states (Northern). Slaves were counted as 3/5’s a person.

25 Who were the Federalist?
The Federalist were people who were in support of the Constitution. Federalists tended to be richer, lived in the coasts, and were in business.

26 Who were some of the famous Federalists?
Alexander Hamilton- First Secretary of State. James Madison- 4th President and Father of the Constitution. John Jay- Co-author of Federalist Papers.

27 Why did the Federalist support the Constitution?
Federalists felt the stronger Constitution would make the country work better.

29 Who were some of the Famous Anti-Federalists
Patrick Henry- Virginia Representative. George Mason Wrote Virginia’s Constitution.

31 What were the Federalists Papers?
85 newspaper articles that explained and promoted the Constitution. Written under the name; Publius by Alexander Hamilton, James Hamilton, and John Jay.

32 The Bill of Rights

38 5th Amendment The 5th Amendment protects people from being jailed without being charged. You don’t have to testify against yourself in court. (Self-incrimination)

41 8th Amendment The 8th Amendment guarantees that punishments will be fair and not cruel, and that extraordinarily large fines will not be set. 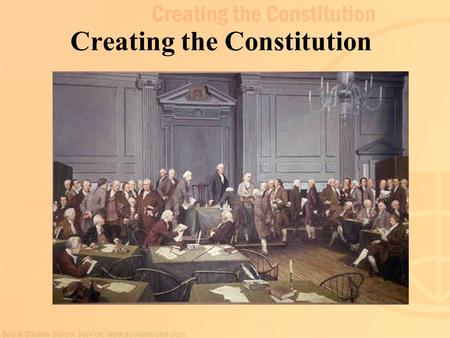 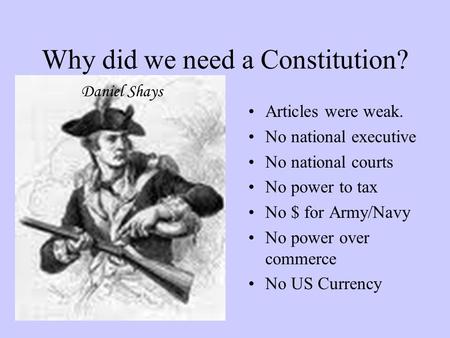 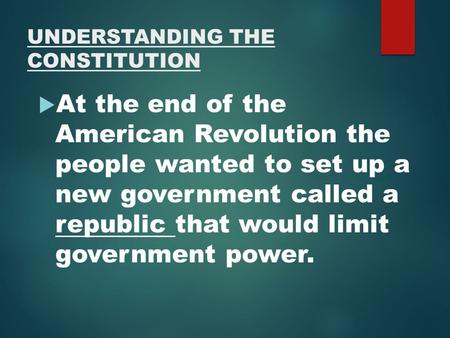 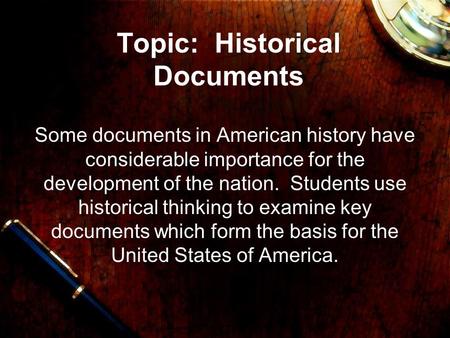 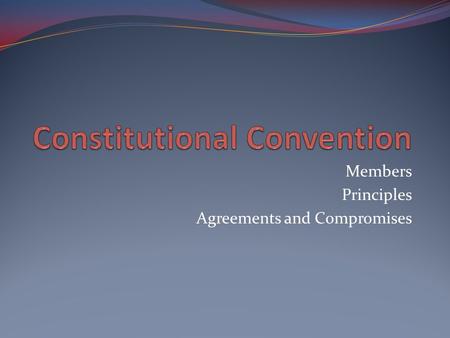 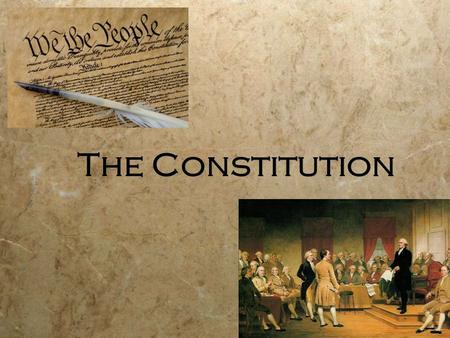 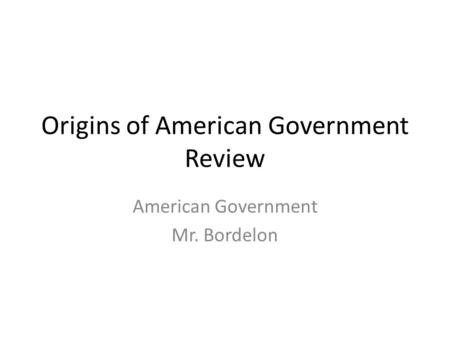 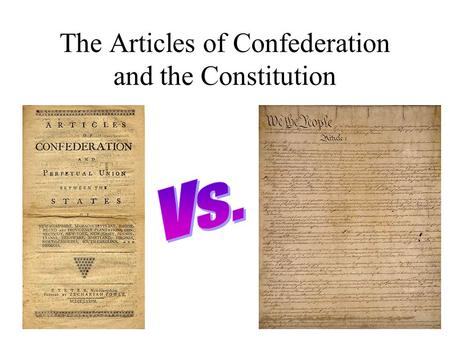 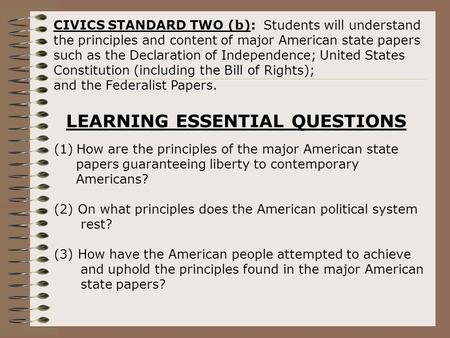 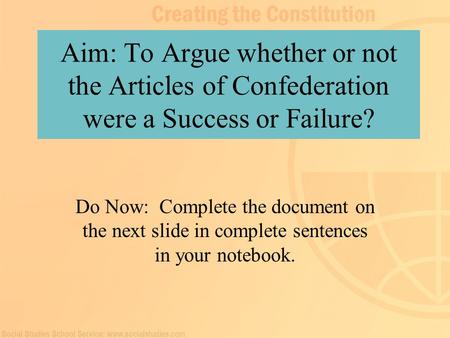 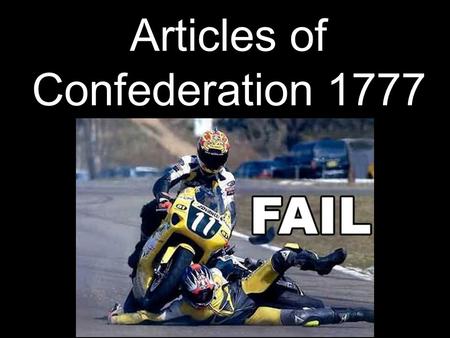 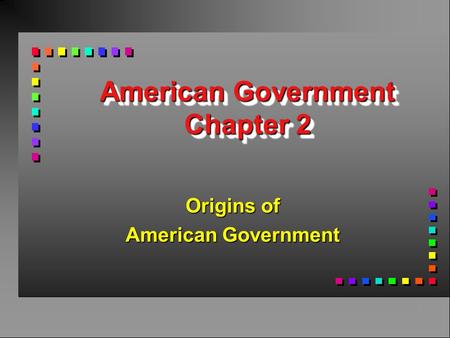